(Beth just came upstairs holding her milk carton, "I got buttermilk!" We could tell she wasn't happy! She put some in her tea and she said it made it "chunky." Eeewwww! I put some of our milk into a mason jar and she took that back downstairs. She's now making herself a new cup of tea!)

On Monday she had a doctor's appointment for her alopecia. Our family doctor diagnosed it a few years ago but the meds weren't helping so we went back and she thought maybe it was an iron deficiency but that hasn't helped. She sent us to a dermatologist and he says it's definitely scarring alopecia. He said the part of her scalp that is already bald cannot be reversed but the new meds should slow the progression in the rest of it. Thankfully pulling the top of her hair back in a small pony tail hides it. Of course the medicine the dermatologist prescribed wasn't covered by her insurance so they had to find another one that they would pay for. I'll be picking that up tomorrow.


Our view from the waiting area 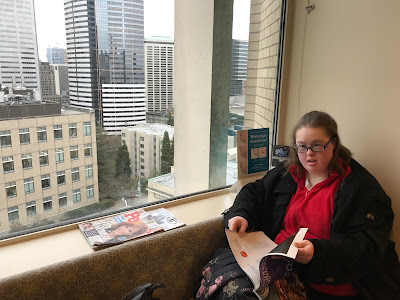 The doctor had me take photos while he measured the area. We'll go back again in February to check it's progression. 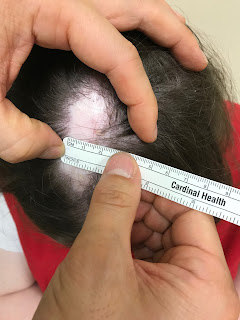 Poor thing!!! At least there are other med alternatives since insurance just BITES :(

Such a bummer when insurance doesn't cover the medicine you want!

Praying it works for her. ((Hugs))