She Might Cry Tonight But The Change Will Be Good

Beth works at Little Caesars two evenings a week. She folds boxes, sometimes 300-400 in a three hour span. She loves her job and the people she works with. The problem though, is that her job is about 45 minutes from our house. And that's on a good day.

There is usually SO much traffic, it's known as a bottleneck here in Seattle. When people hear you have to take that route to get somewhere, you'll hear moans and groans. It's a long, grueling trip and no one likes it.

Well, Beth has been taking that trip (riding the DART bus each way) for more than 2 years. Sometimes she's on the bus for 2 and a half hours each way which means she's gone from the house for sometimes 8 hours... for a 3 hour shift.

And the poor DART drivers! One night they dropped her off at home at 10:20! I asked the driver if he was headed home and he still had one more person to drop off! It makes for a long day for everyone.

Beth's job coach has been searching for a store closer to our home that would hire her to do the same job. Some stores are franchises and they don't have a position of 'box folder'; others don't have the hours to spare.

But today she found a store willing and able to take Beth! The same woman owns both stores, the one Beth is at now and the one she'll be going to and she was willing to hire her at this new place! She heard how beneficial Beth was and what great job she did, so she was willing to let her switch!

And... the new store is only about 15 minutes from our house. I'm so relieved.

I told Beth about it this morning over breakfast and she was sad at first. I could see her starting to tear up, but the more we talked about it, the more excited she got! She met this new manager a few weeks ago and when I told her K would be her new boss, she smiled and her eyes lit up.

She ended up making a card for everyone at the store tonight, then I printed off a picture of her in her uniform and we put it on the front. She wrote a beautiful sentiment inside and I expect she might cry as she leaves work for the last time.

But I know she's gonna love this new place. We plan to take her by the store tomorrow so she can see where it is and it won't be a big shock to her come next weekend. It's such a relief knowing she won't be so far away and she won't have to spend 6 hours on the bus! 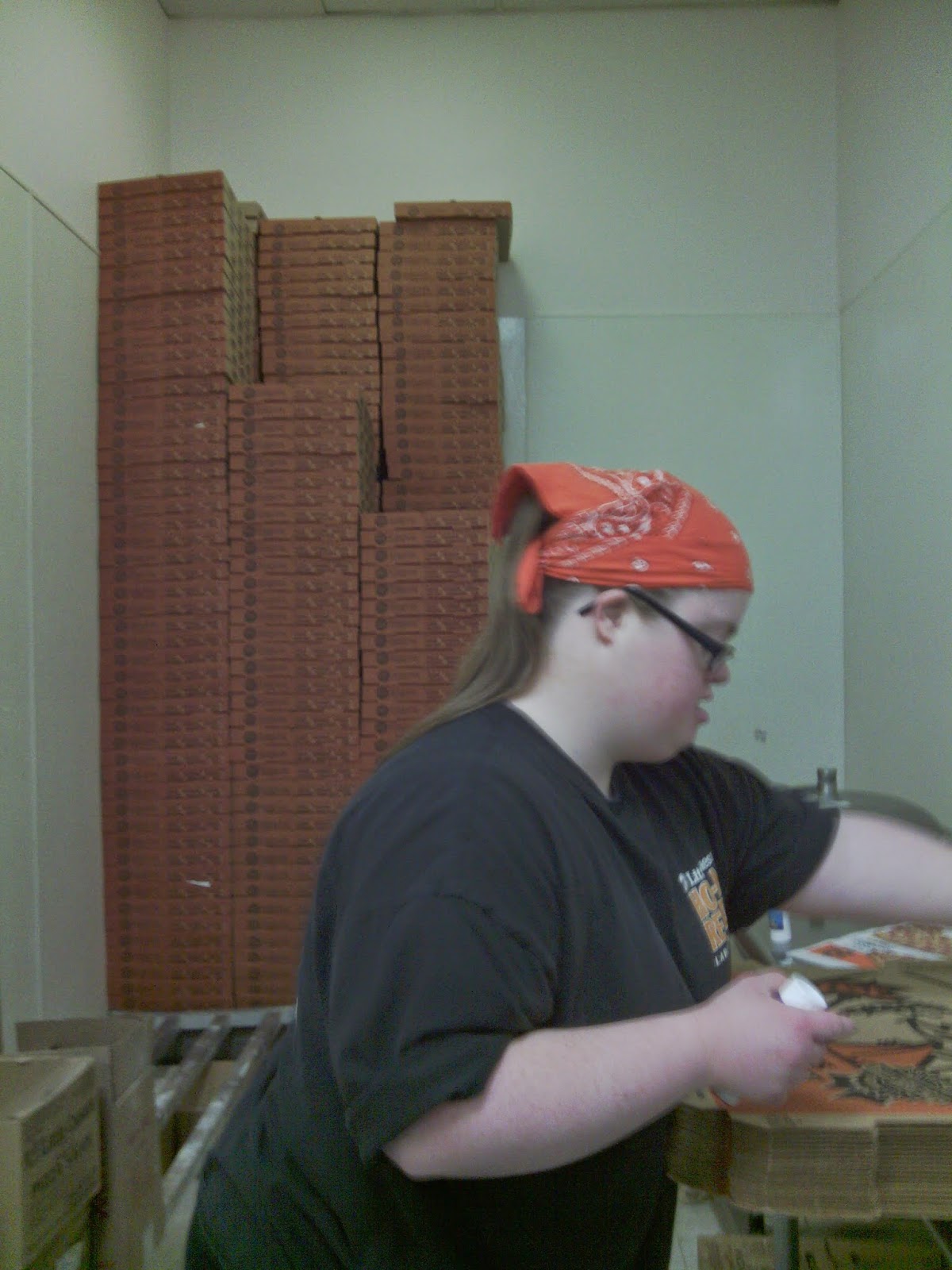 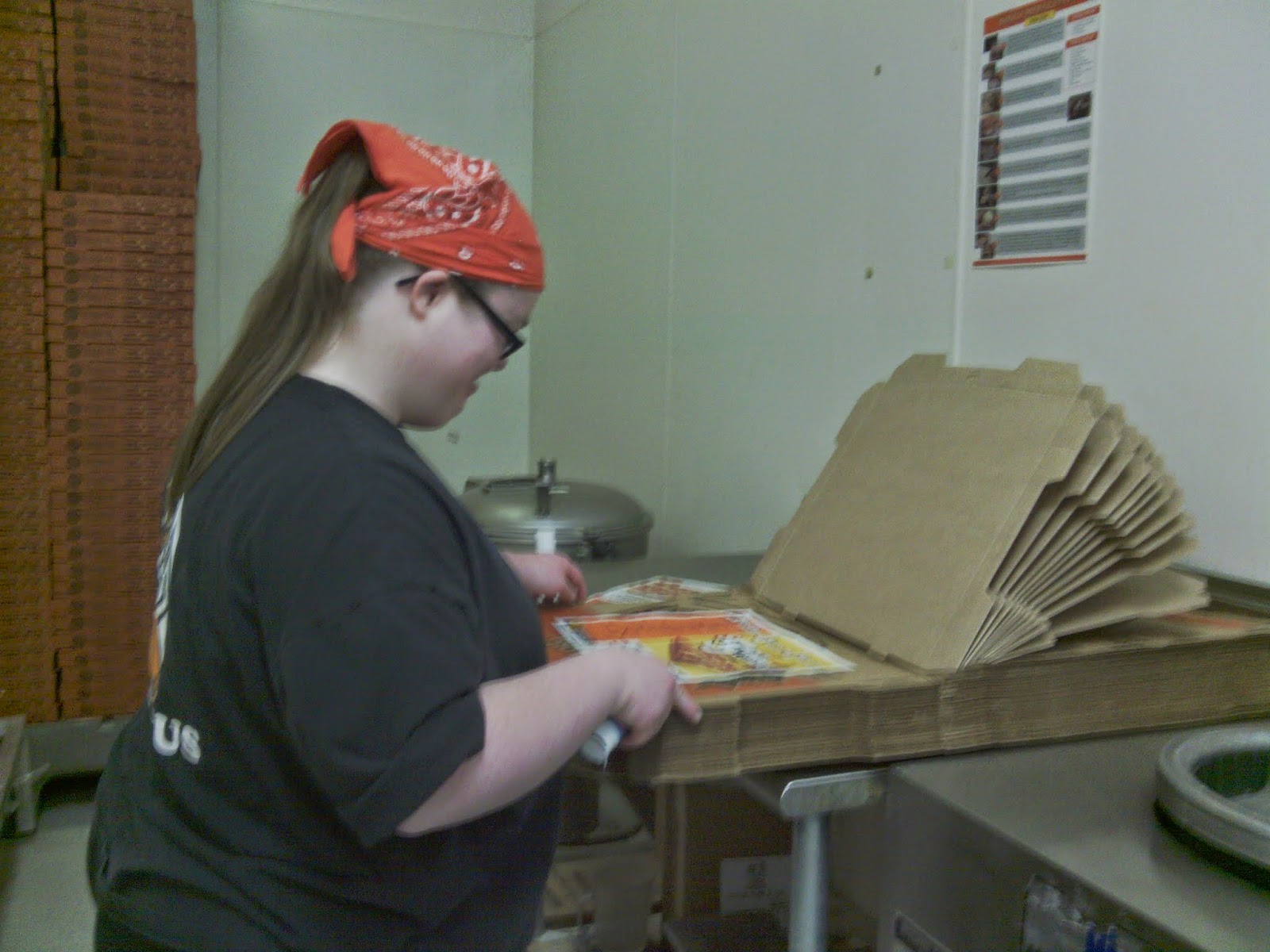 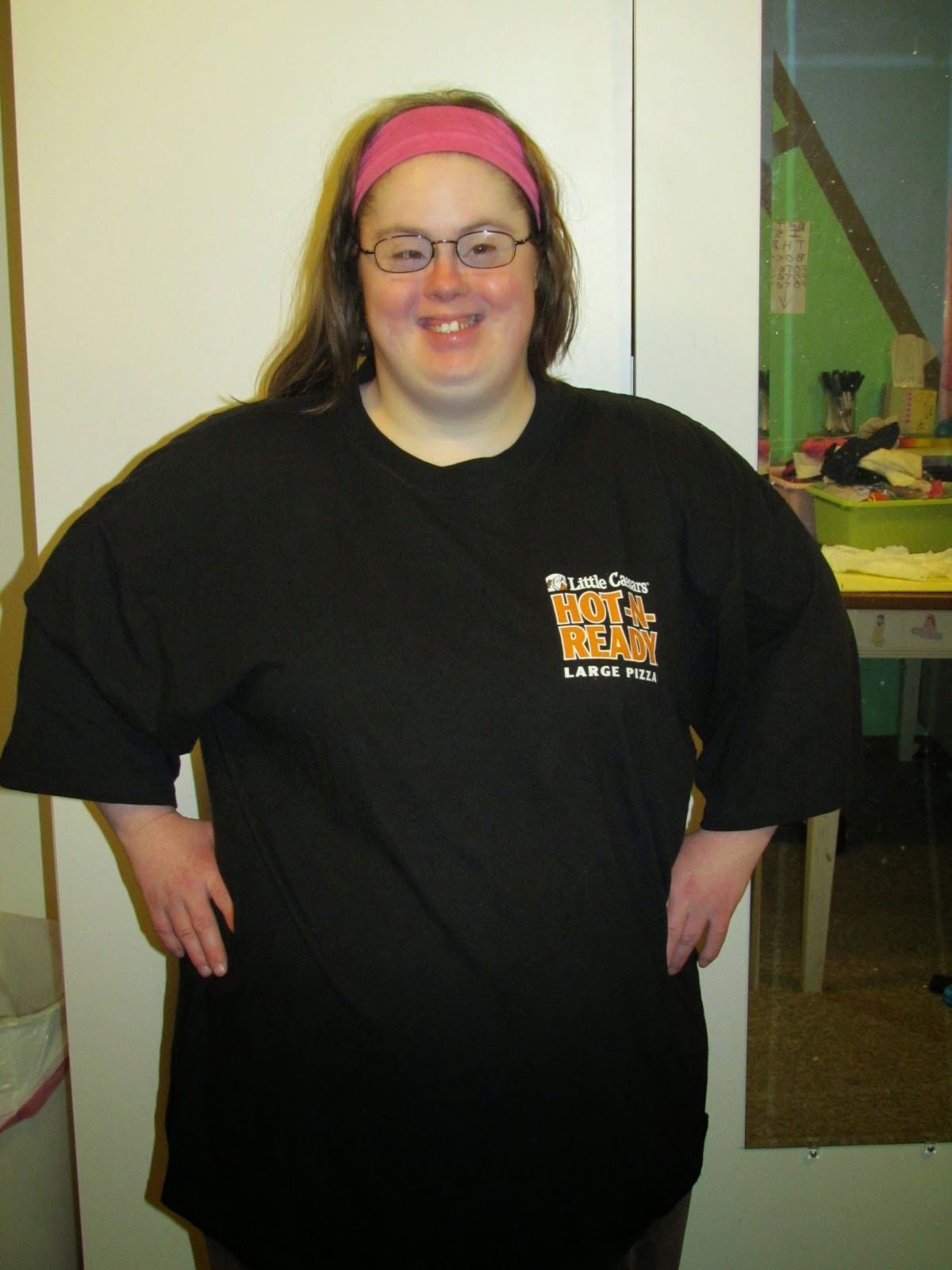 Back at work this week. Things are a little slow and I'm okay with that.

Beth takes an art class on Wednesdays and last week she came home with a cake. Yep, a real cake! When she said she had a cake, I asked her if she had painted it but nope. A real one, with eggs and flour and frosting! I guess everyone got to mix their own ingredients, then someone took the cakes, went and baked them (they don't have an oven on site) and brought them back for everyone to take home! What an amazing amount of work! 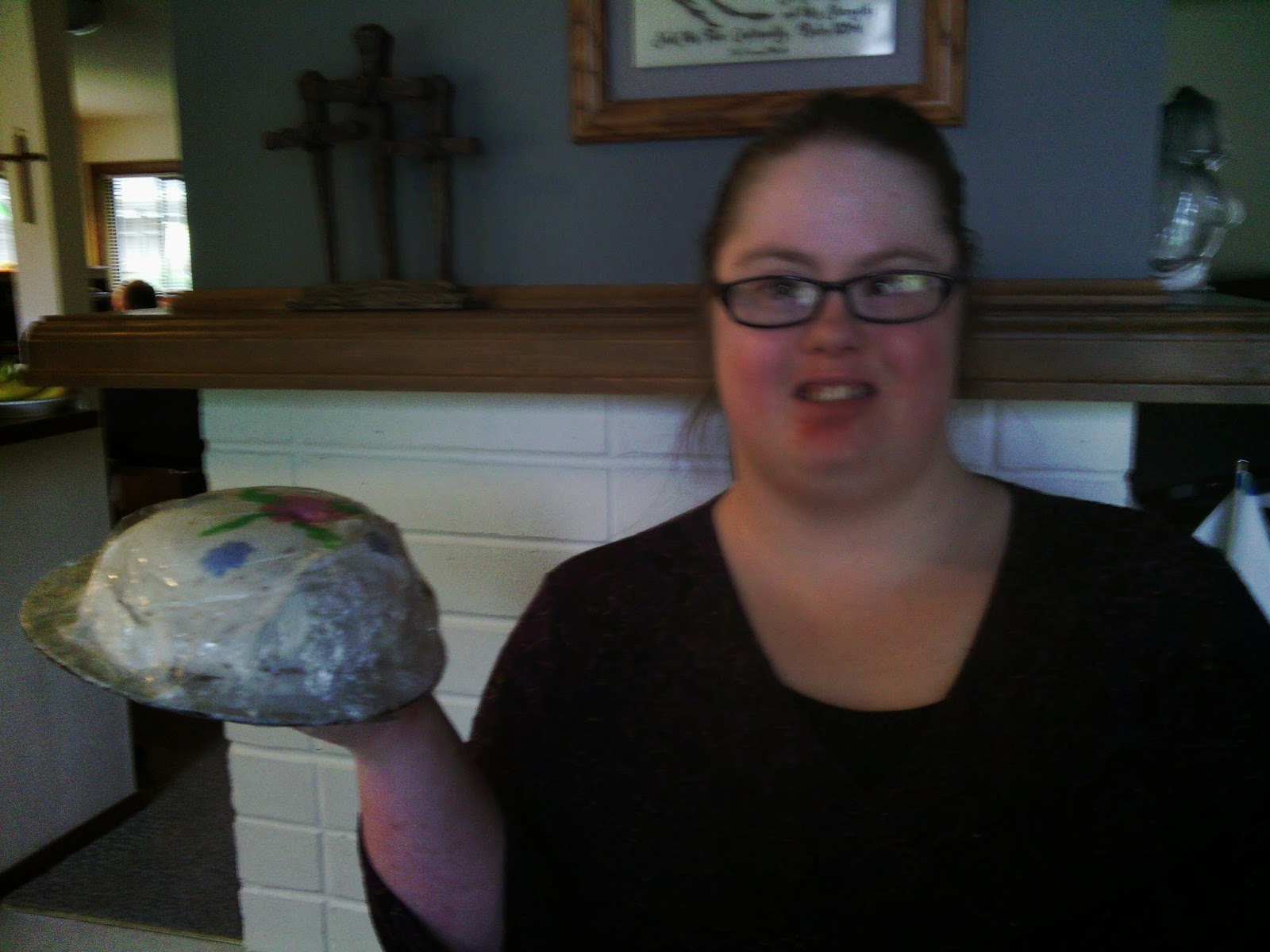 Diana bought a new car. It was a big decision but she finally did it! This thing has a sun roof, heated seats, side mirror defrost... it's gorgeous! 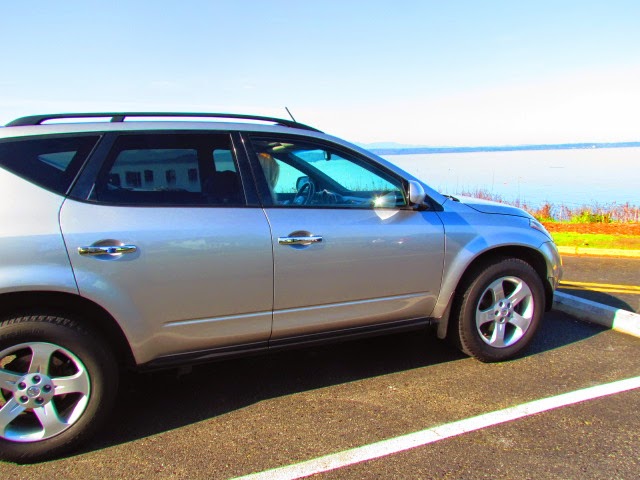 I babysat Allie on Saturday and it was cold and rainy for most of the day here. Of course. It IS Seattle after all. :) So we stayed in and made forts, worked on our reading and played with bubbles! 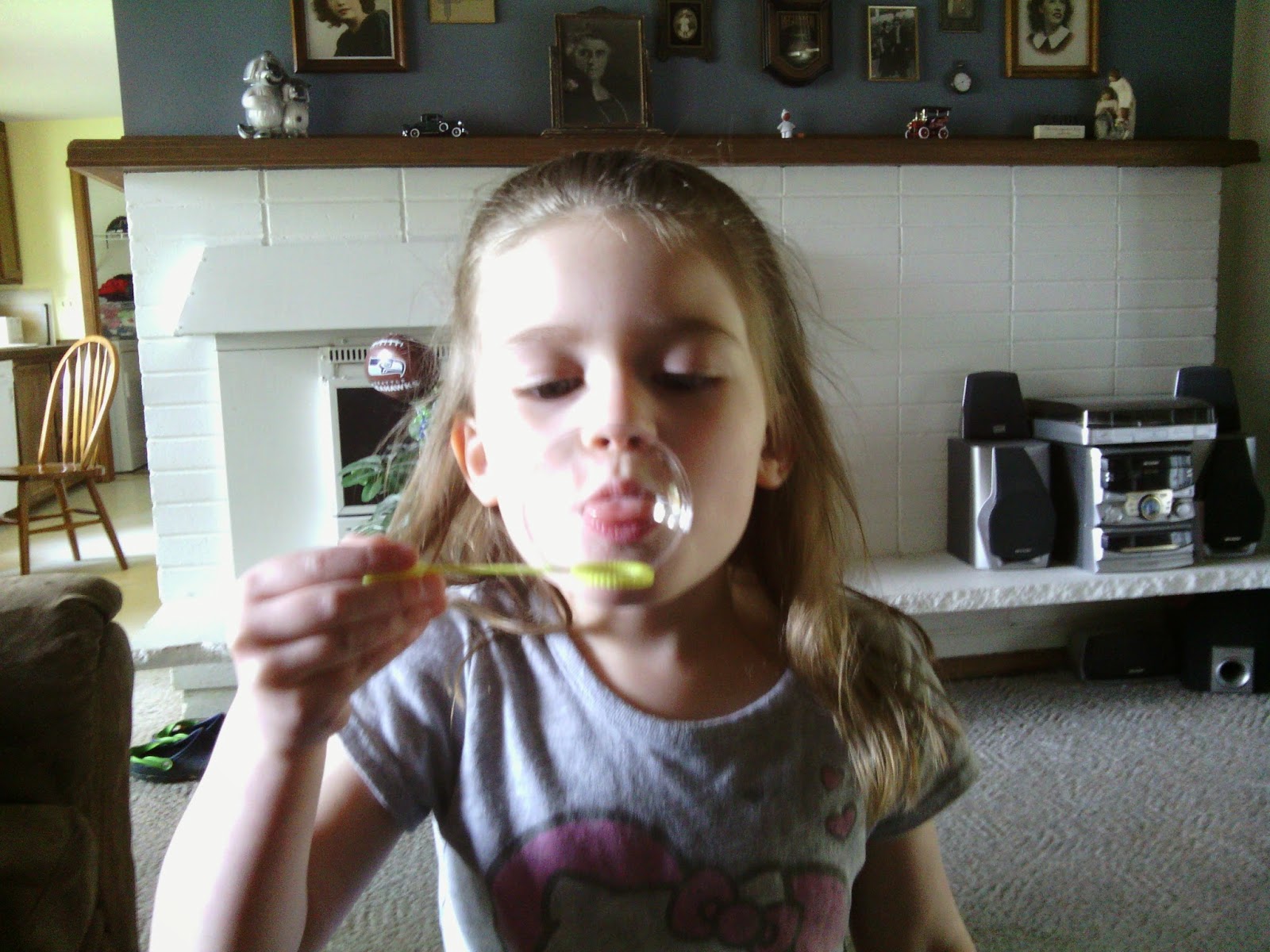 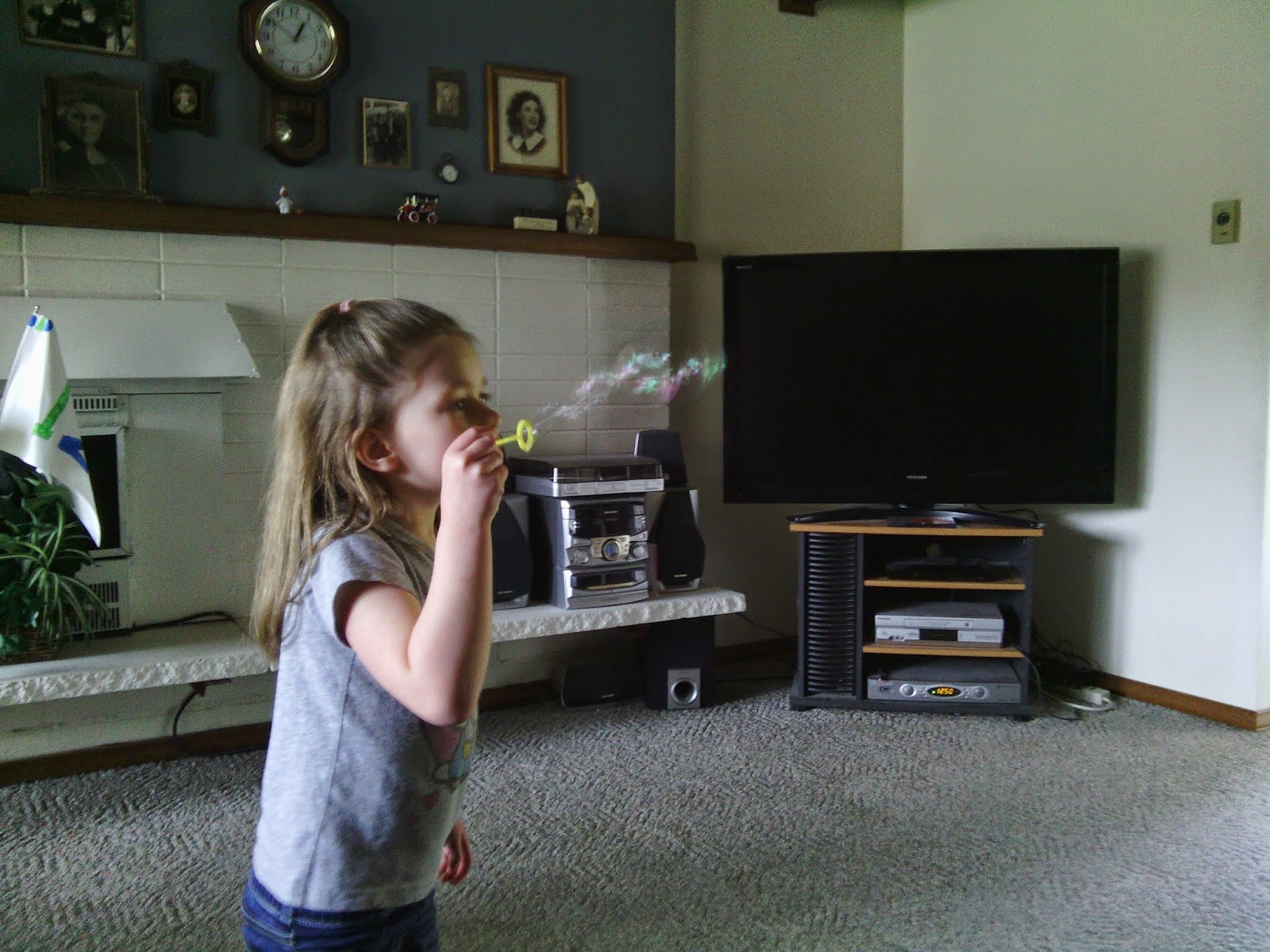 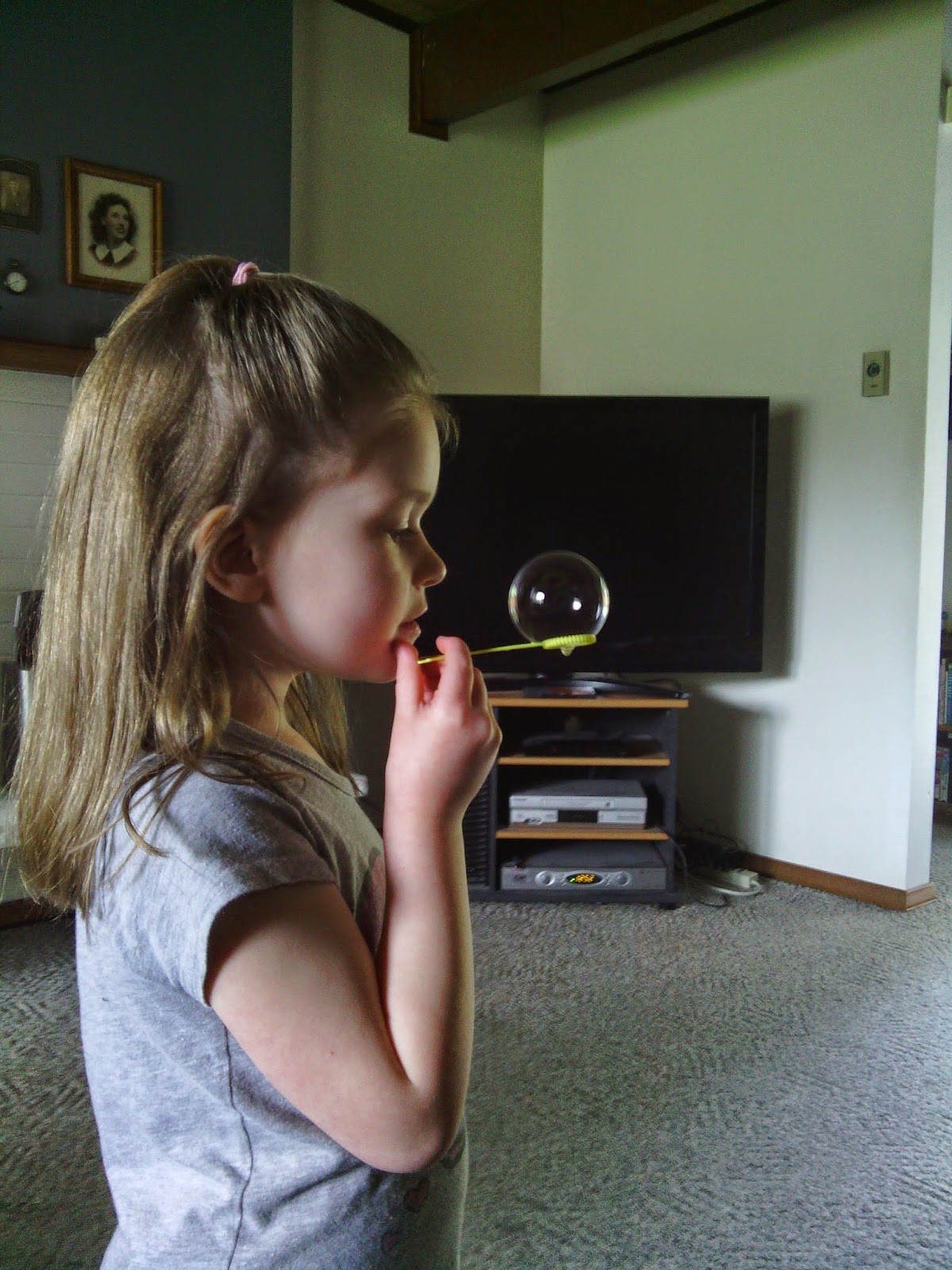 Today I was able to get outside and work in the yard a little. I cut back some blackberry bushes and started to pull some weeds when I could hear these huge bees. They were black and yellow bumblebees and were so big! I was pulling weeds around some bluebonnets and I certainly wasn't gonna compete with them so I let them have the flowers! I ended up pulling out a chair and just sat on the patio enjoying my backyard. 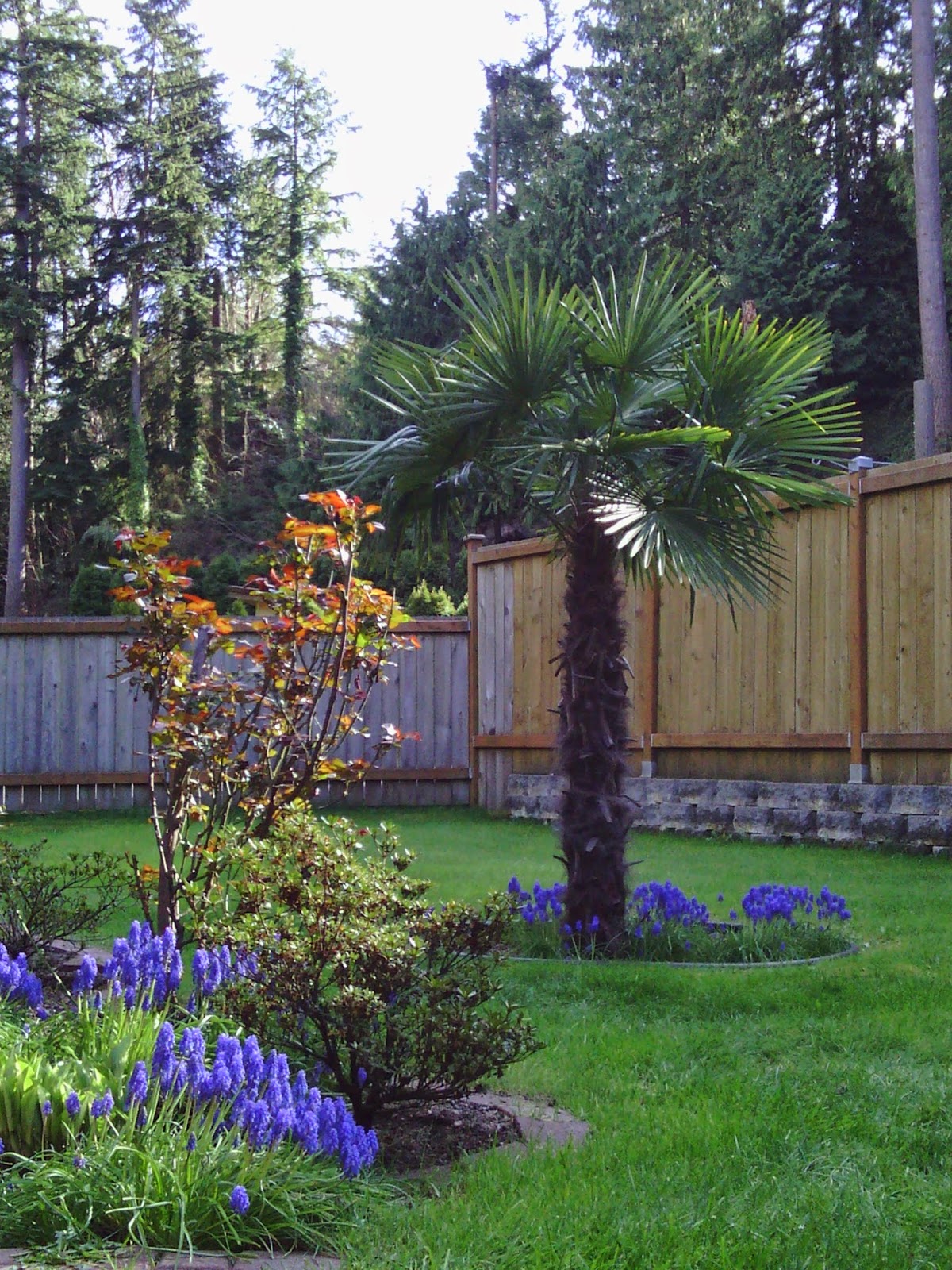 I hope you all have an opportunity to enjoy some flowers this week!
Posted by Cindy at 9:12 PM 2 comments:

Animation at the Grocery Store Checkout

For those of you who know Beth, you know she's very shy. If you say hi to her, she puts her head down and barely says, "Hey". When her bus drivers drop her off, they walk her toward the porch and usually wave and yell, "Bye Beth!" as they had back to the bus. She'll continue to the door and without looking back, say, "bye" but it sounds more like a grunt than a friendly goodbye. She's quiet and reserved and introverted.

Unless we're at the grocery store.

Beth and I went the other night and she was a completely different person! She stopped in front of the granola bars, pointed to them and said, "I can't decide if I get some or not." So we looked at the different kinds they had and checked the prices and she finally decided to buy some.

In the produce section she reminded me that we needed bananas. I grabbed a couple of oranges and she quickly got a plastic bag for me. She talked to me about Chuck liking oranges and what kind of apples we would buy.

Then we got to the cashier and she told me I could go first. She helped me unload my groceries and she pointed out Chuck's favorite gum, told me she was low on batteries, asked me if she could get cash back... she was talking up a storm!

When I paid, the change dropped into the little change bowl and she yelled, I mean, really loud for Beth, "Gimmee, gimmee, gimmee!" and then she laughed! I told her, "No way! This money is mine, chick!" And she laughed again.

The cashier said hi to her and she responded appropriately. Loud and clear. When her change dropped in, she reached for it and said, "Come to mama!" Seriously??! Who ARE you?!? 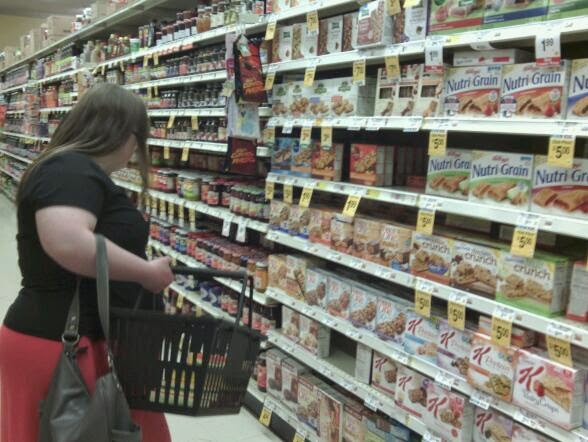 Email ThisBlogThis!Share to TwitterShare to FacebookShare to Pinterest
Labels: Adult with Down Syndrome, Grocery shopping, Happy

It's been a good week.

Daylight Saving Time, I stepped outside early this morning and was immediately brought back to my childhood. The smell of the pine trees, the birds chirping, the crisp cool air, overwhelmed my senses and reminded me of camping at Green Valley Falls in the mountains east of San Diego. 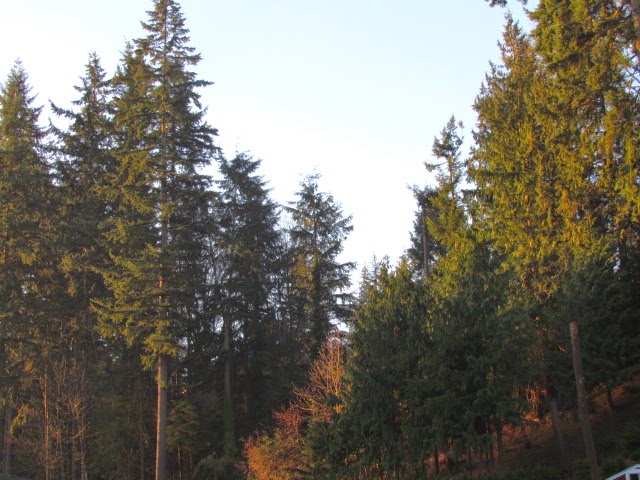 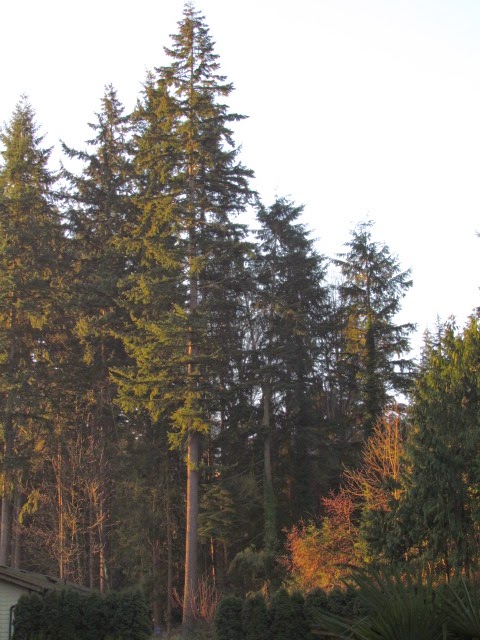 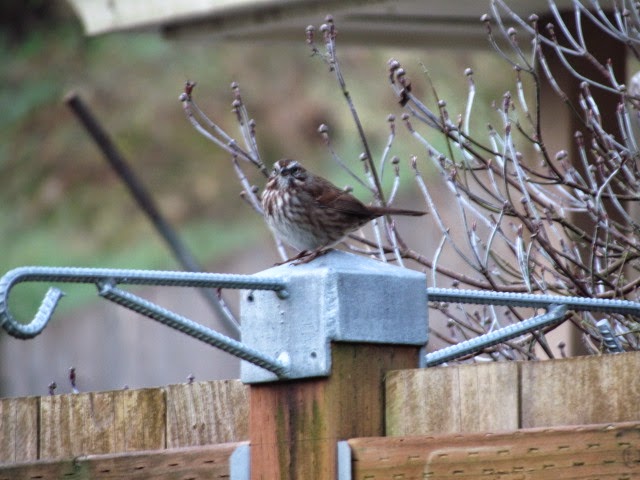 
Anyway, I just stood outside for a while, breathing in the cool air and smiling at the sights and sounds. So grateful I could get this just by stepping out my back door.
Diana and I took walks along the marina. 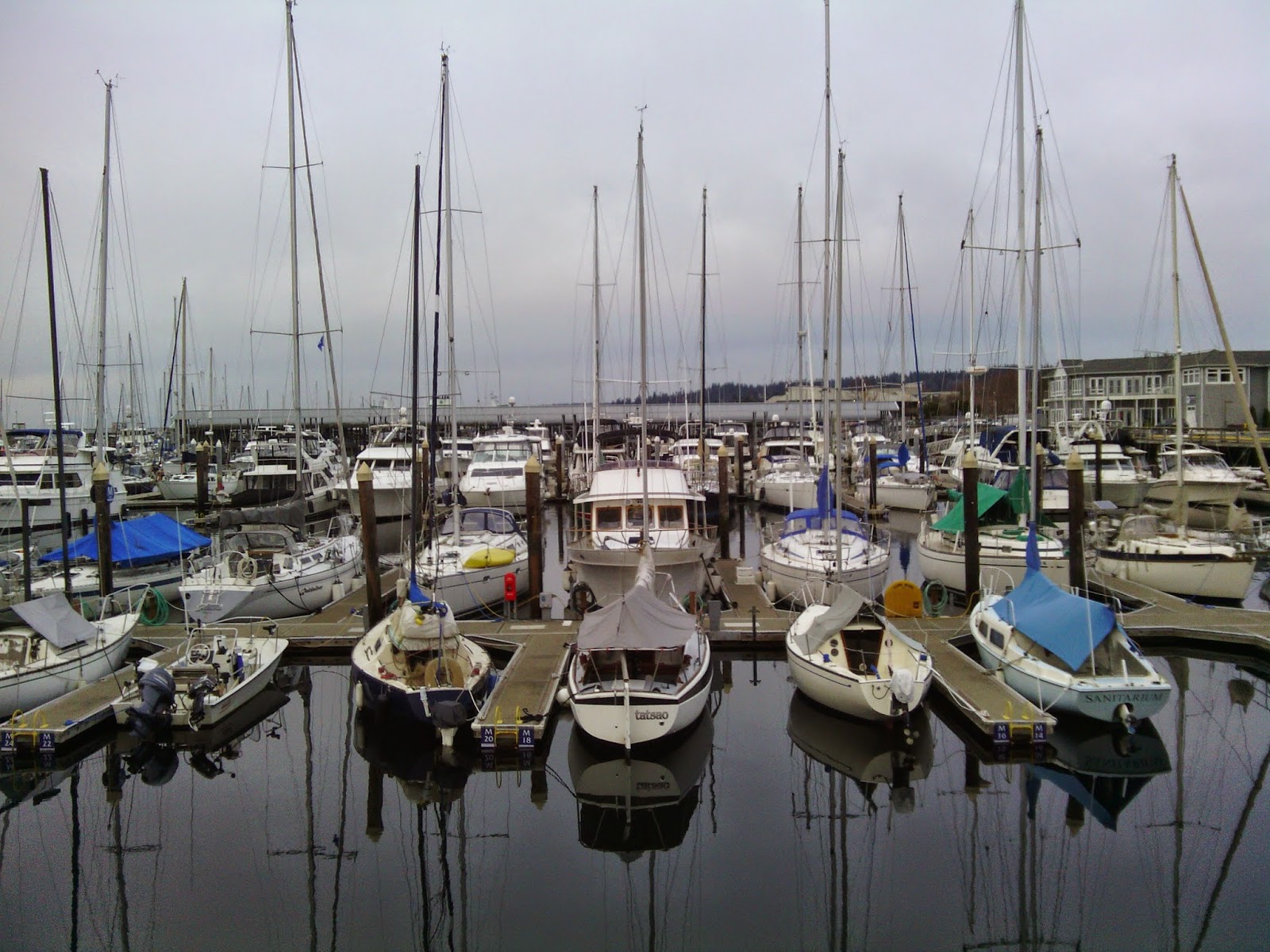 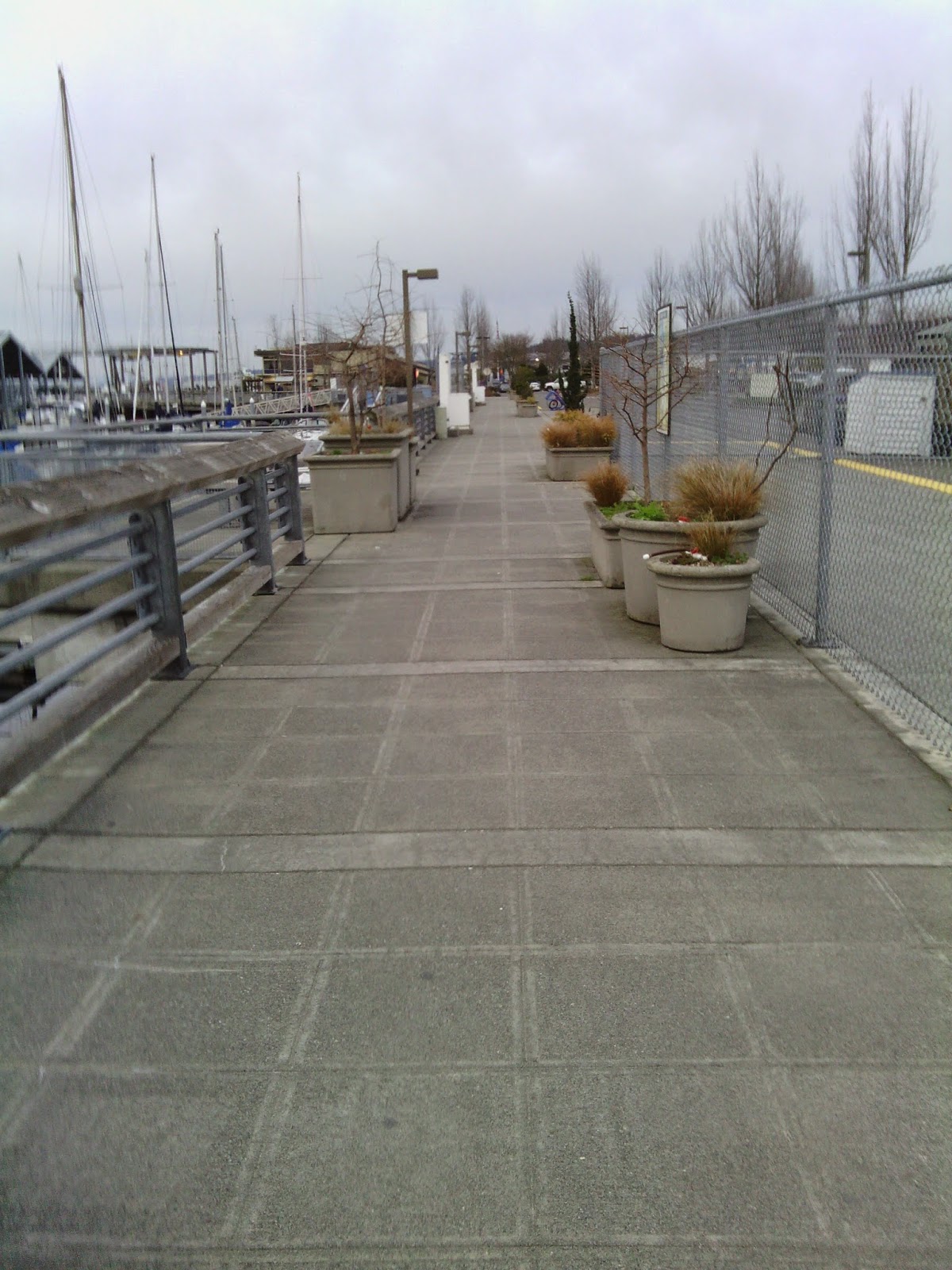 I forced myself to relax this week. I got bored but I embraced it. :) I got tired of sitting around but I made myself do it. IT. WAS. WONDERFUL!!
I spent some time in prayer, pouring my heart out to the Lord about our circumstances. I cried at times, I actually laughed myself to sleep one night! (I'm unique, I know. Don't judge.) :)
It was a good week but tomorrow I head back to work. To be honest, I've kinda missed it. It will be good to get back to my usual routine, see my friends and coworkers.
I hope you all have a very blessed week.
Posted by Cindy at 8:45 PM 2 comments:

The Sound of Silence

That's the agenda for the week.

There's been so much stress in my life lately, the last 6 - 8 months have been overwhelming to say the least. Not everything affects me directly, but it still takes a toll emotionally. I've even noticed some physical effects from all the stress.

So I took this week off from work and I'm staying home. Sleeping in. Spending time with the Lord. Getting quiet. Reading. Praying.

I need some time just to quiet my thoughts.
Posted by Cindy at 11:55 AM 3 comments: