Her Co-Workers Don't Know What To Think

Beth's job coach, C called me the other day to tell me that Beth absolutely l-o-v-e-s her new job!

At the old location she would fold approximately 250 boxes per 3 hour shift. She's been at this new location now a little over a month and already she's folding 350 boxes in the same 3 hour shift!

C told me that she saw Beth's co-workers eyes get as big as saucers as they watched her fold boxes. When the store manager agreed to hire Beth, she was the first person with special needs to work there and they had no idea what to expect. They were shocked at how many she was folding! She was going so fast, that they were running out of space to put them all! Finally C asked if she should start folding a different size and they said, "Yes please!" They just stood there, watching her work!

She is blowing them away with her ability to do the job and do it well.

Beth is changing the culture where she works and showing that people with special needs are just like everybody else. Capable, eager to work and deserving. 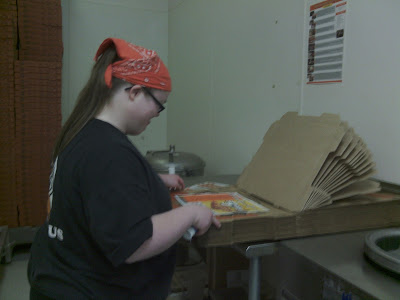 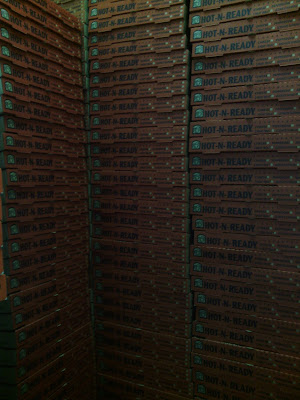 I Know They're Out There, So Where Are They?

Beth, Diana and I went to the grocery store recently and there were so many people that looked at Beth. As I'm walking toward them, I can see their eyes are on her. 'They probably haven't seen anyone with Down Syndrome in a while, if ever,' I thought to myself.

There's one man who works at our grocery store and he and Beth know each other from back in high school. He and I will sometimes talk when I'm there, just about work and his love for music.

When we were out to dinner for Mother's Day, a gentleman came up to our table and waved at Beth. She shyly waved back and I asked her if she knew him and she said, "Not really." He had Ds and looked like he was maybe 40 or even older. He told us that he recognized Beth from Special Olympics. We think he said 'Special Olympics swimming' but Beth was only 9 when she swam in SO, so we're not sure. We talked with him for a minute and then he went back to sit with his family.

So that makes... two. Two people with Down Syndrome in the last, how many months?

I know they're out there. There are a few adults in the All Aboard program, but not a lot. So where are they? How do they spend their days? I'm curious about where they're hiding. :)
Posted by Cindy at 1:07 PM No comments:

Mom's Always The Last To Know

Beth's social group All Aboard recently moved to a bigger facility. They've been painting and getting things ready for the kids this week and have been posting pictures on facebook. Since Beth doesn't have a fb page I asked her if she wanted to come take a look at all the photos.

We spent about 10 minutes in front of the computer looking at all the pictures and she pointed out all her friends.

She then heads back downstairs and Diana comes home from work. I start dinner and Diana's checkin' her phone when she yells, "Chickenbutt?!?" (That's the pet name her and Beth have for each other. It really is a term of endearment for them!) Diana runs downstairs and I can hear her and Beth talking for a few minutes.

Diana comes back upstairs and kind of whispers to me, "Did you know Beth has a boyfriend?"

"Yea. She was just telling me about him. N sits next to her while they're at All Aboard."

"And he holds her hand."

"And according to her text, he's kissed her on her head."

Her and I sat up here looking at pictures of all her friends and she never once mentioned him!!

Diana says, "Of course not. You're the mom!"

Beth sent me a text today telling me her score and how she did at bowling. I texted her back and told her that Diana had told me about N and I asked her if he was there today and she wrote back, "Yes crazy mothera!" That was all she wrote!

I came home from work today, she never said a word about him.

We went grocery shopping, still nothing!!

Email ThisBlogThis!Share to TwitterShare to FacebookShare to Pinterest
Labels: Adult with Down Syndrome, Boyfriend, Independent, Secrets

The Hard Stuff About Having Down Syndrome

This blog was started as a way to share what we've learned about Down Syndrome and I know I haven't been writing too much about it lately. But that's because our lives are just... our lives. Down Syndrome isn't always the focus anymore because I realize we're the ones with the issues, not Beth.

There was one day recently where the speed at which Beth lives was really frustrating me. We were at the grocery store and I told her I had a lot to buy and only a short time to buy it so we were gonna have to hustle. She got her cart and I got mine. As we're shopping I'm thinking about everything I need to buy and crossing things off my list... We get to the cashier and she begins 'helping' me pull my stuff out of the cart, one by one by one. I took a deep breath and realized she really was moving as fast as she could. Faster than her normal speed. So I thanked her and moved up to pay the cashier. After I paid I moved out to the aisle to give her room at the cashier. She hollered at me, "Hey!" really loud and it made the cashier and bagger laugh. I told her I wasn't leaving yet and that's when she asked if she could get some cash back. I helped her through the process and then we left.

As we're headed to the car she tells me, "I really hustled, huh?" She was so proud of herself and yet I had been so focused on getting everything done that I hadn't really noticed. But she really DID move fast in that store. We left the house, bought a lot of groceries and were on our way home again in just under an hour. I put my arm around her and told her that I was proud of her. That she did great!

So, I'm finding that a lot of the stuff that makes having Down Syndrome hard, isn't always because of Beth. Too often it's because of me. I'm the one that makes it hard.

I'm impatient. I'm frustrated. I have a short temper. My expectations are wrong.

Beth lives her life happily, going about her day to day activities with a smile on her face knowing it's gonna be a good day.

I go about my life angry that someone cut me off on the freeway. Frustrated that the computer is too slow. Worried about tomorrow.

Beth has her routine and is happy to have it. She doesn't have any enemies. No regrets. She's content with her life and the people and things in it.

Email ThisBlogThis!Share to TwitterShare to FacebookShare to Pinterest
Labels: Adult with Down Syndrome, Family, Life

We Didn't Expect To Find THIS in Her Couch!

Things have been so busy for me the last few weeks. I'm usually really good at guarding my time and making sure I don't overdo it but that hasn't been the case lately.

We have an odd shaped closet with a very long rod. There is only one bracket holding the rod and it tends to bend between the one bracket and the walls. So we bought two more brackets and Chuck and I pulled all the clothes out of the closet and finally hung them. I know it's a small thing, but what a difference it makes!

Over the weekend Beth and I helped a friend set up for an event she was having. Centerpieces, place settings, wall hangings. There was a lot to do and Beth really hustled! I was surprised at how much she enjoyed doing it and how well she did it! There were a couple tables already set up so we were able to just copy the placement of everything. It was really fun! 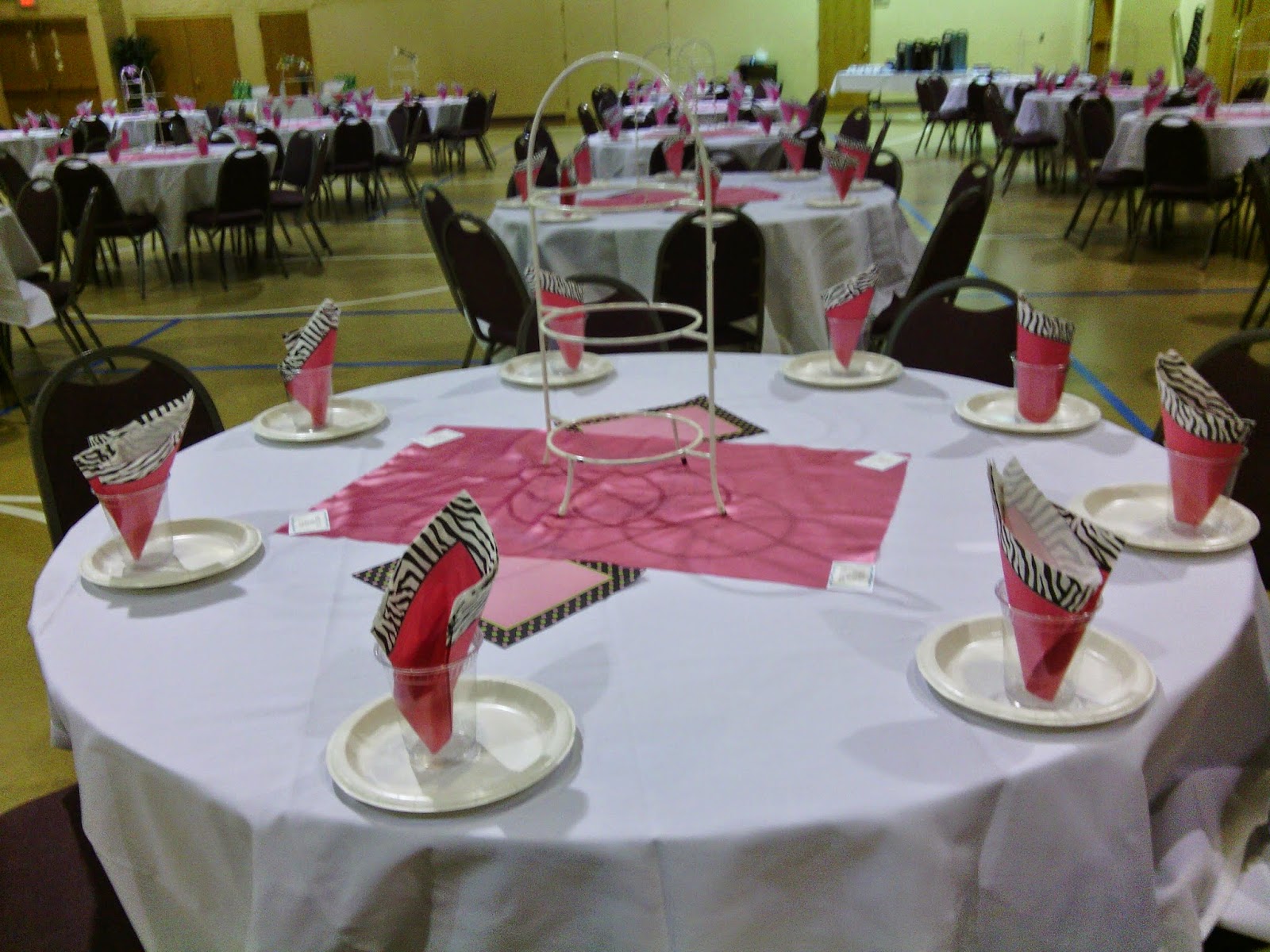 Beth, Allie and I went shopping last night. What an adventure taking the two of them out together! They wrestled and played in the car, (even though Beth was in the front seat and Allie in the middle seat!) they played in the store, SO much energy from those two! 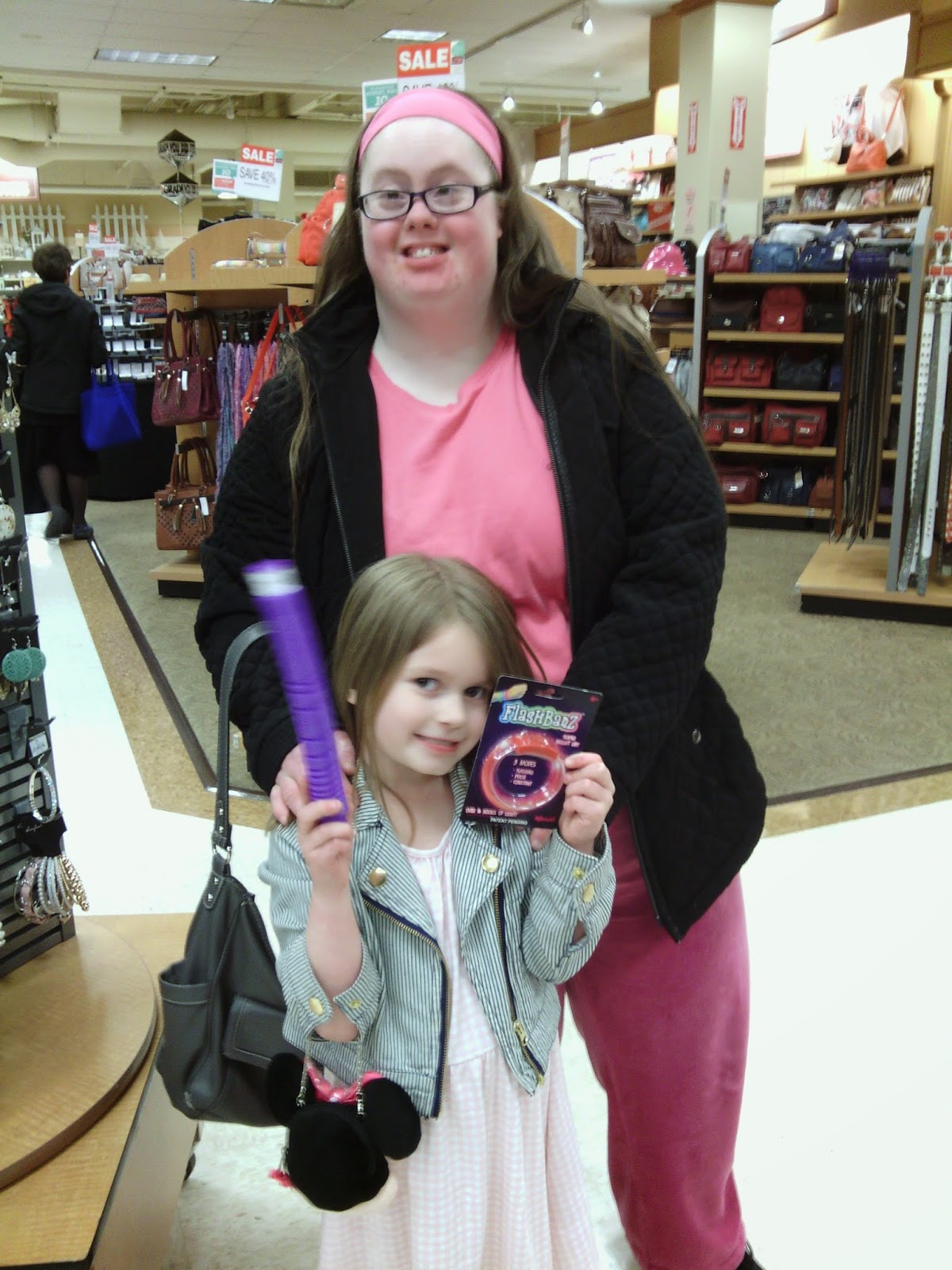 The biggest thing we did in the last week, in my opinion anyway, was move Beth's couch. She's had a small couch in her room that she didn't want anymore and I wanted to move it to our classroom. It was a matter of getting it around the corner, up the stairs, through the living room, out the door and into the van. THEN we had to get it into the church, down the elevator... you can see why we kept putting it off. :) But it's finally done. And it looks amazing in the room!! I forgot to take a picture but I'll get one next week. The most surprising thing about it all was when we tilted the couch up to get it up the stairs, SO MUCH STUFF rattled around and slid from one end to the other, INSIDE the couch!! Chuck and I got it upstairs and began pulling stuff out. He would push down hard on the seat and I'd squeeze my arm in. We pulled out a very large book, her MP3 that she 'lost' a few months ago, plenty of headbands, dog nail clippers, a stapler! Yep, a stapler! How on earth?! That book?!? Seriously?! Anyway, it took us a few minutes but we finally got everything out and called Beth up to put everything away. You should have seen her face! Every few seconds, "I was looking for this!" :) 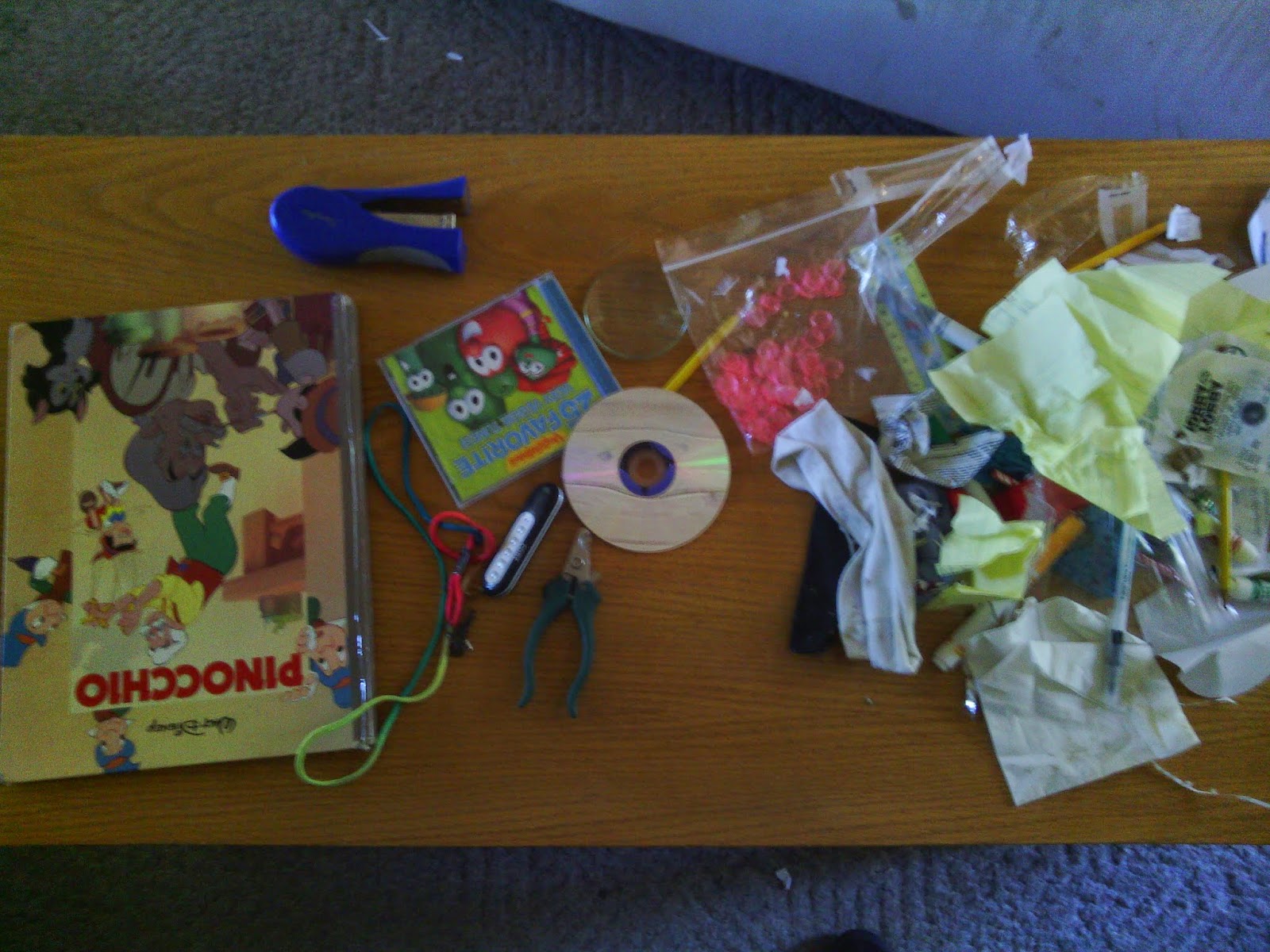