Look what came in the mail yesterday - 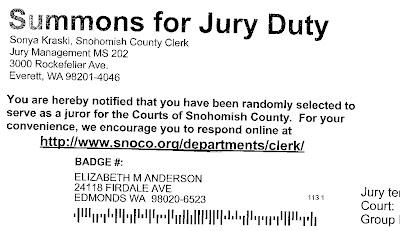 Sorry it's crooked. I had to fold it and refold it to make sure I hid some of the personal information.
Chuck and I have been talking about what to do. I know Beth doesn't have the mental capabilities to handle being a juror. We might take her to the courthouse and let her decline in person. We're not sure.
After reading the entire letter, I guess our only options are to respond electronically or by filling out the letter and mailing it back. They give reasons for not serving - health, business, financial hardship. Then at the very end they list: other. I don't know if they'll believe us when we tell them she has Down Syndrome or if they'll want to see her and some ID. It'll be interesting.
Posted by Cindy at 10:02 AM 6 comments:

Email ThisBlogThis!Share to TwitterShare to FacebookShare to Pinterest
Labels: Adult with Down Syndrome, Jury Duty

What Should We Call Him?

I looked out the window to the layer of snow in the yard. The wind had created a blanket of pine needles and small branches that now covered the glistening white. I have been wanting to build a snowman but have either been sick with a cold.... or at work.

Now was my chance. I debated about the adventure, knowing it was cold and wet outside and I was warm and comfortable inside. But I really wanted a snowman. It didn't have to be big I told myself. Even a small one would suffice.

I slipped on the boots and zipped up my jacket. The rain had melted a few inches of snow and left a thin layer of ice. I smiled as it crunched beneath my boots. It was great snowball snow, packing easily and staying solid.

I began rolling the snow. Found just the right spot outside the livingroom window and began building. The second section went on easily and I carefully rounded his belly with my glove. Next came the head. I looked for some branches for his arms.

Before I knew it my little guy was finished. He may be small but it was so much fun!! 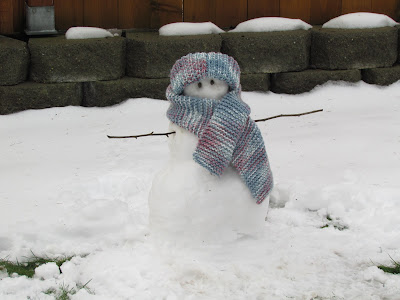 (I have to thank Kristin from Tales of Two Thirty Somethings (also called The Princess and the Tornado) and Polly from She is our Angel for helping me with my Blogging issues! I couldn't have done it without you both!)
Posted by Cindy at 4:25 PM 6 comments:

And now my header photo is gone. Sigh.

I haven't been happy with Blogger lately!! I haven't been on here much because I just haven't wanted to deal with it. I really haven't. (Have I said 'haven't' enough yet?)

So much has been happening around here - we've had a major snow storm here in Seattle. Right now we have more than 7 inches of snow in our backyard. It might not seem like a lot to some but most years we only see 1 or 2 inches. Some years we don't get any snow. So for us to have 7 inches is a major event. Parts of Seattle have a foot or more. County offices are closed, busses aren't running, many businesses are shut down. People are snowed in! In Seattle!

I caught some bug on Tuesday. Spent the last 2 days on the couch. Haven't been able to play in the snow although tonight we made snow ice cream.

We had Beth's ISP meeting last week. The state comes out once a year to make sure Beth is being taken care of physically, vocationally, and to confirm the amount she gets paid from the state. Her case worker really encouraged me to confront Beth's job coach about her unemployment. The state pays the vocational service for 8-12 hours a month. At this meeting we learned they are only spending 3 hours a month helping her find a job! She's been unemployed for 8 months! Why is it taking so long? I know jobs can be hard to find but it's not impossible. Beth had a working interview at our local grocery store a few months ago but her job coach told me they weren't hiring. However, about a month ago (did I already tell you this?) we saw a friend of Beth's working there. He also has down syndrome and told us that he used to work at a different store and had recently been transferred to this store. Really?? So did the job coach lie to me? Did the store lie to her? Her case worker was shocked. She basically told me that they're not doing a good job. She wants me to pester the vocational service. Email, call, keep on Beth's job coach so they actually use the 8-12 hours they're being paid. It was good to know she was on our side.

It was a few days after this meeting that the snow hit. We've been dealing with it for 6 days now. I just heard the forecaster say we could get more snow tonight! Wow. This is so rare for Seattle. When we do get snow it's usually gone within a day or two. So many people are without power. A lot of ice, downed trees. Our family is doing well, but many are not. The snow has been fun but I think we're all ready to get back to good 'ol rain!!
Posted by Cindy at 9:49 PM 4 comments:

I wanted to update my blog today, adding a different template and new, bright pictures. Unfortunately I was unable to do both.

How do they do it?? ...Where Laughter Lives, The Riggs Family Blog; Life with My Special K's or A Perfect Lily. How did they get their header pictures to look like that? Where do they find the fonts, colors and fun picture layouts?

Blogger told me that my Picassa folder is full and I can no longer upload pictures. Unless of course I purchase more space. Of course. I even removed hundreds of pictures from Picassa, to no avail.

I've been wanting to clean up every area of my life. Organize, get rid of stuff. Today I cleaned out a small bookcase in the office area. Got rid of a lot of old papers and books. Maybe it's the time of year. Maybe it's my age.

Here is a picture of Beth's new pant suit. Outfit. Not sure exactly what it's called but she loves it! She also has one in teal. I wish we had found these long ago! They are on clearance at Penney's and the few times we've gone back, they haven't have any more in her size. :(

At least she got two of them! Diana took this picture at church. She was just standing there, arms at her side and Diana asked her, "Why don't you pose?" 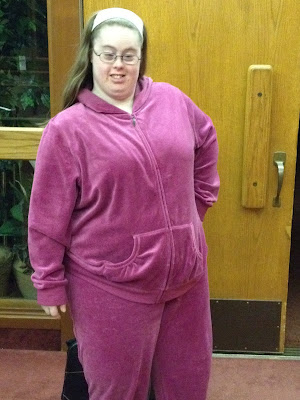 Beth has choir rehearsal every Sunday afternoon and today while I was taking her I asked her if she had her cell phone. She always calls us when it's over to come pick her up. She told me she did have it. Then she said, "Calm down crazy lady."

The way she said it was a little bossy. Beth rarely talks back or is disrespectful and I was shocked!! I looked over at her and she did have a smile on her face. Um, okaaaaay. I wasn't sure if this was true disrespect but I made sure she knew not to say it again.

Sometimes it's hard with Beth because she doesn't always get jokes or teasing. She'll ask us something like, "Can I have the last yogurt?" and Chuck will teasingly tell her, "Nooooo! Noooo, it's miiiine!" And she'll hang her head and put it back. We have to remind her that Dad's just teasing and she really can have it. So it's also hard to tell when she's teasing.

I think this was a case of teasing. I think. Sometimes I really can be crazy.
Posted by Cindy at 6:36 PM 3 comments:

Email ThisBlogThis!Share to TwitterShare to FacebookShare to Pinterest
Labels: Adult with Down Syndrome, Disrespect, Jokes, Teasing

It's been a pretty slow week around here. I went back to work after many days off from the holidays. (I work at a church and we were closed quite a bit.)

We were at Penney's the other day and found some velvet-type pant suits that Beth fell in love with. She has a hard time wearing regular pants because her bum is so big and the tops pop out in the back. She can feel it and so just doesn't wear them. Lot's of pants in her closet but she wears the skirts that fit her well.

Then we found these outfits. She tried them on and hasn't taken them off since. Unfortunately there were only two sets - they're separates - in her size or she would have bought one in every color!

Other than that, not too much has been going on. Hope your new year is going well so far!
Posted by Cindy at 3:55 PM 2 comments:

Email ThisBlogThis!Share to TwitterShare to FacebookShare to Pinterest
Labels: Adult with Down Syndrome, Pant Suit, Penneys