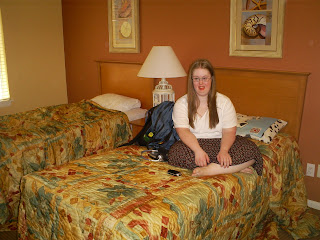 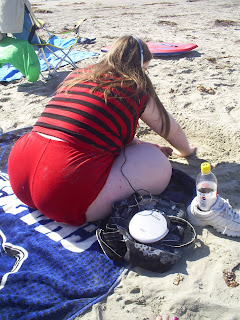 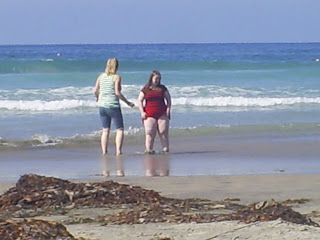 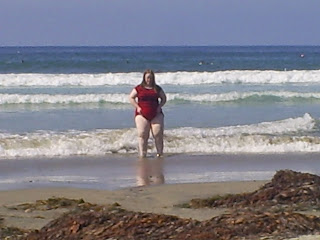 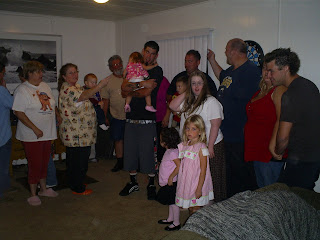 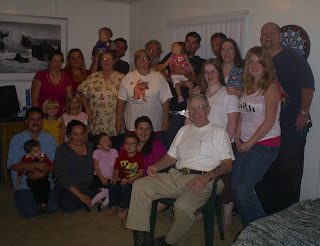 We are on vacation in San Diego and having a great time! These are pictures of Beth in her room in our condo; at the beach at La Jolla, it was very warm and so beautiful!
The first night here, we had a family reunion! Everyone was there except Beth's sister Sharaya and her husband Ryan. Sharaya is going to have a baby in a few weeks and was unable to come down with us. Maybe we'll photoshop them in! :)
Right now Beth is at Disneyland with Diana! I'm sure they're having a lot of fun and will bring back lots of pictures!
Posted by Cindy at 10:58 AM 1 comment:

This has been a month full of parties! Sharaya and Beth both had birthdays and on Sunday we gave Sharaya a baby shower! Lots of friends, presents and a beautiful cake from Miss Patti! (We love her Patti cakes!)

Beth helped us set up for the shower, moving tables, arranging chairs and just helping where needed. She worked so hard she actually fell asleep in the middle of all the excitement! Pictures to come later. :)

Tomorrow we leave for vacation! We are driving to San Diego to visit family and friends and for my high school reunion. We haven't been on a road trip in more than two years and are definitely looking forward to this! Our kids have grown up taking road trips and I believe this will be number 35 for us.

I always make a packing list with 6 columns: one for the actual list, then 5 more with each of our names at the top. Beth took a giant suitcase into her room along with the list and began filling it up! When she put in some shirts, she'd put a check mark in the column with her name at the top. Then her pants, check. Shoes, check. She loves this! I let her do her own packing, but always double check it before we leave.

And speaking of packing, I need to go fill my suitcase! Clothes, check. Vitamins, check. Camera, check.
Posted by Cindy at 10:48 PM 1 comment: 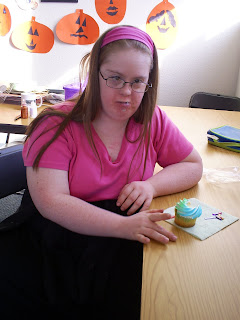 Beth is 25! Twenty Five years is a long time. Think about where you were and what you were doing 25 years ago. Go ahead, think about it. I'll wait. :)
On Wednesday, I took some cupcakes to her friends at All Aboard.
This is Beth happily eating her cupcake! 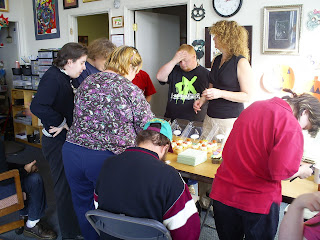 This is some of her friends at All Aboard getting their cupcakes. Everybody loved them!
Beth was a star! 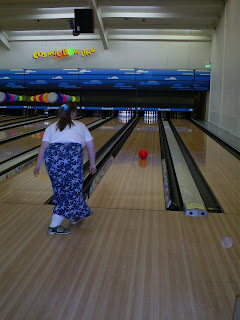 We asked her what she wanted to do on her actual birthday, October 10 and of course she said bowling! So the whole family drove to Spin Alley and bowled two games. We cheated a little by using bumpers, but you've never seen Beth's sad face when she gets a gutter ball! :(

We didn't want that to happen..... on her birthday! 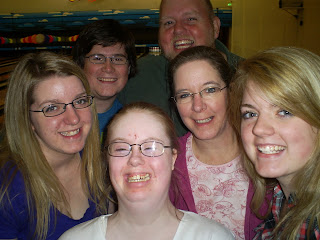 See, I told you the whole family went! Didn't Diana do a great job getting us all in the photo?! 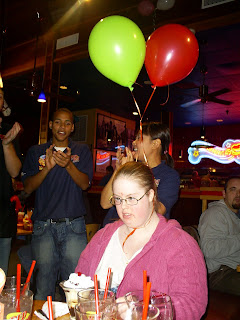 The next stop was Red Robin. I don't think she liked having the balloons around her neck. 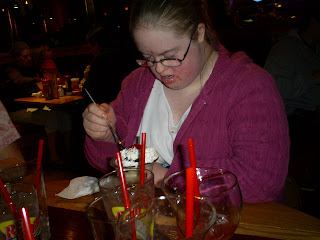 She finally got to eat her ice cream and felt better after that! 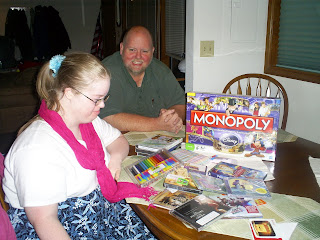 After Red Robin, we came home and she opened all her presents!! She got movies and music and games and even a beautiful pink scarf from Sharaya and Ryan! What a fun day! 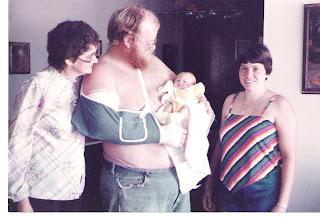 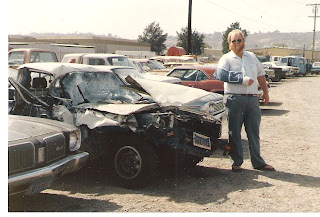 We called each of our family members and asked them to come to the hospital. We were holding Beth as we explained the limits and uncertainty of Down Syndrome. Beth was passed from one set of waiting arms to the next. They cried, they held her close and we knew, they were going to love her too.

The next couple of days brought an endless stream of visitors. Friends, extended family, doctors, specialists, therapists. During the few moments we had alone with Beth, we tried to familiarize ourselves with all the things that come with having a new baby. Never mind the Down Syndrome, how do you clean the belly button?! What about bath time, do I even dare touch the soft spot?! It was for this reason we decided to take the 'first time parents' class the hospital was offering.

The day for the class arrived and the hall was soon filled with slow moving moms. We all settled into the rocking chairs that had been placed in a circle around the room. As soon as the nurse began, she was interrupted. Another nurse looked right at me, "Cindy, your husband has been in an auto accident and is downstairs in emergency." I stood up, completely in shock and followed the nurse out of the room. Chuck is a large man and I knew he wouldn't be brought to the ER if it wasn't serious. I was unable to see him due to the sterile conditions downstairs and had to be content to just talk with him on the phone. I felt a little better after hearing his voice, but still called my mom and asked her to come. It took 5 hours for them to clean him up enough to release him. He came upstairs and told us his story.

He was leaving work to come to the hospital and slammed into the back of a flat bed pick up truck. He never saw the truck and so was going the full speed of 45 miles per hour. As he tells it, "I heard crunching so I closed my eyes and slammed on the brakes. When everything was quiet, I opened my eyes and the corner of the flat bed was 6 inches from my face."

The Lord had been with him in that truck. We later learned that an Elder in our church had a dream that Chuck, me and our baby were all killed in an auto accident. He got together with the other Elders and they prayed for Gods protection around all of us. Chuck came away from that accident with only scratches and bruises. Not even one broken bone!!

So with no car, Chuck out of work for a while and me recovering from emergency surgery, we began the life of a family with a special needs child. Social workers stopped by our house; physical therapists came to work with Beth; we joined support groups. Looking back now, I don't know how on earth we survived. But I do know that God has met our needs time and time again. He has walked this path with us, lighting the way when we didn't know where to turn. He has used our family and friends to give us hope when we thought hope was gone.

Beth turns 25 on Saturday, Oct 10 and we can't imagine our lives without her! She is the puzzle piece that completes our family! It has been a journey we didn't expect, but one we wouldn't trade for anything in the world! 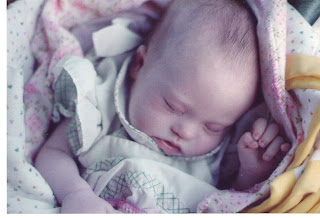 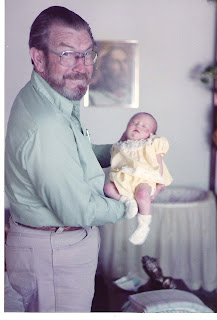 "It's a girl! You've got a girl!" The doctors words still sometimes ring in the back of my head. It's been many years since that first day of my daughters life and yet it seems just like yesterday. The Tigers had beaten the Padres in the first game of the World Series. Living in San Diego we were devoted Padre fans and our TV was tuned in to game 2 when I felt my water break. I quickly checked my already packed suitcase and with great anticipation, we headed to the hospital.

Doctor Maloney was a fantastic doctor, a grandfatherly type with a great bedside manner. He made you feel like a member of his family, rather than a patient. He told us that my water had actually ruptured the day before and our baby was at risk. He wanted to perform an emergency c-section.

After all these years, I can still remember the rhythm of those ceiling lights as they wheeled me down the hall and into the operating room. I was so relieved to see Chuck walk into that room, but noticed the small green hat barely covered his thinning blonde hair! We listened to the doctors talk about their vacations and their families, then a baby cried. "It's a girl!" Our baby girl!

Elizabeth Meigan! We had picked out the name months before. They wrapped her in a blanket and handed her to Chuck. He held her out for me to see; she was the most beautiful child ever born! As the anesthetic took over my senses and I drifted off to sleep, Chuck took Beth to the nursery to be weighed and measured. The pediatrician on call looked at Chuck, "Did you know your baby has Down Syndrome?"

Chuck went out to tell the family that Beth and I were both doing well, but didn't mention anything about this stunning news. The nurses put Beth in the nursery window and our family gathered around to get a good look. They commented about her perfect, little round head, they hugged each other; but no one noticed what the doctors had discovered just moments before.

Chuck drove home that night, keeping this shattering news to himself. He prayed and asked the Lord if there was anything he could have done to prevent this. John 9:1-3 came to his mind, when the disciples ask Jesus who is to blame for the man born blind. Jesus tells them that no one is to blame, but that this happened so the work of God would be revealed in his life. Chuck crawled into bed and closed his eyes, but unlike most nights, it took him a long time to fall asleep.

As Chuck was hearing those mind-numbing words the night before, I was being wheeled into recovery, then to my room where I slept hard all night. The next morning my pediatrician came in and sat on the edge of the bed. He told me that Beth was showing signs of Down Syndrome. He talked about chromosome tests, specialists, therapy... his words drifted off into the air. I remember something about chromosomes from Biology class. Why didn't I notice last night? Does Chuck know?? As the doctors words filled my mind again, I found myself crying uncontrollably. My phone call woke Chuck. He could tell by my tears that I knew. He came to the hospital and pulled a chair up beside the bed. He took my hands and through his tears he asked, "We can still love her, can't we?"