A Reason to Celebrate

This weekend was pretty special for us because it was the 1 year anniversary of Beth working at Little Caesars! It's the longest she's ever held a job.

Some jobs were too difficult for her to do, like cleaning the dining area at a McDonalds. I think she could have done it, but this was quite a few years ago and the only reason she wanted to work there was because she got to have french fries while on break. So that job didn't last long. :)

When she worked for Auntie Annes she had to stand in one place for over an hour and ask people if they wanted samples. She struggled to stand that long - without being able to move very much - and she was so shy it was hard for her to speak loud enough for people to hear her.

She did laundry at a group home for a while and did really well, but the manager began treating her unfairly, then wouldn't show up for meetings that she scheduled with me and the job coach. The last straw came when she accused Beth of taking a mop out of a bucket that was in a room Beth didn't even know existed. (Beth would go into the home, go to the laundry room and do laundry for a few hours. Why did the manager think she would go into a different room and take a mop?) That's when the job coach and I agreed to submit Beth's resignation.

But Little Caesars has been A.M.A.Z.I.N.G!! They love Beth, they stick up for her, they fight for her, they love having her there. Boy that does my heart good.

Beth decided she wanted to make some cooking to take to everyone at work. She said everyone loved them! I asked her job coach if her coworkers new it was her 1 year anniversary and she said that when Beth got there, 'C' announced to the crew and they all cheered and clapped! I just know Beth was beaming. Then, at the last minute, we decided to drive up and surprise her! It's a 30 minute drive so we went over and picked up Sharaya and Allie and headed north. We walked in and one of the workers came over and asked if he could help up. When I told him we were Beth's family, he went to the back to get her. We could see her manager telling her it was okay, she could come say Hi and when she came out, there was a huge smile on her face and she yelled, "Bobbin!!" (That's her nickname for Sharaya, who was taking her picture.) :) Allie ran up and gave her a hug, it was awesome! 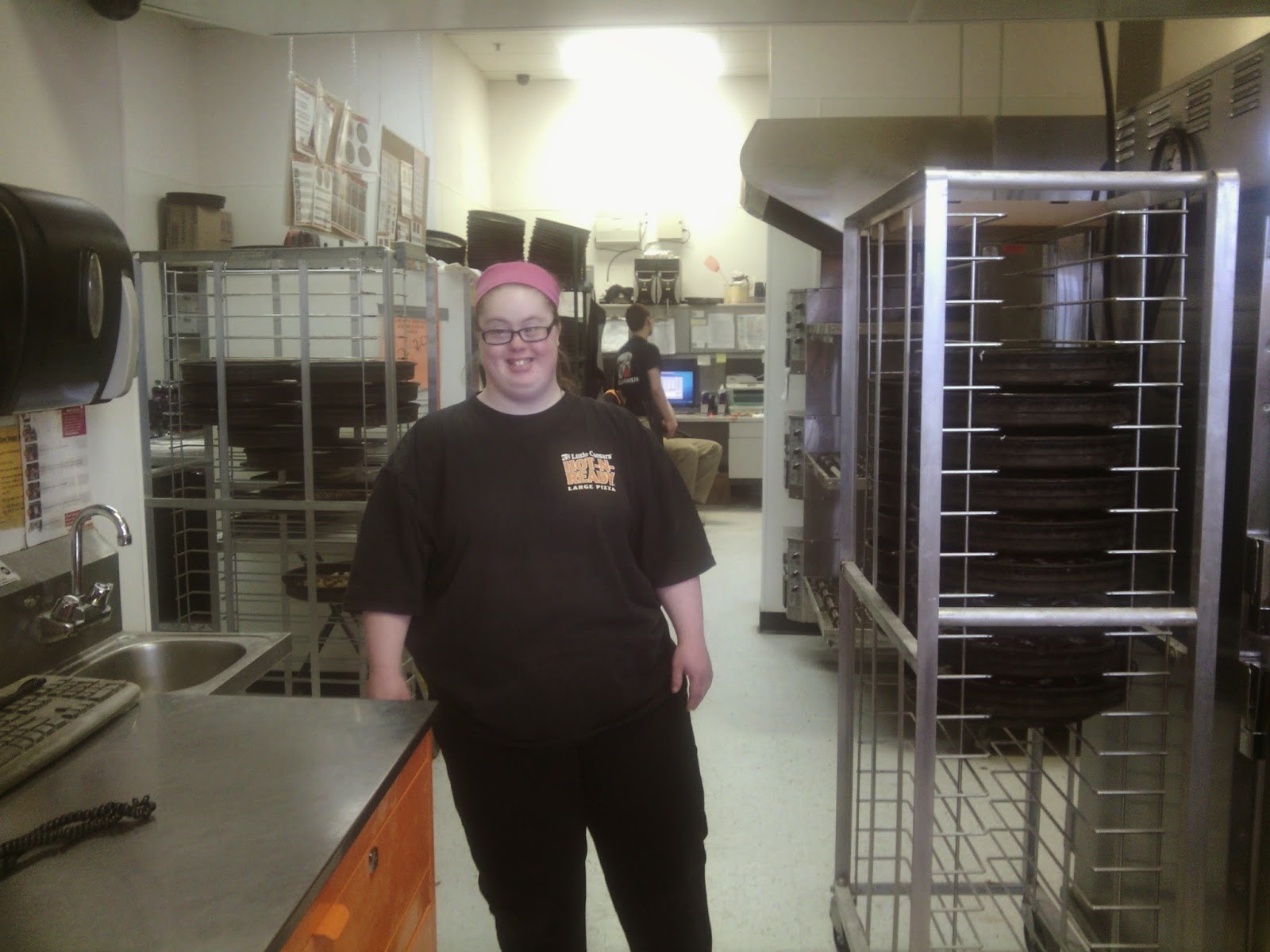 I'm SO thankful she has found a job that she likes and gets to work with people who like her and treat her well. One thing we noticed while we were there; the place was packed. So many customers, it was always full. And the crew was movin'! They were hustling and yelling orders and packing... there were probably 8 or 9 of them. And they were all guys. Beth was the only girl.
No WONDER she likes working there so much! :)
Posted by Cindy at 8:48 PM

Awesome! Congrats, Beth! What an accomplishment. And who wouldn't want to be the only gal amongst the dudes!

Way to go Beth. Having a job you enjoy is so important!!

This just warms my heart. . . that she loves her job SO much and that her coworkers love her. Of course, if I was working with nothing but boys . . . . :-P Congratulations, Beth!!!!!

So cool! Congratulations to Beth :)