Has It Only Been A Week??

What a crazy week.

A friend and co-worker is on vacation so I'm filling in for her, doing her job as well as my own job. Working a lot more hours than usual. It's been busy, that's for sure but the biggest issue is my back. My co-workers chair is very different from mine and I've been using both of them this week. I think that's why I've been having muscle spasms in my lower back. Over the years I've learned to be so careful about what shoes I wear, how I move, to almost eliminate all back pain and this chair thing is the only thing I can think of that would be causing these spasms.  I'm glad she'll be gone only a couple more days!

Diana is dog sitting for a friend. We now have a boxer living at our house. She trimmed his nails this morning and cut one too close so he's been bleeding all over. She's tried a four/water paste on the nail and that's helped a lot. She also put one of her blankets on the couch and we're trying to keep him there. It's not working well though. As soon as he hops down, the nail starts bleeding again. Diana's shopping right now so he wants to be with me in our office area. I finally got the bleeding stopped again after he went outside to go potty. Ugh, dogs. I'm done with having pets. For 25 years we've had dogs, cats, guinea pigs, fish... I'm done with pets for a while. It may be selfish but I want a break from all the work that comes with having pets.

I was out mowing the lawn last weekend and hit a rock. The rock hit the back of my van and shattered the window. I just stood there in shock as I listened to the crackling of the window as it cracked into a million tiny pieces. 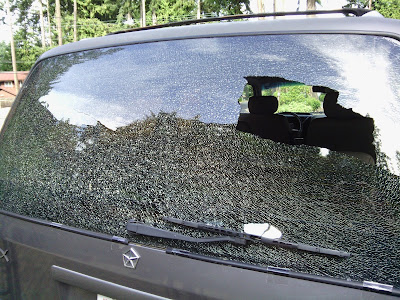 I called one place and gave them all the info: make and model, window tinting, wiper... they gave me a quote. I called a few days later to make the appointment and was told they gave me the wrong quote. It was actually going to be more than the original quote. Fine, it's still cheaper than the other places I called. We set up the appointment. The night before they were to come out, they call and say they don't have my particular glass in stock and they have to order it. It will take longer than expected and oh yea, the price will go up. No thank you. I now have an appointment for next weekend with a different company. In the meantime I'm driving around with white plastic duct taped to my car.

We got a call from Beth's doctor telling us the biopsy results are positive for Scarring Alopecia. Her doctor is sending off tissue samples for a second opinion and I should hear from them in a few days. The Nurses Assistant for the 'second opinion doctor' calls and tells me they don't have any appointments available until 2016. Oh. "But I thought our doctor was just sending tissue samples for your opinion?" The NA was just as confused as I was. I called our doctor back (and you know how it goes, they're with a patient or have gone home for the day and will be in touch... it's never quick and easy!) So a couple days later our NA calls and says, "Yes, take the 2016 appointment." But, but I thought you were just getting an opinion on the sample. "No, doctor T does want Beth seen by the 'second opinion doctor'". And while we wait, the alopecia continues to spread and Beth continues to lose her hair. Arrgh!

Oh NO about the car - grrr and I hope you find relief for your back.
On Alopecia - bummer. How's Beth feeling about this? It's so strange to me that an immune difficencey manifests this way. But the human body...one complex piece of work.

omg, crazy week for sure. It's absolutely ridiculous that their is no appt until 2016. C'mon now. The window thing is usually covered by insurance isn't it? At least in Ct it is.