I think this is the longest I've gone without an update. Lets see, since I wrote last...

Beth pulled a muscle in her back and couldn't walk upright for a full day. I put some Icy Hot on her back and when she woke up on day 2 she was much better. It was interesting to watch her go through that though. She's never pulled a muscle before and now she's always talking about "Bean careful when I bowl." "I took my shower and I was careful my back." I think middle age might be showing it's ugly head.

I've noticed Beth has become high maintenance lately. We're still dealing with the alopecia and I put cream on the bald spot on her head a few times a week, plus I'm brushing her hair everyday now. For many years, she put it in a tight ponytail (she'd spend her day pulling it tighter and tighter) but the doctor thinks that might be the cause of the alopecia. So to cover the bald spot I pull her bangs back into a small 'soft' ponytail and let the rest of her hair just hang down. Before I go anywhere, I have to make sure I've taken the time to brush her hair. That's something she's done for many years.

Beth and her boyfriend broke up. But then got back together again. But maybe just as friends, not really sure. :)  I thought I heard Beth crying downstairs and went down to see. She was laying on her bed sobbing. I sat down next to her and asked her what was wrong. She lifted her head long enough to say, "N broke up with me!" Then continued sobbing. It broke my heart to see her like that! His mom and I had made plans to get the two of them together so I called her and asked if she thought it was still a good idea. She called N over and he told her that Beth is 2 years older, so he broke up. His mom laughed! "Oh N, that's no reason to break up! Do you still want to meet with her?" He said yes so their 'date' is still on. (It's planned for the first week in December. I promise to let you know how it goes!) A few days ago I got a text from Beth, "I'm back with N again."

All is right with the world. :) 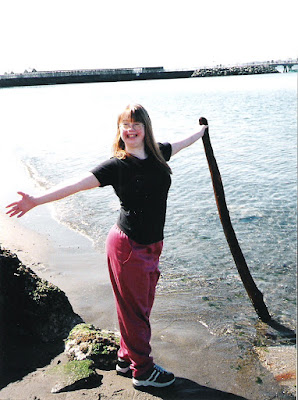