I called DART recently to get Beth's ride times. When I gave the guy her name he said, "Oh! Our pizza girl!"

I asked him what he meant and he said that her letter and picture are hanging on the wall in their dispatch office and they refer to her as their pizza girl.

(Beth is home by herself a couple days a week so I give her chores or other things to do to keep herself busy and out of trouble. One thing she likes to do is write letters. So I've occasionally had her write generic letters - there's probably a dozen drivers and you never know who you're going to get - to her DART drivers telling them thank you for driving her to work. One time we included a picture.)

Our pizza girl. That made me feel so good!

Then last night her driver came to the door and asked if he could talk to Chuck. He told him that Beth was crying when she got on the bus at work. He had tried to talk to her but she didn't respond. He asked Chuck if they were treating her well at work, he wondered if maybe they were being mean to her. Chuck told him that they love her there and that he doubted that was the problem but he'd talk to her. The driver was really concerned. Chuck thanked him profusely and came in to talk to Beth.

I guess Beth was expecting to get her paycheck last night but she gets paid every other week and had the weeks mixed up. We asked her if she had asked someone at work and she said yes, but they told her they couldn't find it. I bet they weren't sure what she was talking about and she was too upset to come up with the words to explain herself. Once Chuck told her she'd be getting paid next week, she was fine.

But it has made me feel so good about how Beth is being perceived. She's puttin' herself out there and people are responding to her in a positive way. Makes my heart happy. :) 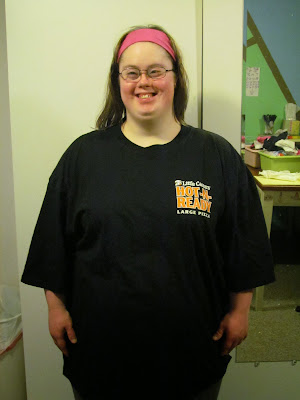 Email ThisBlogThis!Share to TwitterShare to FacebookShare to Pinterest
Labels: Adult with Down Syndrome, Job, Perceptions

Lovely to know there are people looking out for her. She's making herself known!

Love this. Glad she has found her niche!

I love how Beth is not "the pizza girl" but rather "OUR pizza girl". A sense of community and that they are looking out for her.

Good point Anna above made! & I loved how he was concerned about her!! A lot of people might just ignore it but he actually talked to you guys. How fantastic!

Ditto what Anna said! It is nice to know that there are good people out there who do care and will check up on our kids.

What a sweetie. I love that you give her some jobs to do when you are gone to keep her occupied. You are a great Mom. I am also SO thankful that the bus driver cared about her feelings. That makes me so happy.