Today was the Puget Sound Buddy walk! I think it's been held here for 16 years and this was our first time attending. We didn't know what to expect, certainly didn't expect all those people! It was fun! So many yellow shirts. So many more almond eyes.

I didn't see many adults with Down Syndrome. We didn't have a team or collect money this year. I wonder if it would be more fun if we did? I mean, we did have fun, but it was just the 4 of us. Chuck and Diana met two families who actually lived here in Edmonds; part of the time Beth and I sat by the stage and listened to the speakers.

We were in downtown Seattle, right under the Space Needle. This picture is about 20 years old, but it will give you an idea of where we walked. If you follow down the Space Needle (don't look to the right of the base, but below the base) there is a carousel, roller coaster and a few other rides. Well those aren't there anymore and that's where we all met. We then walked out toward the fountain (to the right of the stadium.) We walked around the fountain, following the tree line, then around the actual fountain and back to the start. 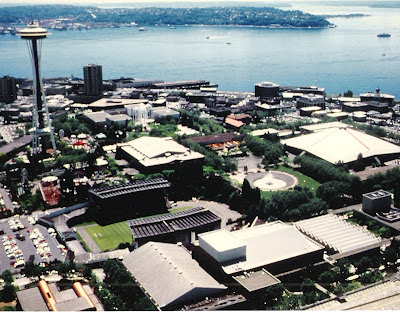 Everyone gathering to begin walking.
There were so many people! 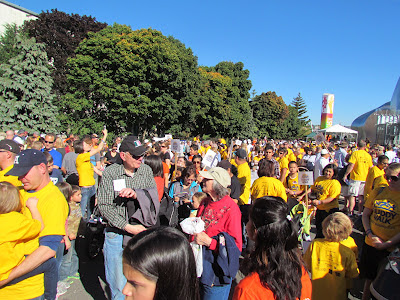 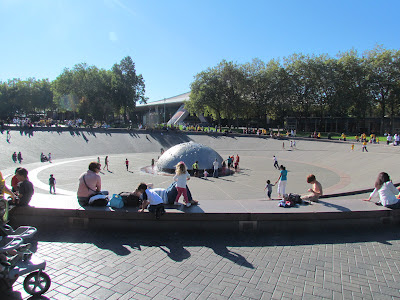 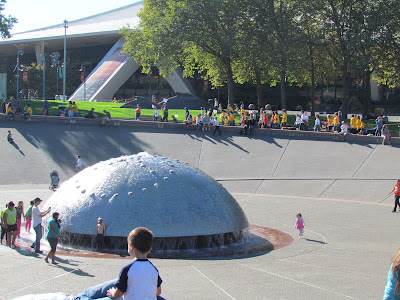 One of the speakers was Eliza. She went through all the hoops to get into college, then was told she couldn't attend. They told her college wasn't right for her. So her family moved to Washington State and now she's enrolled in college! Her basic message was "Believe in yourself! Don't give up on your dreams!" 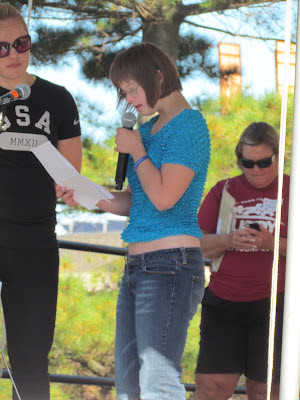 After her speech, we got up to go sit back with Chuck and Diana. All of a sudden, they started playing The Climb by Miley Cyrus. You bet Beth made a u-turn, sat back down and began to sing and rock out to the music!! 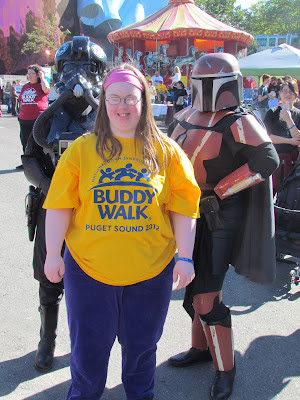 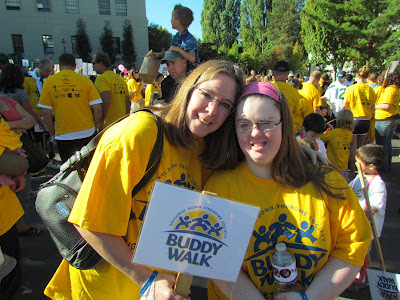 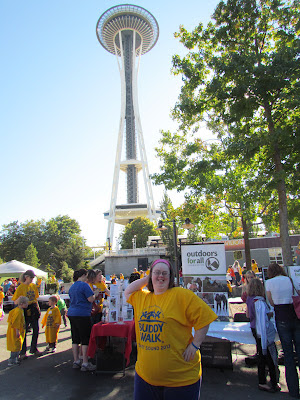 Too fun! Music just for Beth, and you both look smashing in your yellow t-shirts. It is amazing how big our community is, how many people count themselves in our community.

We don't raise money or have a team for Buddy Walks either! But yes, still fun!

Glad you got to go! We have not been to one yet either. Hope to in the near future.

So glad you had a good time! We love our walks!

That's awesome you guys went and had such a great time :)

We did 2 Buddy Walks this year! The Cleveland one was so big that you didn't even notice that it was a walk for Down syndrome. At the Erie Walk there were a few adults with Ds but not many. It is so great that you guys went this year!