We're Back and There's So Much to Share With You

Our flight to Pennsylvania was good. We helped Diana with some packing and got to spend some time with Peter's parents. We went to their house for dinner and played Mexican Train. The more we're around them the more we love them. Such good people, so warm and inviting.

We all drove up from Philadelphia to Boston. Stayed at the same hotel; the girls and the guys went to breakfast separately. Another chance to get to know one another.

Back to the hotel to get ready for the wedding and by the time we left the hotel to walk to the park for the ceremony, it was raining! Thankfully the hotel handed out umbrellas as we left.

Boston Common was just one block from the hotel but the area where they got married was at the other end of the park. It rained the whole way. But thankfully, by the time Diana, Chuck and Sharaya got out of the cab, it had stopped. Chuck walked her to where we were waiting and after a few minutes the sun came out.

The girls breakfast before the ceremony 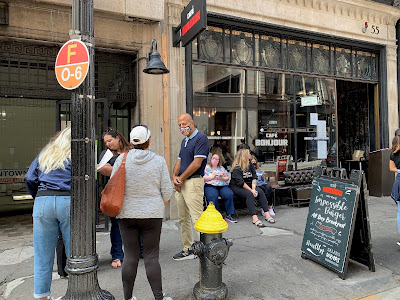 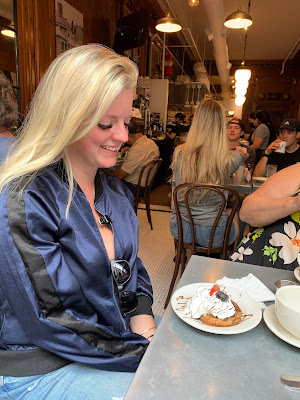 In Boston Common, waiting for Chuck and Diana to arrive. Since it was a small ceremony, we were all just taking pictures with our phones. 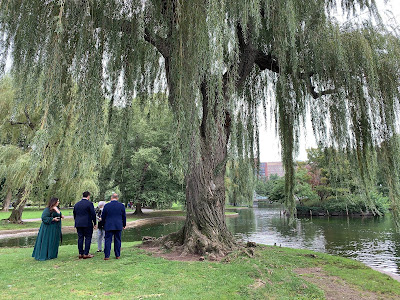 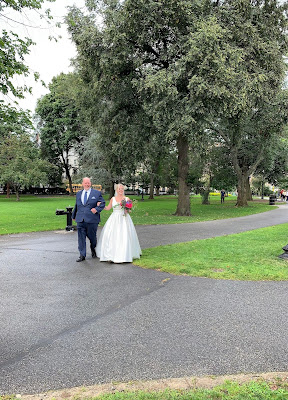 Peter's mom took this one! 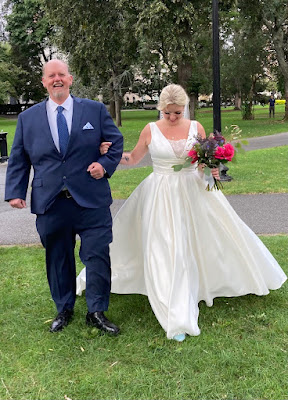 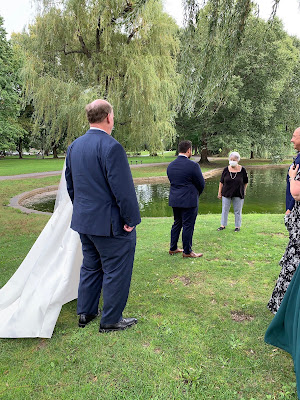 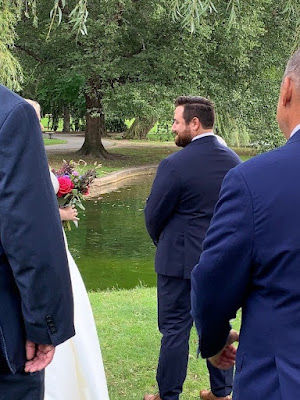 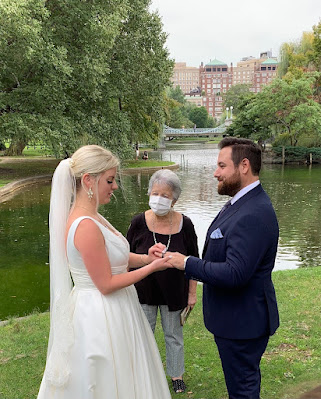 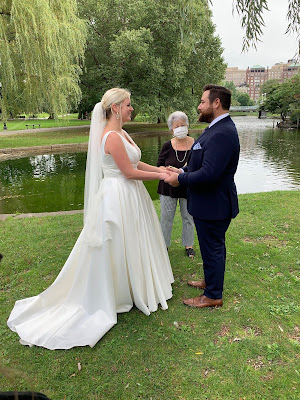 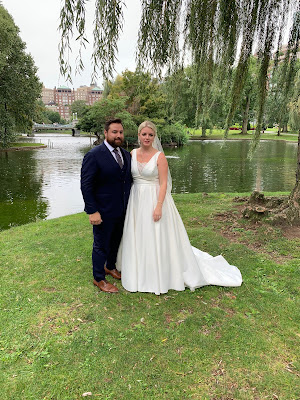 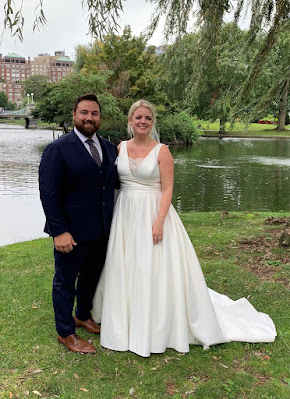 Beth was crying in this picture. When we asked her what was wrong she said, I'm losing my sister!!" We told her she was actually gaining a brother! That made her feel better and now she has two nicknames for him! 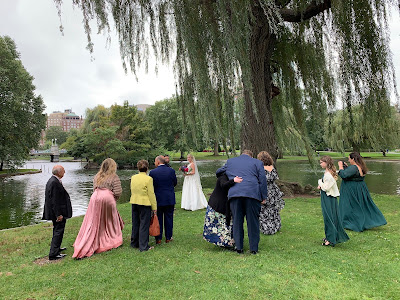 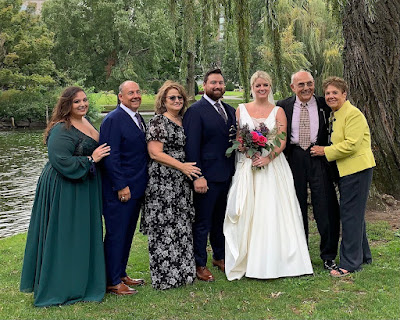 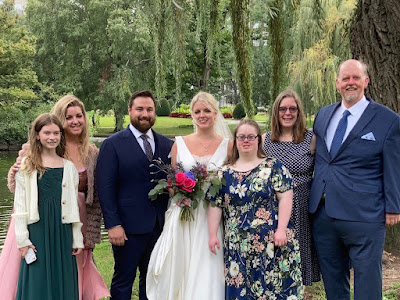 We walked back through the park and went to Tresca's for dinner. It's an Italian restaurant, complete with canoli's for dessert! Everything was delicious. The whole day was so great, I can't express enough how much we adore Peter's family!

And this was just the beginning of a 4 day celebration! 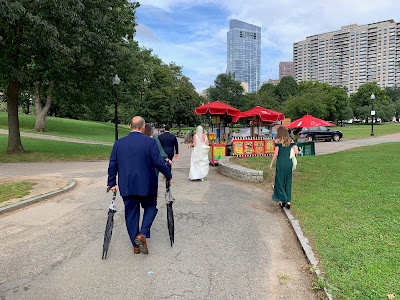 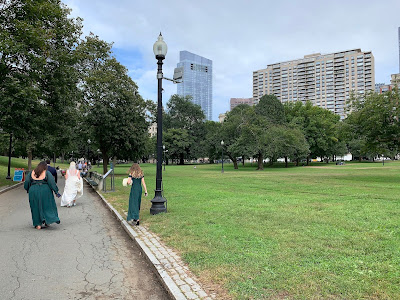 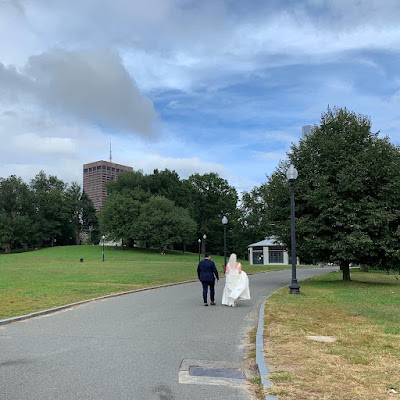 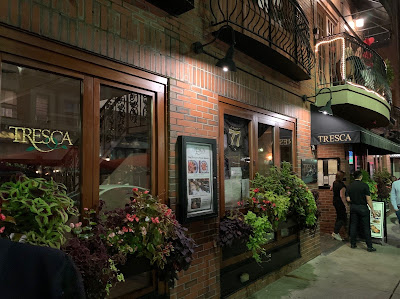 Oh, what a beautiful bride! This post makes me smile -- a handsome couple, a wonderful wedding venue and a lovely day for it all. I love that Beth was calmed when she learned she would be gaining a brother. Boston is such a wonderful city -- Ilook forward to more of your adventures! But I'm sure the wedding will be the most memorable part of it all.

Congratulations! What a beautiful day! Beautiful bride! Beautiful families! So very happy for you all. Hugs!

Perfect timing for the sun to come out! The bride is BEAUTIFUL and that gown is gorgeous! Wonderful photos of a lovely wedding. So well done in these trying times! My baby sister cried when I got married too. Emotions come out in all different ways. Thank for sharing your very fun experiences with us!! xo

What a lovely wedding, congratulations!!!

Perfect ceremony. Glad the weather cooperated after the early rain. Love the photos of the families and the lovely couple under the weeping willow. Your daughter's dress is so elegant. Wishing them a lifetime of happiness together.

Sweet Beth!! Hope she is able to embrace having a big brother now.

Ahhh - Beth - that's so sweet - scared of losing her sister.
What a gorgeous bride!!!
I love the idea of doing a smaller ceremony together & then celebrating later with more.

What a lovely setting for a beautiful wedding! So very pretty and everyone looks so happy. Sorry that Beth was sad, but glad she understood that she was gaining a brother and not losing her sister. That can be hard to comprehend sometimes. Can't wait to see the rest of the "story".

It all sounds perfect. What a beautiful couple. She looks stunning! The photos are lovely and I'm so glad you had a nice time. Can't wait to here more about your trip.