The ceremony in Boston was on Wednesday, September 22. On Thursday, Chuck, Beth, Sharaya, Ally and I drove down to New York. We dropped the three of them off at the ferry to the Statue of Liberty and Chuck and I headed on to the hotel. 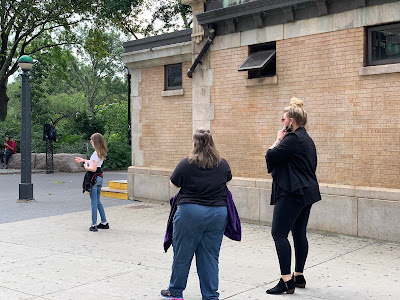 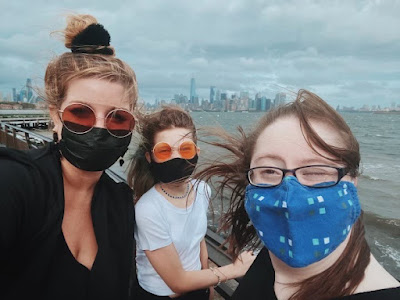 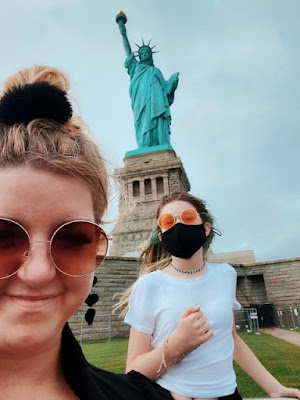 After a little while Beth sent me the photo below and then texted, "What hotel are you and Dad are in now mothera" I could tell she was a little nervous. She was having fun with her sister and niece and she knew she was safe but she was in an unfamiliar place and didn't know where we were... I told her the name of the hotel and then, "You, Sharaya and Ally are on your way here now. We'll see you in a few minutes!" Her response, "Okay!" 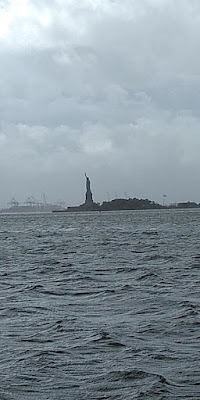 We were on the 47th floor of the Millennium Hotel on 44th Street, just one block from Times Square! I don't know if you've had a chance to visit New York and see Times Square  but it really is electric. The place is just alive with excitement and lights and movement! 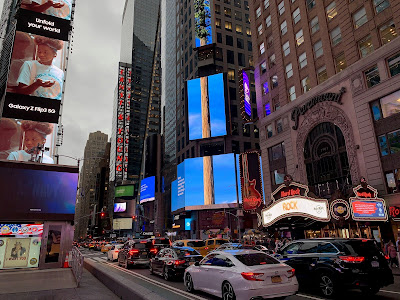 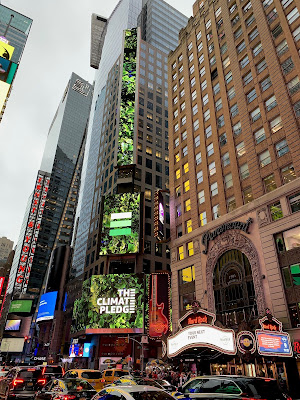 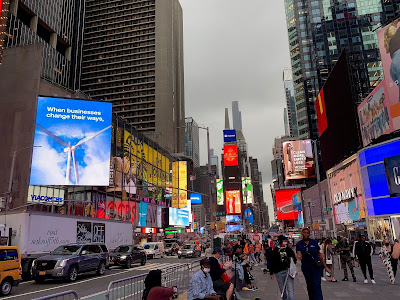 For our Anniversary this year, the girls had made reservations for us at Wolfgang's Steak House, and bought tickets for us to see a Broadway show! Something I've always wanted to do! We saw Come From Away, a play about September 11 when all flights were grounded and 38 planes landed in Gander, Newfoundland. The town of 9,000 people took in 7,000 stranded passengers from around the world. The story is truly phenomenal. And the play is about loving those who are different than you. I highly recommend you check it out, there are clips on YouTube, articles about the people of Gander... it's very inspirational!

This was the view from our hotel ~ 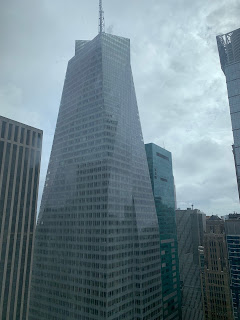 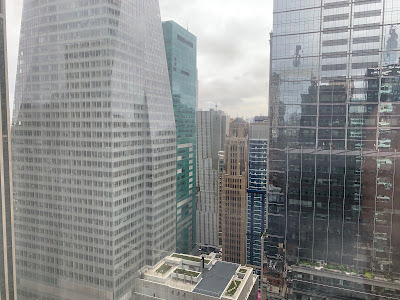 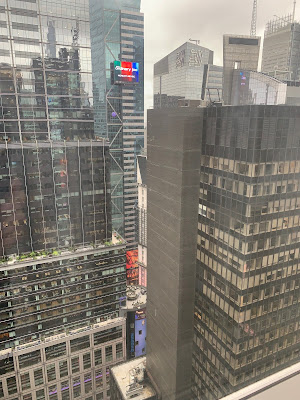 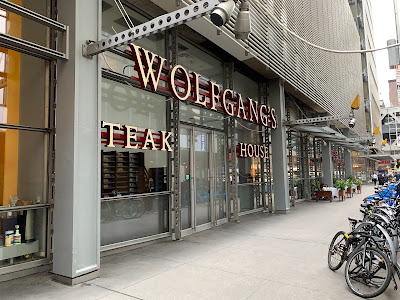 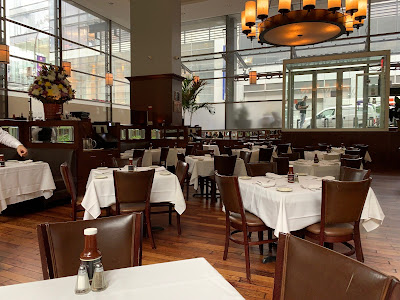 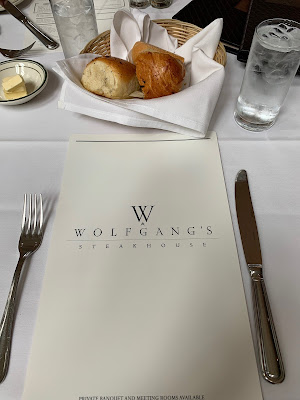 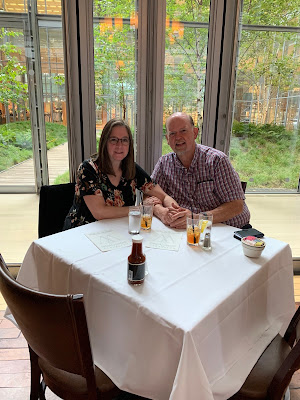 When we left for the theater, it was in the mid to high 70s so we didn't think to bring coats or anything and it was only a couple blocks away so we walked. As we stepped outside the hotel we realized it was pouring rain. Pouring! By the time we got to the theater we were absolutely soaked! But we just laughed it off and enjoyed the evening. (Kinda felt bad for the people sitting next to us though!)
The play was phenomenal. The personal stories, the funny situations, the way the town embraced so many people from all over the world... makes me want to visit Gander one day. 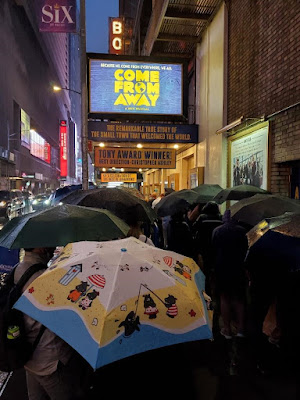 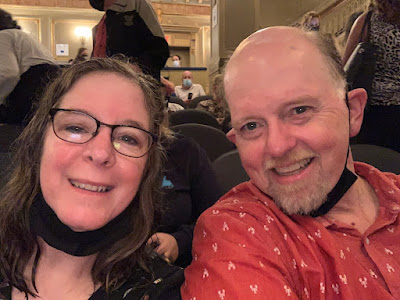 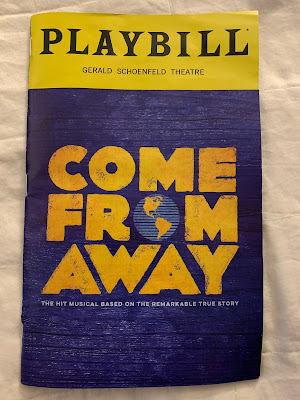 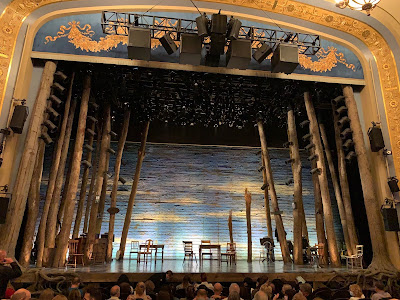 We spent one more day in New York before heading back to Philadelphia, but I'll write about that in my next post. Did you ever get caught in the rain? Have you ever been to New York?
Posted by Cindy at 11:07 PM

How exciting for you! You sure had a great view! I was in NY in 2008 and we saw Phantom of the Opera. So were they checking cards for proof of vaccines? My daughter is going in December.

How awesome to see a live Broadway play abpnd that one sounds really good. I’ve heard about that story. I did bot know it was a play. I really enjoyed hearing about your trip and seeing your pictures. I’ve never been to New York.

What a wonderful time away you had!! I haven't been to NYC since 1970 so it has been a long, long time ago. I did see two Broadway shows back then - Ethel Merman in Hello Dolly and Promises, Promises with Jerry Orbach. I'm glad you all had such a memorable time and thank you for sharing it with us! Loved my visit here! xo

OH my! What a wonderful experience you had! I'm so glad to hear it was a beautiful time in NYC...and that play really sounds wonderful. I would love to see it. Yes, we just got caught in the rain last evening coming out of the grocery store. Even though we had an umbrella, it was coming down so hard and fast that we still got soaked! No fun, but at least we were headed back home where we could change into dry clothes pretty quickly. I imagine you were pretty uncomfortable for your evening out. But you look happy, and that is what matters most. Can't wait to hear the rest of the story!!

Funny you should ask but we did get caught in a rainstorm in London and dried off at Les Miserables! Looks like a wonderful time for all of you in New York!!

I've loved reading your blog for some time now (I have a stepdaughter with Down syndrome, so I like hearing about Beth!). I live north of Boston, so was thrilled to see the wedding in the Public Garden. I hope you enjoyed your time in Massachusetts! Also, I can't wait to see Come From Away at some point (I read the book & it's fabulous!)

Bless your heart - you were soaked! LOL Good thing you two can laugh about it - shows why you have all those years under your belt.
A Broadway show in NYC - that's a dream!!!!

Love reading about the wedding and your adventures in NYC. Your daughter was such a gorgeous bride! I’m glad you enjoyed Come from Away; my family and I saw the play when it debuted in LaJolla and then my husband and I were inspired to visit Gander. We loved Newfoundland- took two weeks and had the best time. I’ve never seen a Broadway show on Broadway though, definitely one for the bucket list.