Probably like most of you our town didn't have a 4th of July parade last year. Earlier this year they said they would cancel it for this summer too, so we were so excited when a couple of months ago they announced it was on again!

Saturday night we took our chairs down to stake out our spots on the parade route. Do you do that too? Chuck picked an area under some trees so we wouldn't be in the heat and then we sat in them until 6:00. The rule is - if you leave chairs out before 6pm the city will remove them and you have to pick them up another day. So most people begin setting them up around 5:00 and then we all sit around and talk for an hour. We parked and sat in our car until about 5:30, then set up our chairs. By 6:00 the streets are completely lined with hundreds of chairs! We love a parade! 😊

Our church only held one service and we headed down right after that. It was so good to see it again! There was one truck (like an F150) with a young family sitting in the back with a large magnetic sign that read, "No agenda. The kids just wanted to be in a parade." Now that's a small town parade! 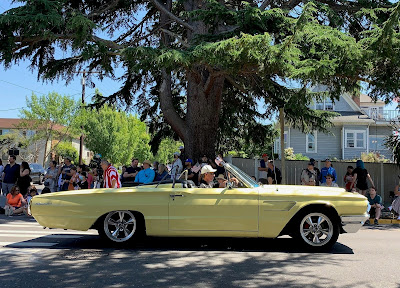 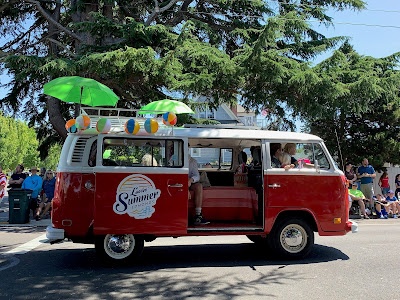 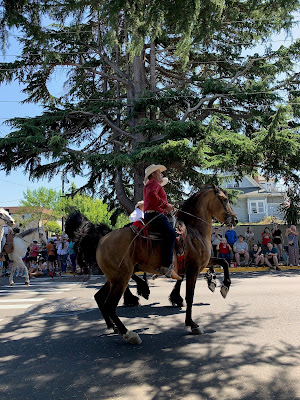 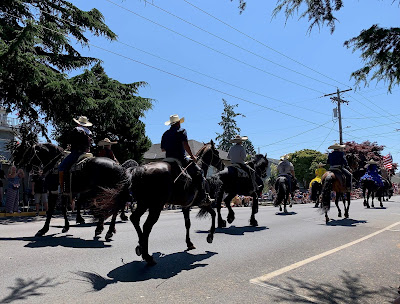 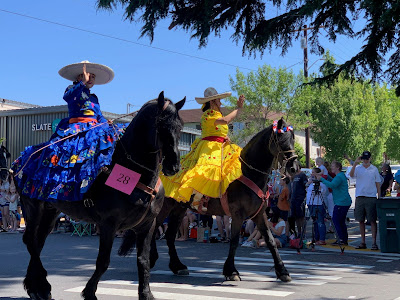 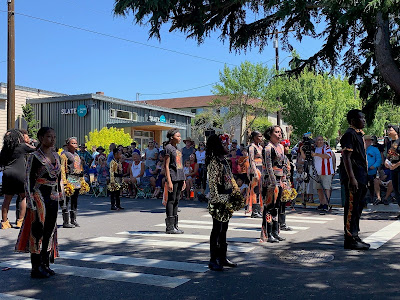 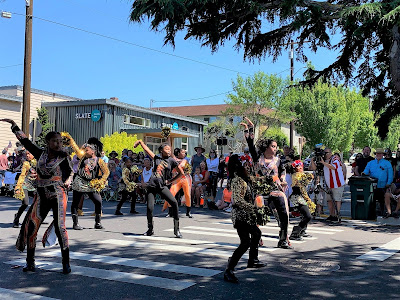 Beth's favorite was of course the Star Wars characters. Although in one picture she's yelling at them, "You're my sisers favorite!!" (Because they were Diana's favorite... when she was 8.) 😊 But you can tell by the smile on her face that she loves them! 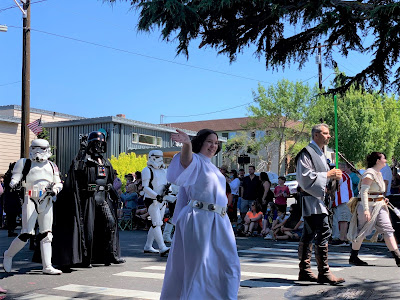 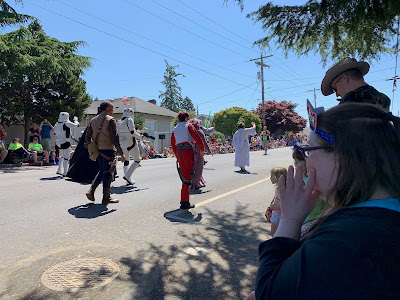 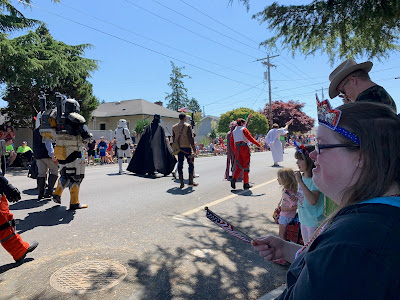 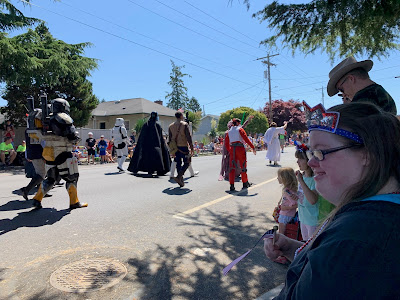 Sunday night we decided to go watch the fireworks, something we haven't done in years. Chairs, blankets, jackets, and we headed to the roof of the library. There's a great view of the fireworks and you beat some of the traffic out of town. 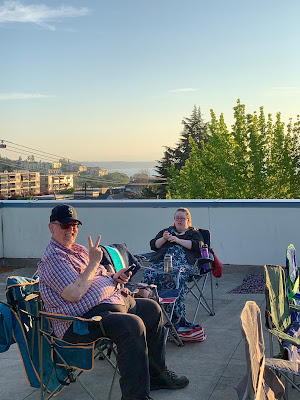 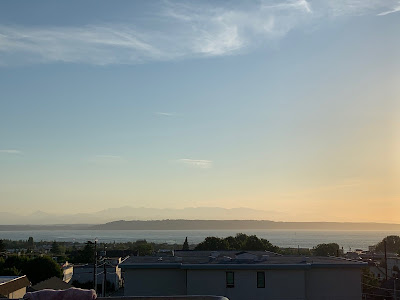 Our little town by the water ~ 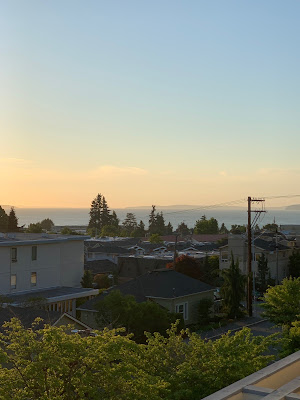 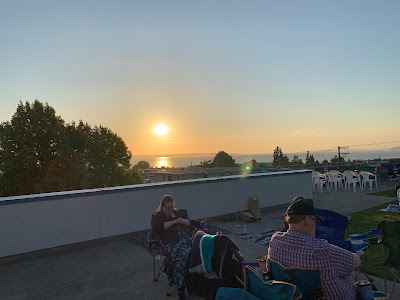 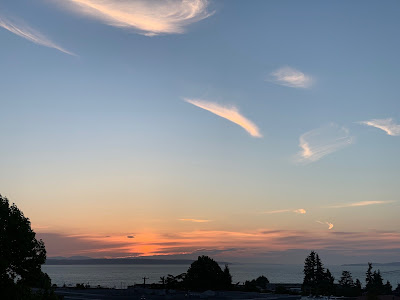 We got there at 8:00. Fireworks started at 10:00. There were about 200-300 of us up on that roof and I was so excited to see them live this year! Then 10:00 came and went. Then 10:15. We figured they were singing the National Anthem, maybe the mayor was thanking all the people who made the day happen... the fireworks happen down at the ball field and we don't hear anything up on the roof. We'd been talking about how long we were willing to stay since Chuck had to get up to go to work the next morning. Finally about 10:40 we left. As we're pulling out of the library parking lot, the fireworks started. The streets were packed with cars, large groups of people out on the sidewalks watching them, there was no place for us to pull over. So disappointed!

I do have today off though and am thankful we got to see the parade.

What did you do over the weekend?

Do you usually go to a parade? Watch fireworks?

Our little town had a parade this year, but no fireworks. We didn't try to go to the parade, because it had been so rainy and we didn't really know if it would happen or not and we didn't feel like getting out in the traffic. Then we heard lots of fireworks all around us last night, but couldn't see anything. It was cloudy and the trees were in the way, but we could hear the booms late into the night. That was good enough for me. At least I know they were happening for some people even if we couldn't see them. I'm okay with that. Maybe next year we will try harder to find them. Happy 4th of July on the 5th!

Nothing better than a small town parade and firework show! Our small town is just a little too small to do their own display, so we have to to the big towns just a few miles away. We watched the fireworks from a distance, they were beautiful! Last night all around us, there was an even better firework show...from 9 until 12...it was pretty amazing!

That parade looked really nice! I wonder what the delay was about the fireworks! I know when we lived in Montana it didn't get dark until after 9:30 so fireworks were usually around 10 p.m. which made for a late evening :)

Cities around us had fireworks but none that I saw in Phoenix. We elected to stay home because the dog is not fond of fireworks and we didn't want him to be home alone. As it was, all our neighbors thought it would be fun to set off illegal ones :)

My town doesn't do a parade but on July 3rd they host Red White and Kaboom! Fireworks, food trucks, music, and lots of people. I didn't go but could sure hear them! Glad you got to enjoy the parade! Sad that the fireworks were so late. Bummer! xo

Our city had a parade this year and the big fireworks show. We went to the parade since it was a block away! We could see some of the fireworks from our house. So nice to see life come back again!

I love your parade photos. I haven't been to a town parade since I was young. We can see several towns from our view lot but there were not that many this year. The local one nearby ended up canceling their fireworks.

OH NOOOOO - did you find out why the fireworks were so late? I mean aftr 10 anyways just gets me. Whew!

Bummer about the fireworks but wonderful that you could enjoy the parade!

I haven't been to a July 4 parade in ages and your post brings back good memories. As for me, I'd just as soon skip the fireworks anyway!

Sounds like the picture-perfect holiday celebration. So glad the parade was scheduled again after all. Beth's proclamation was funny!! I am sure the Star Wars characters did bring her a big smile.