About the time I think this is all behind us, I follow a rabbit trail on line (I've got to stop doing that!) or something comes up that reminds me we're still in the fight of our lives.

They did a biopsy a couple months ago on one of the spots on his scalp and it came back negative for cancer. That spot is just that, a spot of leftover pigment that will disappear in time. Not sure about the others.

The biopsy on his lymph node however was positive. Which is what we've always suspected but I was hoping that it was nothing. Just a swollen gland or whatever. But nope. It's cancerous.

The second treatment they were going to do wasn't approved by our insurance. They'd pay for it, just not in conjunction with the first treatment. So the doctors are discussing our options.

I didn't realize how long a battle this would be. I thought after the initial surgery, they would have gotten it all and we'd be done. Boy was I wrong!

In the meantime he continues to work and feels pretty good. He's dealing with severe psoriasis right now, a side effect from the infusions. We met with the dermatologist yesterday and he said given the cancer still in the lymph node and now the psoriasis, Chuck's team of doctors are talking about changing his immunotherapy treatment to try and knock out the cancer. At this point we don't know what that will be.

His next scan and infusion is scheduled for the 19th.

We're coming up on the one-year mark of his diagnosis and it seems it's been one thing after another: two different cancers, two surgeries, several biopsies, so many doctors appointments, various treatments... and we still have a long way to go. It's starting to take it's toll.

I want to thank you for your prayers. Even though we've never met, your friendship and the caring words you've written over the last 10 months mean so much to me. Thank you... 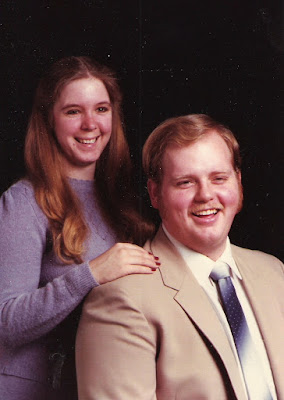 Such a long road. Praying for healing and strength!

Praying that God will give you both the strength and grace you need to carry you through this battle. One day at a time... and praying for the Doctors and Insurance company to come together and do what is right for your husband. May the doctors have wisdom. May the Lord bring healing day by day. Amen.

Cindy I'm sorry to hear it's cancer and I despise when insurance companies in my opinion try to play God when they won't pay for much needed procedures. I will be praying. Stay strong both of you. And what a cute picture of your engagement.❤

Praying for you and your lovely family that this year brings health and peace! You are such a bright spot in this blogworld. Just wanted you to know that!
Hugs!

I'm glad he's feeling well for now but so very sad to get this news. Having been dealing with insurance companies myself on a far less critical issue, I know how frustrating it is, and all the more so when it is a matter of life and death. All prayers coming your way for you both.

Prayers being sent your way for Chuck and for your amazing family. I pray that Chuck will be blessed with strength and peace as he goes forward with further treatments. You are both such special people...bless you.

Prayers lifted. It is always so hard going through health issues, especially when the doctors seem stumped or unsure. Things seem to be on track and I pray that the doctors figure out what is best for Chuck!! Do keep us posted, please!

Oh my gravy. I am sorry this cancer diagnosis and journey have been so stressful. I guess, all cancer diagnoses would be. But having the insurance difficulties just makes everything that much more worrisome and exhausting. Hope the medical team and the insurance can come to an agreement soon and get Chuck properly treated. Another blogger I follow just learned her second little boy has diabetes. They are handling as well as can be expected but it must be so hard on her little ones. Prayers going up for a tolerable and effective treatment that brings complete cure.

Keeping Chuck in my prayers along with you and your family. ((Hugs)) I'm so sorry to hear this news.

I cant beleive its been a year too!!! Unbelievable. Still lifting up prayers. Glad he's still going on with life as usual. Hopefully this next treatment will take care of it completely.

Hi Cindy, love your engagement picture, you two were so cute! We got engaged in 1981 too, seems like a long time ago. I’m so sorry Chuck is still battling so much, but very glad he feels well. I love reading about your lovely family. All my best, Sara P.

Praying for Chuck and your family. I love your engagement picture, you were mere babies! We were too, so young! One day at a time, may God bless you all...

Praying for you and your family