She Bought Breakfast From Clear Across The Country!

The morning after we moved my dad, (May 7th) my sister and I got up and got ready to go see him again. There's a fun diner right on the way, it's decorated in a 1950's theme and she suggested we stop there for breakfast on our way. Absolutely! I love that place!

Then she told me Diana was going to pay for breakfast.

(My youngest Diana lives in Pennsylvania.) "What do you mean?"

I guess Diana had contacted her and wanted us to tell her where we were going to eat so she could call the restaurant and pay for our meal! For Mother's Day! Plus, the day after Mother's Day was the 14th anniversary of our mom's death.

Diana said she wanted to honor us, and grandma.

Awwwe!! What a fun surprise!

I think it was the manager who came up and told us that our bill had been paid for. Then he wished us both a Happy Mother's Day.

After we were done our waitress came up and said, "Your bill was paid for. Your daughter called in and paid for it over the phone. I didn't even know you could do that!"


Thank you Diana! We love you! 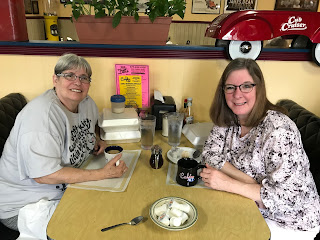 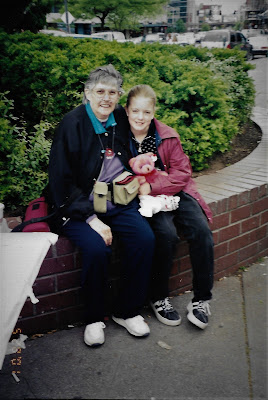 What a blessing! I'm glad you got to spend time with your sister. I didn't know you can pay a restaurant bill over the phone either. Who knew? Have a blessed Sunday!

Oh my goodness!!! What a lovely, fun Mother's Day surprise and how special for you and your sister to be together and honored at the same time. I love seeing you both at the table and what a treasured picture of Diana and her Grandma. I'm so glad you were able to have a wonderful Mother's Day, I hope all is going well with your dad.
Take Care,
Saimi

Cindy I just went back and read your previous posts. I'm so glad your dad is adjusting to his new living conditions which sound and looks amazing!! Animals in the courtyard, wow!!! I Love his bright room with the sunlight. The sun seems to rejuvenate the soul. Now with him in a good place, your sister can start getting her life back and she'll be in a good place! Your a wonderful sister and I know your help and presence was very much appreciated.

That was so sweet!

What a very thoughtful and sweet gift from your daughter!