At The Last Minute

We don't celebrate Halloween much around here. When Beth is out with her friends and they're making Halloween crafts, she opts out. When they talk about their costumes, she doesn't join in. We've just never been big on Halloween.

So the day before Halloween we were driving all over town, in and out of stores looking for the perfect costume. We bought a skirt and combined it with a few things we had a home and she was absolutely thrilled. I even heard her squeal as she was getting dressed! 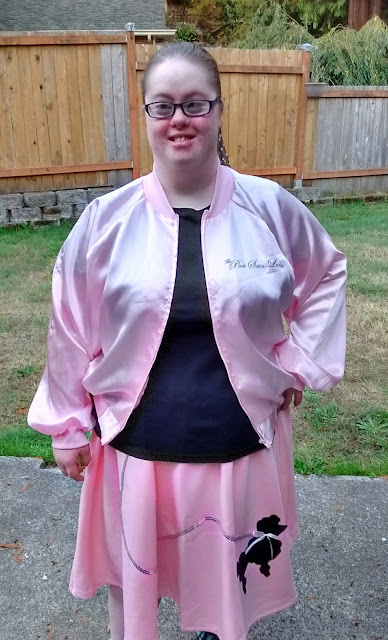 At All Aboard on Tuesday they bowled one game instead of the usual two so they could have a party. I'm not sure what all they did but when she got home she told us that she won $10 in the costume contest! Not bad for a last minute find!
Posted by Cindy at 9:58 PM

Email ThisBlogThis!Share to TwitterShare to FacebookShare to Pinterest
Labels: Adult with Down Syndrome, Boyfriend, Costumes, Love

Beth looks adorable, she is very pretty in pink! I can see why she won $10.00 for her costume. I'm glad she had fun, Halloween doesn't have to be all about scary things, sometimes, it's just about having fun!

Ah look at that smile. She's so adorable. That's a nice costume. It looks good on her.

Great job in putting that costume together. She looks quite pleased!

That is a real poodle skirt, Beth.

So glad Nick inspired you to dress up.

winner winner! That's awesome!
Ahh - young love makes you do rash decisions all the time, does it not? :)