Beth finally decided it was time to cut her hair. She kept telling me all throughout December that she wanted it cut and when I'd ask her, "Should we do it tonight?" she always answered no.

Until a few weeks ago when she shocked me by saying, "Yes."

So we went into the bathroom and I cut off about 10-12 inches. I thought about having it done at a salon so she could donate it but she still has alopecia and I didn't think they would accept it.

So she's back to having shorter hair and she loves it! Easier to wash, doesn't get tangled around her when she sleeps, and it's easier to brush. 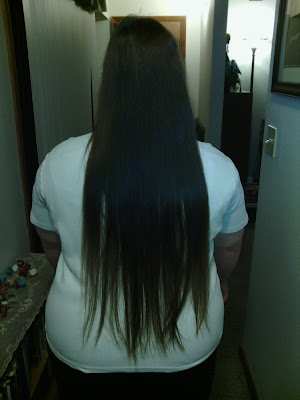 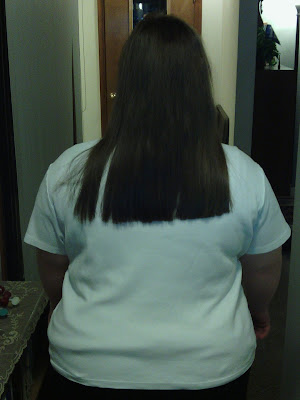 We did it at night and the next day I spent some time really cleaning it up. It looks better than this now. She said Nick played with her hair for a minute after she cut it, but he didn't say if he liked it or not! :)
Posted by Cindy at 3:13 PM

Email ThisBlogThis!Share to TwitterShare to FacebookShare to Pinterest
Labels: Adult with Down Syndrome, Boyfriend, Hair

This so reminds me of my hair! I used to wear it down to my waist in a giant braid every day. Then I went to college and decided it was time to cut it off. Now I wear a chin length bob!