We spent some time at the mall today. Beth got paid last week and the money was burning a hole in her pocket.

Have you seen the newest Muppet movie? It's got Amy Adams in it and a couple other actors. To be honest I haven't seen it but I suspect it's pretty tame considering it's.... the Muppets. Anyway, that is Beth's new obsession. She had $20 and couldn't decide about getting the movie or the CD. We checked at Fred Meyer the other day but she decided to wait.

Today at the mall she chose the CD. She wants to upload the music to her MP3 player so she can take it to karaoke. (She also has a CD player that she brought with her to the mall so she listened to it on the way home!)

Walking through the mall Beth pointed aheaded of us, "That's Diana's favorite car!" Sure enough, there in the middle of the mall sat a 2012 Fiat. Beth looked at her, "Diana you get that car!" If only it were that easy. :) 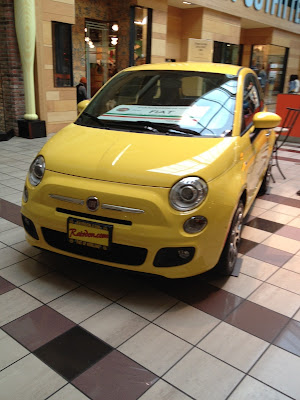 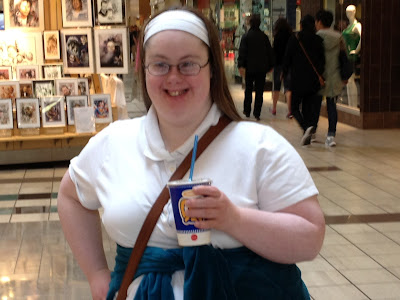 We had a buy one, get one coupon for Auntie Annes so we just had to stop! Beth saw Andy there. He's a friend from bowling and he also has Down Syndrome. Diana said they had seen each other earlier and were both kind of shy. They both stopped and looked at each other, said Hi then walked away. At Auntie Annes though he was very friendly, they smiled at each other and Beth said, "See you on Tuesday."
At the Disney store she found a Muppets water bottle. She almost bought the mug but decided on the bottle instead.
Our next stop was Target. Beth said she had a gift card but she didn't know how much was on it. Too often we get to the check out to find out there's only $2.86 left. This time the guy ran it through the machine and told her there was $50 on the card!!! Seriously?!? Wow! I guess she's had it since Christmas! That's very unusual for Beth! She giggled a very excited, I-can't-believe-I-have-that-much-money- giggle and we were off to the music section.
She found the movie - for $6 less than any other store - plus a Disney Princess CD set. She got one set for Christmas so she bought the other set today. If there's one place this girl is the happiest, it's the mall. She adores shopping! 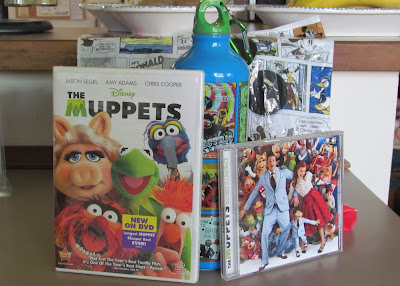 And now we're changing clothes and getting ready to go to the Good Friday service at church. Today we remember Christ's sacrifice for us on the cross. It's hard to call it a celebration; what He did, taking on all the sin of the world and dying on a cross so I could have a relationship with the One True God, Creator of Heaven and Earth is definitely something to celebrate. But knowing what He endured, what He went through for me, is very humbling.
Posted by Cindy at 5:04 PM

I agree with you how humbling it is what Jesus did for each and every one of us.

Looks like a fun day out on the town! Happy Easter from your newest follower!