Chains for Your Feet

Seattle is in a deep freeze. We had a few inches of snow fall on Monday, then the temperatures dropped into the teens. Watching the news last night, the temperature outside was 11. Just a tad nippy! That's unusual for Seattle.

So when Chuck headed out to work, I put out the Trax. Have you seen these? They're incredible! They work like magic, making it viturally impossible to slip on the ice. Slip 'em on your shoes and waa laa! I'm surprised everybody doesn't wear these. They're called Yak Trax and we got ours at Big 5 for about $20. A little steep, but SO worth it! (They may be cheaper in the off season.) 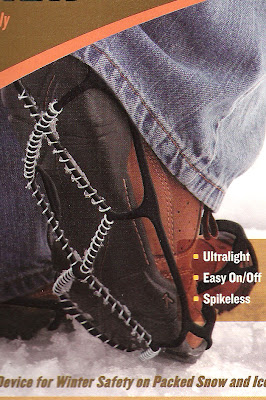 Chuck's also been taking the train this week. The freeways have been parkinglots with all the accidents and spin outs. People have just given up, parked their cars on the side of the freeway and walked home. Public transportation has been a mess. I think they said on Monday night there were 200 busses spun out or stuck on hills. Chuck usually takes the bus into work, but (my brilliant husband!) thought to take the train into downtown Seattle. He sent me a text this morning, "Made it in just fine. Right on time. No hassles." Did I mention he was brilliant?
Posted by Cindy at 9:52 AM