Discovered Five Years Ago - But Still

"The English language has a few limitations. One such problem is describing size - words like big, humongous and immense don't come close to describing the objects astronomers are discovering in deep space. There are definitely no words to describe their latest find, dubbed the BOSS Great Wall which is a supercluster of galaxies over 1 billion light years across. Making it the largest structure observed in the universe. So far.

Named after the Baryon Oscillation Spectroscopic Survey - an international effort to map galaxies and quasars in the universe and is like cosmic webbing. This wall is made up of 830 separate galaxies that gravity has corralled into four superclusters connected by massive filaments of hot gas. This creates a twisting structure that resembles a cosmic honeycomb."

This is an artists illustration of what the Wall looks like ~ 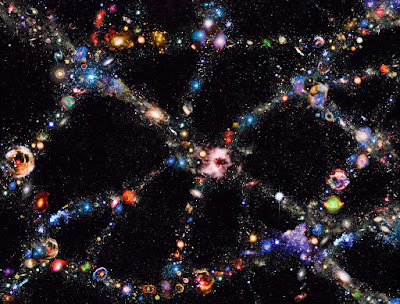 NASA reports, "Astronomers suspect there may be many more BOSS galaxies than the 830 they can see."

That's eight hundred and thirty galaxies, each one is 1 billion light years across. 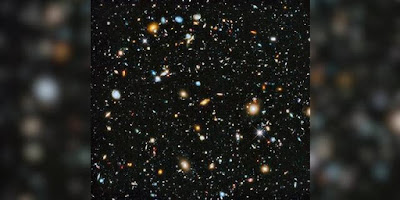 All I can say is, what an awesome God we serve! He's the master Creator! He's the maker of heaven and earth and is the only one worthy of all praise, honor and glory! Praise to His glorious Name!!

I always chuckle when I hear a scientist discovered this or that. God placed it there years ago yet at times He doesn't get the credit for it. So true, He is a mighty God we serve!

A supercluster -- what a beautiful idea. And this looks gorgeous -- I hope his illustration is spot on!

Wow, I didn't know about this! Amazing

WOW! Just wow! My mind cannot comprehend that. Thanks for sharing!