A No Show, A Hospital Run, and Four This Year

Work has kept me on my toes lately. We had water baptisms on Sunday and I knew the tank had been emptied and cleaned so I checked it today and saw the covers hadn't been put over the top. They're 4 large pieces of wood covered in carpet and they're very heavy. I called one of the custodians and we tried to figure them out, it was like a jigsaw puzzle.

When we were just about done with that I got a call on the radio that there was a situation in one of the women's bathrooms. I left the custodian to finish with the tank and I found another custodian had been cleaning the bathroom sinks when one of our huge mirrors fell forward and landed on her. Thankfully she wasn't hurt and it didn't break, it just kind of slowly leaned forward and she braced it. I went to the maintenance office, grabbed some duct tape and MacGyvered it! While doing that, I got another call saying my delivery had arrived so I went upstairs, let the driver into our storage area, signed the invoice... it was just non-stop today.

I hired a new custodian last week and he was due to start yesterday at 2:00. He never showed. I texted him at 2:30 telling him I was a little surprised that he didn't even show up to his first day at a new job. I asked him if he was available today and he said yes, but gave no explanation as to why he didn't show up. I was trying to show him some grace and mercy. He called me this morning and we talked for a few minutes about the paperwork and his uniform. "Sounds good. See you at 2:00." But again he didn't show! At 2:30 I called his cell and it went straight to voicemail. I left a message and then waited. Finally at 2:45 I texted again only this time it was to tell him the job wasn't going to work out and he wouldn't be working here. So now it's back to square one looking for a new employee. Frustrating.

Right after I got home today I got a call from a friend who needed a ride home from the hospital. Actually the call was from his late wife's daughter, who happens to be his Power of Attorney but lives out of town. His procedure ended up taking longer than expected and all the drivers from his assisted living place had gone home. What?! Why were they allowed to leave when one of their residents was still at the hospital? I just didn't understand that! Anyway, I hopped in my car and drove up to get him. Thankfully it's only 5-10 minutes from my house. I took him home and a couple nurses came with his electric chair and took him on up to his room. Would they have left him at the hospital? I'm glad I was available!

Every few days I check the bird's nest in the wreath and today... 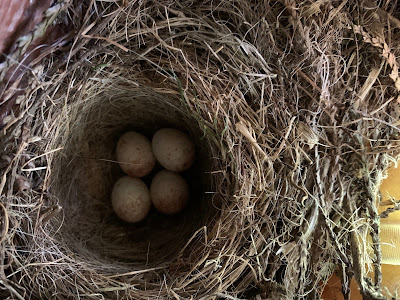 There's 4 tiny eggs! This is so fun! I believe the birds are called Junko. They're a type of Sparrow. I saw the mommy bird in the nest so I stuck my arm out the front door so I wouldn't scare her and got this picture: 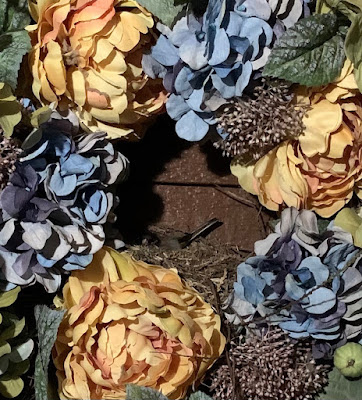 She's keeping them safe and warm!

I hope you're all doing well and enjoying Spring. It's hard to believe May is right around the corner!

First of all, I love your wreath, very pretty. Great photo of the eggs and the mama bird. Hope you'll be able to show us some more pictures.

I can't believe someone would not show up for a new job 2 days in a row. Wow!

Seeing the eggs hatch will be so fun! Keep us posted! I can't believe those people left a patient at the hospital. Shaking my head. Thank goodness you were able to help. xo

Yikes, I believe if I were that person's relative I would be letting the management know about that fiasco! That is ridiculous. Now, about those eggs in that nest in your wreath...that is just precious and wonderful! I am happy for you to be able to see them up close and personal, and that the mother bird permitted you to take a quick picture! What a treat! I hope you get to see the baby birds and can take pictures of them too! Regarding the new employee who didn't show up, well, I guess now you see why he is unemployed...doesn't sound too reliable, and you are better off without him! Hope you can find someone more suitable for the job soon, because it sounds like you need help there in a hurry! I remember those days before I retired, since I held a very similar position as yours, and there were times things could get very hairy! You sound like you have the right personality and gifts for such a position...you take things in stride and just take care of them. You are a real blessing and asset to your church employers. I hope today will be a bit calmer, however! Blessings to you dear one!

Oh my gosh.... those eggs. how precious.
I'm so sorry that run around you got from the custodian. Back to the drawing board - just shows the perfect fit is still out there.

How sweet with the eggs in the wreath :) Glad you got such a great picture of them! Sorry about the custodian blowing the job off like that. I am doing a temporary job at the unemployment office here where I live, just opening and sorting mail, but the number one reason people get fired/terminated from their jobs is attendance issues or not showing up. Sad I think.

Oh my, too much going on. You have been busy. That's a shame about the person who didn't arrive for his new job.