What We Know So Far

We had a Zoom meeting with the immunotherapy doctor last week and he showed us the MRI scan they did on May 15th. Looking down through the top of his head you can see the tumor very clearly on the right.


The white spot in the center is his spinal cord and the round spot on the right is the tumor
(The tumor is actually under his left ear, this picture might be flipped. I quickly snapped a photo when the doctor showed it to us during a Zoom meeting.) 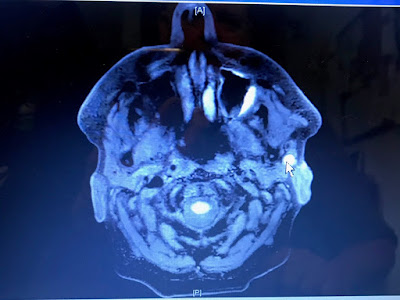 * I went out and bought a 3-ring binder to keep all of our notes and doctor's contact information, lists of medications, appointments... our calendar has never been so full.

* I've printed out the photos and names of all the doctors so I know who we're talking to, who we're meeting with...

* Melanoma doesn't respond to chemotherapy. So we're not going that route. We're actually happy Chuck won't have to go through chemotherapy.

* Radiation will target only specific areas and Chuck has so many nodules plus the tumor, that radiation's not the best treatment.

* His cancer cells have mutated to BRAF G469R and they're not sensitive to pills, so pill therapy's not an option. (I've read about BRAF mutations but I still don't understand it.)

* With the doctor's recommendations we've decided on IV immunotherapy and he begins treatment this week. Each session is 45 minutes and he'll have one every 3 weeks. They'll monitor the meds closely to make sure the side effects don't become overwhelming.

* None of the doctors have said anything positive or encouraging. They just give us the facts.

I was up until after 1:00 in the morning earlier this week reading about BRAF genes and melanoma and different medications... there was nothing positive. Everything I read about Chuck's cancer was negative and scary.

You know how you click on this link and that link, well after a while I found myself on a list of testimonials - page after page of people who have this type of cancer who have survived! Some were from people who are still going through treatment but the rest had survived and were now cancer free! Those are the ones I read over and over.

I copied some of them to a Word document, included the website, and saved it to my docs. Then I printed them out and put them in our notebook.

It gave me hope!

Our pastor spoke on David and Goliath this last weekend. A seemingly impossible fight. How Goliath was massive and scary... and Goliath thought he was preparing to fight the Israelites but he was actually facing their God. The Holy God of Israel. Guess who won?

That gave me hope!

God is on our side and He's so much greater than the enemy who only wants to steal, kill and destroy us.

The enemy's strategy is intimidation and fear. Which is what I got when I was going through all those websites. But my God is a warrior. Zephaniah 3:17 - The Lord your God is with you, the Mighty Warrior who saves.

I am sending all the hugs & prayers. It has to be so scary when you get facts & no compassion - I think doctors forget there's a real person with real feelings on the other end.
Do they know how long this has been there?
Hang in there. I know this is so much to handle & deal with... praying for all the comfort of God to fill you up!!!!!

I'm sorry about all the treatments that will not work for him but I am so glad you came upon the testimonials of people who have had a positive outcome. Praying this will be the case for Chucks recovery. Holding you close to my heart and asking God to hold Chuck, you and your family in His.

Sorry about this overwhelming news. Praying that the treatment you are going forward with will go well. Good idea not to read too much on the internet...

You all will be in my prayers. I went through cancer a few years back and God gave me a peace like I had never had before. I usually am a nervous wreck before going to a doctor, but during that year of facing so many new doctors and treatments and surgeries, I was mostly calm. God is faithful!!

I added you all to my prayer list, my friend.
May God bless you with His peace.
You are certainly organized and that will no doubt help so much.
Hugs, my friend.

Hold on to the success stories and read them often. Hold the positive. Do all you can to remain health and wellness for all of you, including your peace of mind, and don't dig too deep on the internet unless you know the source is reliable. If you have any hesitation with your docs, get a second opinion. YOU TWO are in charge. And you will be strong. Sending many prayers and love your way.

I had to go back and read some of your older posts, because I have been thinking about you and Chuck and wanted to know how he is doing. You will both be in my prayers with all the decisions and treatments and challenges that you will be going through. I love how positive you guys are! I truly think that attitude plays a huge part in how a person deals with cancer, so you guys are on the right track!

The photos your girls took are so beautiful!! What a blessing to have them close!

Hugs and Love to both of you!!