Do you remember when TV stations would go off the air at the end of the day? At a certain time each night the show would end and something like this would appear: 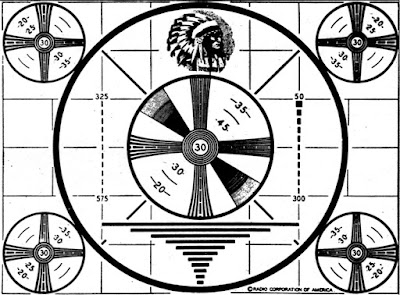 This is what we had in San Diego, I don't know if it was the same across the country. And when this showed up I knew it was past my bed time!

So anyway, our email isn't working. So I'm not getting a lot of your posts that way and I'm not able to respond to your comments on my posts and I can't upload photos from my phone... we've been trying to figure out the problem but it's been quite a few days now and I think we're gonna have to call the tech and have them talk us through it.

We're in the process of planning a trip to Tennessee, Alabama, Mississippi and Louisiana. We've never been to those states before so we're looking at all the different things to do there. In Nashville there's a restaurant called Woolworth on 5th, it's in an old Woolworth store that was in the news during the civil rights movement. Plus, I worked at a Woolworth store in San Diego for 5 years right after high school so I'm really excited to see this one! We're going to the U.S. Space and Rocket Center in Huntsville, we're going to drive over the Selma Bridge... I can't wait!


Have you ever been those states?
Do you have any suggestions for things we should see or do?
Posted by Cindy at 5:34 AM

We have had technical difficulties this past week, I feel your pain. I have been to all of those states over the years. Enjoy planning your trip. Hugs

Oh my goodness I remember the test pattern. I remember when the stations would play the national anthem before going off the air and when coming back on. I miss those days.
Have fun on your state tour. I've never been to those states so I haven't any suggestions and I hope you are able to get your email difficulties resolved.

Yes, we had those too, although I haven't seen one in a very long time! I'm so sorry about your computer problems, I have been having problems with slow loading time and not being able to comment...must be a thing going around, who knows, crazy!

What an exciting trip! I've been to Tennessee and Alabama, they are absolutely gorgeous states. You will have so much fun!

And yes, I've Jack Rabbited! My thoughts jump around like crazy.

Have a great week, Cindy!

I remember being young & on summer break - my goal was to make it where the TV turned off at night. Isnt that crazy kids today dont know that feeling.
I love me some Nashville - its where my grandkids live.

That sounds like a great trip you are planning. I loved Woolworth's. Also I remember the end of the day sign on TV too. I grew up in Illinois.

I sure do remember that screen shot on those TV's in the 50's! Sounds like you have some good plans already for those states. I've been in Tennessee but only driving through...