A Love Without Limits - Paul and Kris Scharoun-DeForge

Have you heard of these guys? I read about them in the Readers Digest this month.

They are celebrating their 25th Valentines Day as husband and wife but they won't be together this year because Paul has dementia. He was moved into assisted living and it broke Kris' heart.

"He opened up my world," Kris said. "I looked into his eyes and I saw my future."

There is a picture of them sitting on the couch, her head is resting on his shoulder and her hands are wrapped around his arm.

They both have Down Syndrome.

It goes on to talk about how he proposed, how they worked together to organize their wedding and how they have served each other for the last 25 years.

I couldn't help but think of Beth and Nick. Of how different their relationship is from Paul and Kris.

The first few years that Beth and Nick dated, he talked non-stop (seriously!) about getting married. How they would get married and move to L.A. and he would become a firefighter and they'd live in a $500,000 home... none of it was realistic and he didn't want to talk about what a real marriage could be like. Even the good things! I understand having goals and reaching for the stars and all that, but no matter how much you tried to talk about this realistically or ask him honest questions about it, he would argue with you and insist this would happen. His mom finally put her foot down and told him no more talk of marriage. Not for a while anyway. We know neither one of them is ready for marriage (mentally or emotionally) let alone moving to another state by themselves.

Nick is very controlling and Beth is very meek. She often gets angry at him because he texts her almost constantly but she never says anything to him about it.

Beth won't look at Nick. Her head is usually down and she'll kind of grunt but they don't have conversations. Not face to face anyway. When they're with each other, she barely looks at him.

In fact, I've had her practicing saying Hi to herself in the mirror. To look at her face, or her chin or nose if looking at her eyes is too hard and say "Hi!" Just to get comfortable with looking at a face when she talks.

It's things like this that show us they're just not ready. And that breaks my heart for both of them. 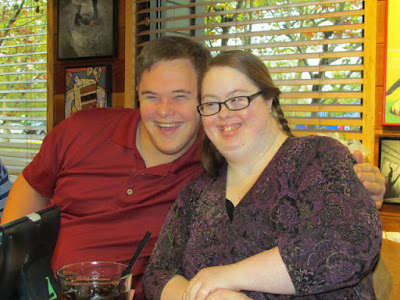 Last month he was banned for a week from All Aboard because they can't keep their hands off each other. Beth was put on a separate bowling lane for the same reason. Last week we stumbled upon... a situation... that has us concerned. Right now it's harmless (because neither one of them drive and they live 45 minutes from each other) but it could lead to some more serious issues.

There's just so many things going on right now with the two of them and I don't know if it's going to to escalate or eventually die down and become nothing.

I'm so torn because they are both adults. I feel for them, I understand what they're going through. But, even though they're adults they don't understand the full impact of some of the choices they're making.
Posted by Cindy at 10:24 PM

Awww Beth, this breaks my heart. I am glad she is under caring eyes in and out of the house. Good luck. After all, human companionship is a basic human need, so I hope she can find a good balance.

She's lucky she has her family to help and guide her. Jody Lynn is right, human companionship is truly a basic human need. I hope everything works out for all involved.

Oh gosh - I cant imagine how hard it is to set the boundaries for them knowing their adults, but also knowing they may not understand fully the situation of consequences.
How does Beth handle being so "hands on" with one another when she has trouble looking at him? That's an iffy situation, isnt it?
& that story of that couple... oh my heart. Any couple that has been together so long & then an illness take them apart. This world is hard.

Oh dear, what a difficult situation. I hope that you can resolve the issues without any problem. Choices are hard, no matter what, but even harder for those young adults with disabilities. You will all be in my prayers.