We've been emailing Diana regularly since she left and she told us that Beth texted her last week. Okay. But then she said that it's the first time Beth has sent her a text since she moved!

I asked Beth why she wasn't texting Diana anymore and she gave me her usual answer, "I dunno." I told her that I thought she did know and I asked her again, "How come you don't text Diana?"

Then she said, "I don't know where she is. I don't want to bother her."

Oh wow. I don't really know what Beth thinks about Diana moving. In her mind it seems, Diana has just... disappeared. I've gone to google/maps and showed her where she's living now. I pulled out our road atlas and we've looked at a map of the U.S. I've told her that just like my dad and sisters live their lives in San Diego, going to the grocery store and doing their laundry, Diana is doing those things in Philadelphia.  Course, I'm showing her all this on a piece of paper and I'm not sure she really understands the distance part of it. I don't really know what else to say or do.

In her mind, Diana is just gone.

So on Easter we facetimed with her and Beth got to see her and talk to her. I think that helped. Also, Diana is now texting her and telling her that she's grocery shopping, or headed to work and now Beth tells Chuck and I everything that Diana is doing.

I don't know if she really comprehends the whole thing yet, but we'll just keep trying to explain it.

A few days ago we were sitting at the kitchen table and she told me she never wanted to move out of our house. "It's too hard to say goodbye." 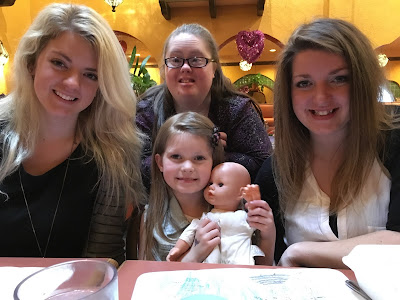 wow, interesting perspective from Beth. I'm glad she's back in touch with her sister.

it would be hard for us to say goodbye to you for whatever reason.

Good on you Di.