I'm Not Really Sure You Can Call It A Proposal

Beth came upstairs a few weeks ago, screaming and yelling and jumping up and down. "Me and Nick engaged now!!!"

She handed me her phone and sure enough, he had sent her a text, "You and me are engaged now Beth." Oh my goodness she was ecstatic! I kind of let her have the moment because she was screaming and jumping around. "Wow Beth!! That's so exciting!!"

A little while later she came back upstairs a little more calm and I sat down with her and explained very gently that when a man proposes to a woman, he does it in person. Face to face. Not by a text.

And he asks her, 'Will you marry me?' he doesn't tell her that she will marry him. He politely asks and waits for her answer. And he usually gives her a ring.

She was still pretty excited but I think she realized there needed to be more than just a text. Her and Nick see each other a couple times a week; they're in an art class together and on a bowling league. A few days after she got the text, she came home said that Nick gave her a present. She held out her hand and showed me a ring.

Nick has given her a promise ring. Awwe! Now that's more like it! Way to go Nick!! :)

Nick's mom and I try to get them together as much as possible outside their group friends. She called me recently and invited us to his celebrate his birthday with them. We all went bowling (Nick's dad and I didn't bowl - I'm wearing a boot and I'm not sure why his dad didn't bowl) and Nick decided it would be boys against girls! The girls won, woohoo!! 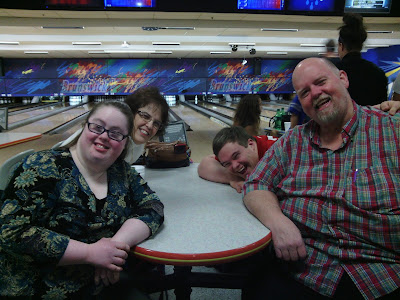 Nick wanted to go to Azteca for dinner so we left the bowling alley and went out for some yummy Mexican food. We love Azteca! I planned a surprise party for Chuck once there and had about 20 people surprise him as we walked into the back room.

But anyway, his mom and dad and Chuck and I got to talk and just get to know each other a little better. Beth and Nick are sure growing closer each week and are definitely talking about having a future together. 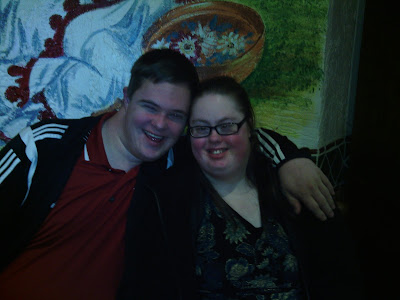 awww, this is so cool. Congrats to Beth! Hopefully things will continue to grow between them.

This IS jump up and down exciting. Hoping all the good things for Beth x

So exciting! I'm glad Beth has such a wonderful boyfriend! They sure do make a cute couple!

What a beautiful couple!