A few months ago Beth began cleaning out her room. She took down a huge poster that had all the Disney Princesses on it. Allie was more than happy to take it off her hands!

Then Beth decided to get rid of all of her big Disney books. The whole time she was growing up, she collected these books. We'd buy them while on vacation; family members would get them for her on her birthday or Christmas. She must have more than 30 of them!


She wants all of them gone. 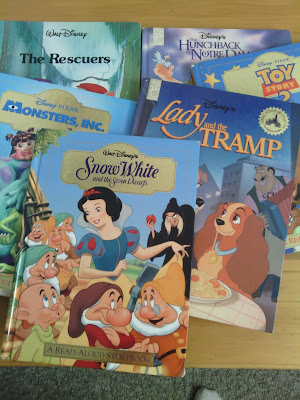 (I just can't bring myself to get rid of them yet, plus I did put a few aside for Allie.)

I still think Beth loves everything Disney but she's going to be 31 in a couple months and she's kind of outgrowing the whole princess thing. Kind of.

See, she has a friend at bowling who loves the Frozen movie. I guess she has a lot of merchandise from Frozen and her enthusiasm is rubbing off on Beth. Since school is starting and every store is filled with back-to-school stuff, Beth has been anxious to go shopping. I teased her recently and told her that she's been out of school for a long time! "What do you want with back-to-school stuff?"

Diana, Beth and I were at Target the other day and Beth literally ran to the back-to-school section. She held up a backpack. "This the one I want!" "To hol my stuff." So this is the backpack she bought. 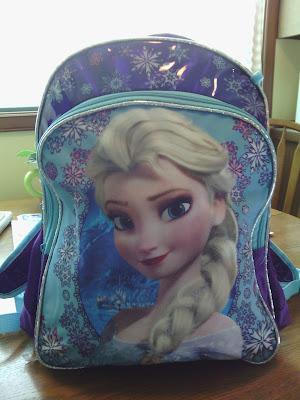 She has also recently purchased a Frozen tote bag, a bedroom rug, the CD... She has decided she wants a Frozen themed birthday party this year. And she wants to invite the friend from bowling who loves Frozen. She's also now regularly reminding me that "her birthday comeen up!" (It's in October.)

So, Disney is out. Well, some Disney. Okay, just a few Disney items are out. Very few.