We're back. The week of prayer and fasting is over. It was harder than I expected but the Lord revealed a bit of Himself to me. It truly was a blessed week.

On Monday Beth had a doctor's appointment with her endocrinologist and it went well. Although, as we're driving on the freeway I sort of yelled out, "I forgot the camera!"

Beth responded with, "Of course." She knows me well. :)

It was a short visit because as of right now, her thyroid levels are normal. He said that a few patients that have the radio-iodine treatment 'get lucky' and their thyroid continues to release a small amount of hormones. This usually results in a normal functioning thyroid for the rest of their lives.

We've been to a local clinic a couple of times to have her blood drawn and those results showed a spike in her thyroid levels right after she had the treatment. He said the thyroid sort of shoots out all the remaining hormones just before it dies and would explain her 10 lb weight loss. As her thyroid levels began to drop and reach normal, her weight will stabilize. Which it has. Unfortunately, as the levels drop below normal, she could begin to gain weight again.

We're working very hard to keep that from happening.

She'll have to go back to the clinic in 1, 3 & 5 months for more blood draws, then we meet with the doctor again. The hope is that her thyroid, even though it's 'dead' will still be releasing enough hormones so she won't have to take medication.

If it isn't, she'll have to go on medication, then we play the adjustment game of how much is too much and is this causing side effects... I know many of you have been there and it's not a game I'm looking forward to.

As far as her weight, she's trying to eat better and exercise more. She gained back some of the weight she initially lost but hasn't gained any in the last 2 weeks. It's always been such a battle in our family. We can gain weight just by looking at food from across the room.

This afternoon Chuck and I were sitting at the kitchen table discussing this week's menu and filling out the grocery list. Beth came upstairs and began to fix her lunch. She really made some great choices and I just had to take a picture! 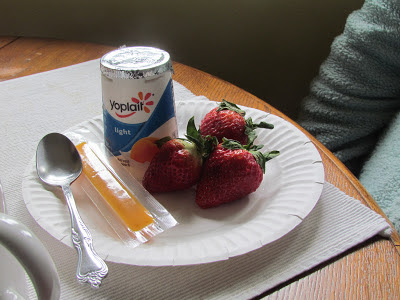 Email ThisBlogThis!Share to TwitterShare to FacebookShare to Pinterest
Labels: Adult with Down Syndrome, endocrinologist, thyroid, weight

I am so glad Beth is doing well - and weight loss too!

That's good, that things are going well for Beth following her thyroid treatment. And a week of prayer and fasting sounds worthwhile and important too.