Where Has The Time Gone?

The time has flown by. I'm sorry I haven't written.

The three days of Beth's treatment went very well. Every time I'd go down to check on her she'd be smiling, singing, watching TV... it really wasn't difficult at all. Over the weekend we washed her bedding and her clothes. I also scrubbed the bathroom she used. I don't know how much I was supposed to do so I washed the walls and the floors and everything in between. :) She sees the doctor at the first of next month for lab work so he can make sure this radioactive iodine treatment worked. Then they'll prescribe her new medicine. I'm hoping and praying it's better then what she's been taking. She's been eating healthier plus has been off this medicine for over a month and she's lost 20 pounds already!!

Diana was at the European premier of Les Miserables today. (Her reason for going to London.) I watched it live on Yahoo Movies and got to see her in the crowd. Helena Bonham Carter was walking the red carpet signing autographs and passed right in front of Diana. The cameras were there to capture it all! A short time later I got a text saying she received a free ticket and was in the theater waiting for the movie to start! I guess you could say she had a pretty good day today.

We bought our Christmas tree. It's not decorated and there are no lights on it, but it's up!

This Sunday we're going to Ryan and Sharaya's to celebrate Allison's 3rd birthday! Sharaya has been working for weeks to create a Rapunzel party theme. She even painted this: 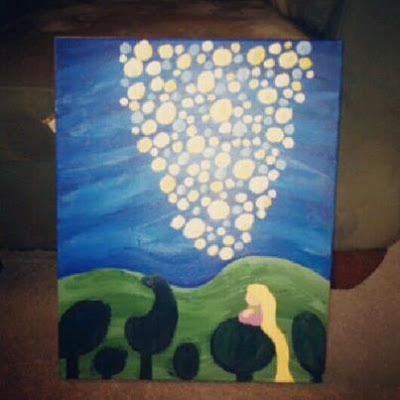 I still can't believe Allie is three. Time is going way too fast.
I've been working on our Christmas card but it just doesn't look right. I think I need to start over. We haven't taken a family photo this year so I've been trying to get pictures from our facebook pages. It hasn't been as easy as it sounds.

There will be some changes coming at work in the new year. It's something I've expected for a few months, but we're still gonna have to make some changes here at home to accommodate.

Yay!! I'm so happy the treatment went well!! That's great news. And so cool that Diana was right in front of Helena Bonham Carter - I love her!!

What a beautiful painting Sharaya made for the party!

And sorry about your hours being cut. Good luck with everything. :-)

So glad to hear about Beth...and weight loss as well. Way to go Beth (and of course Cindy)

I was wondering how Beth was doing--glad to hear she's doing well after treatment!

So nice to hear Beth's treatment went well. And how cool to actually see Diana in the crowd!! And lastly Happy 3rd Birthday to little Allison, sounds like her party will be fabulous :)