Kind of a Disaster

Well... we started experimenting with Beth's hair today.
I got out the scissors and took off a few inches. 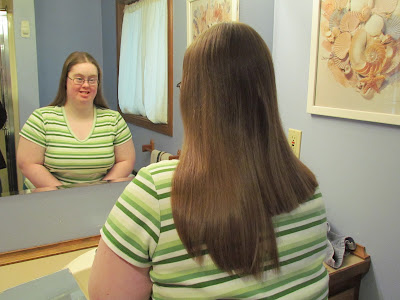 Then I started teasing it.
Diana watched for a few minutes then asked if she could try it. She was a receptionist in a hair salon for a few years so she had a better idea of how to do it. (I was a little girl in the 60's and never teased my hair!) She pulled up a section of hair, then sprayed it and blow dried it then teased it. She only did a little because she was babysitting for Ryan and Sharaya tonight so I finished working on it. The teasing did work, because it did make her hair poofier but Beth's hair is so fine it wasn't poofy enough. And by the time I got done it looked more messy, like it was full of snarls, rather than a bouffant. There's no way I'm showing you pictures of that though! No, I brushed it out and we'll try again.
~~~~~~~~~~~~~~~~~~~~~~~~~~~~~~~~~
Chuck and I were in the bedroom talking this morning when I heard something out in the hall. I peeked around the corner and saw the bathroom light was on so we knew Beth had come upstairs. But the noise didn't really sound the way Beth does when she comes upstairs. We can usually hear her on the stairs and this time we didn't. Oh well, no biggie. We continued getting ready to go to our meeting and I walked out to the kitchen. I stood there for a second because the person standing there wasn't Beth. She wasn't looking right at me so I just stared at her. After about 7 seconds I realized it was Diana!!! Last we had talked with her she was in London  thinking about heading to Belize!!! And here she was, standing in the kitchen!!!
She spent this passed Wednesday at the European Premiere of The Hunger Games. Camped out overnight, took pictures of the stars on the red carpet and saw the movie. She said it was one of the most surreal experiences of her life.
After spending time in Florida, Ireland and London she was running low on money so decided  to come home but didn't tell Chuck or me! Instead she called Sharaya and had her pick her up from the airport! Diana got to the house at about 2:30 this morning. We never heard a thing! I was so shocked! I gave her a big hug and I cried, of course. It was such a surprise to see her!
Posted by Cindy at 5:06 PM

Awwww so sweet. Glad she was able to surprise you.