"Extra! Extra! Read All About It!"

Special Needs in the news. 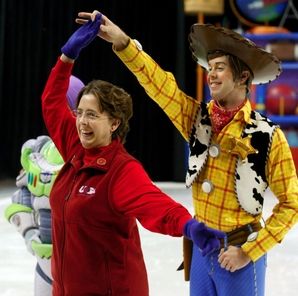 By Amy Daybert, Herald Writer
EVERETT -- Special Olympians Kristie Clark and Vicken Ouyarian skated at Comcast Arena on Friday afternoon with Woody, Buzz Lightyear and Jessie from the "Disney On Ice Toy Story 3" show.
They and eight other Special Olympians and their families received front row seats at a special performance by the show's cast members.

Clark, 38, of Everett, and Mukilteo resident Ouyarian, 50, eagerly laced up their skates to hit the ice with the professional skaters.

Ouyarian had one word to describe skating with the "Disney On Ice" stars.

This took place at an arena about 20 minutes from where we live. I thought it was great that they thought about doing this, then took the time to actually contact people and get everything set up. Way to go Disney on Ice! To read the entire article, you can click here.

These cheerleaders are from the same school that all three of our girls graduated from! They didn't have the Sparkles program when they attended but I had read about it in other parts of the country. I'm glad that 'our' school is the first one in the state to offer this program! The full article has an interview with a girl named Kendall. She attends our church and is in the youth choir with Beth as well as Special Olympics track and bowling. 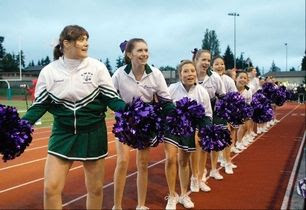 By Katie Murdoch, Herald writer
The Edmonds-Woodway cheer squad is shattering the preconceived notion of exclusivity with help from the Sparkle Effect.

The national program encourages school cheer squads and dance teams to include students with disabilities.

A knack for forming the pyramid and performing in front of a crowd that's cheering her on have been the highlights of her experience.