I took Beth to the doctor on Monday and everything looks good. She heard every sound and the doctor even said she's hearing better then most young adults her age. As we age we lose hearing below the 20 decibel level but Beth even heard at 15. She was very impressed.

They put some wax softening drops in her ear then used a syringe to wash out her ear. They had a book called The Body in the room so I was able to show Beth a picture of her ear, along with the inner ear and explain exactly what they were doing. It helped tremendously.


I've been really concerned with Beth's weight lately. She's put on 20 pounds since Christmas!! We're trying to change her eating habits, talking to her about snacking too much. She told me, "I know. I talk to myself about it. No more snack." "Great Beth! That's a very good decision!" We're buying lots of fruit this summer and we always have yogurt, bananas and oranges in the house. Year round. She loves grapes so I try to keep some in the fridge and she knows if she does have a snack, that's what she eats. She used to eat frozen waffles or pancakes for breakfast every morning, with lots of syrup but now she has cheerios almost every day. With no sugar. This morning she was nervous about missing her bus so she just had a yogurt and a cheese stick. She's doing better in  alot of areas, but when she was at the doctor on Monday, she had gained 4 pounds!
One piece of good news, the social group she's a part of, All Aboard was offering an adaptive P.E. class and when I called to sign her up, was told that the teacher had to back out. But then yesterday Beth brought home a paper that said they've found a new P.E. teacher and the class is on again, beginning next month. Thank you Jesus.
Before puberty Beth was as skinny as a rail! But then the weight began to increase. Even though she stayed active, she easily gained weight.
I've been trying to give her things to do at home. She's busy every day this week with bowling or meetings with her job class, the doctor appointment, job hunting. But when she is home, I usually ask her to vacuum, empty the dishwasher or even just walk on the treadmill. I make a list for her and put it on the counter. I came home from work one day and found everything crossed off the list, but none of it done!! I was a stay-at-home mom for 18 years and loved it. Since I've gone back to work, I can't monitor her as much as I'd like.

She wants to sit and write and watch tv. She loves to write. She writes when she's not watching tv. She writes lists of names over and over and over. Dozens of pieces of paper. She no longer throws them on the floor thank goodness and is now at least putting them in the trash, but I'm afraid of what her future is going to look like if we don't get her weight under control. 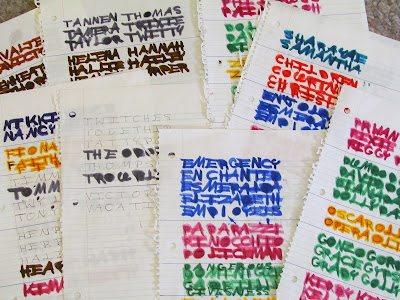 Chuck's side of the family is obese. His dad died when he was 3 and his mom developed agoraphobia. She didn't get off the couch for 10 years. And my side is all overweight so Beth needs to work harder to just maintain an average weight. She does have hyperthyroidism but that usually means weight loss, not weight gain.
Posted by Cindy at 10:52 AM

I've said it before and I'll say it again: do active things WITH her. She craves family bonding and even though she's initially reluctant, she always loves it. Even getting her mind going is healthy for her, so when you're scrapbooking, have her come in and make cards for the family. When she's listening to music in her room, make her get up and dance with you.

Judging by her enthusiasm from the video we made, she wants projects. So for Saturdays when you and Dad are working in the yard, give her a bird bath or a bird feeder or a planter and show her how to grow flowers. Give her something for which she will not only be responsible for, but also be able to see the fruits of her labor.

her handwriting is amazing!

Samantha's weight always worries me, too. I mean, she's only 5, but I think she's got a body type that will easily put on weight if we're not careful. For a child who won't eat fruits or veggies, we have our work cut out for us! I love that Beth is trying to stick to a plan. They say that if you do something 20 times it'll become habit. :-)

Everytime I lurk here I think about how much our daughters are the same. Sure wish we could sit down and talk!

Oh, what the future holds. My kiddo eats like a horse - he's only 2, but it worries me.
Hope Beth can keep things under control. I know I don't usually - it's hard!