I took Beth to the doctor today. This is day 10 of her being sick. I am one that doesn't go to the doctor often; we know most coughs, colds and flu bugs are done within a few days. But 10 days later, I decided to take her in. Didn't need to I guess. She just has a bad cold. She doesn't have strep and the doctor said she should be feeling better in a few days. I asked the doctor to put her on Zithromax anyway. I don't think she'll be going to work on Monday, even though she's been stuck in the house for more than a week. And wouldn't you know it, Seattle has had a string of beautiful, sunny days!
Here is Beth in the mask she had to wear in the waiting room. I wanted to take her picture at the doctors but she wouldn't let me. She finally agreed to have her picture taken once we got home. :)
I told her she looks like a doctor! 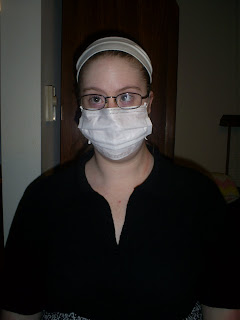 I'm like you, Cindy. Whenever my kids got sick I always hated taking them to the doctor...by the time we got in for the appointment they were feeling much better.
And poor Beth...colds seem to hang on forever! But maybe the fresh sunny air will help her feel much better!
'lje

That last comment was from me. Mackenzie doesn't even HAVE an account, but for some reason it pops up sometimes as Mackenzie. Weird!

She does look like a doctor! I'm glad she doesn't have strep and I hope she is feeling better soon!

I hope Beth is feeling better! This winter has been particularly harsh. :-(