Today is my sister Kathy's birthday. March 21, she would have been 69. I finished making the memorabilia posters last night and I'll have them delivered to my sister Deb's, in San Diego. This way I won't have to try to pack them in a suitcase.

Chuck was in the hospital for 3 days. He had an EEG, EKG, MRI, blood work... but everything has come back normal. I took him to the doctor today to have the staples removed and the doctor says he can't drive or go to work until he gets the results of the heart monitor and sees the neurologist and cardiologist, which will be the middle of April. So for now he's at home resting and doing light work around the house.

Life is moving on.

Beth brought her CPAP mask up to us about 5 months ago to show us how it was falling apart and she had it all taped together. It was at that time I got on-line to order her a new one. Weeks later we realized it had never come so we called them and they told us it had been too long since we got the original mask and she needed to see the doctor first. It was weeks before we could get an appointment. While we were there she fell asleep in the waiting room and then again in the patient room. 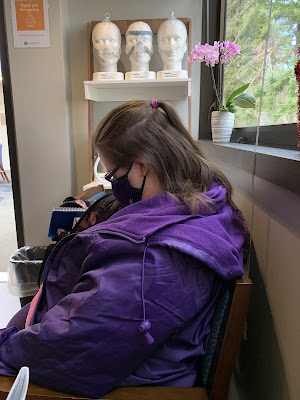 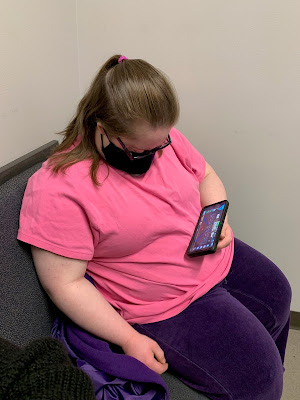 She's put on a lot of weight and she isn't sleeping at night. She'll wake us up at 3:00, 4:00 in the morning while she's laughing at the TV or singing to music. Then she sleeps until noon or 1:00 in the afternoon. Well, the new mask finally arrived a couple days ago! Since Chuck used to wear one too he made sure it fit well. 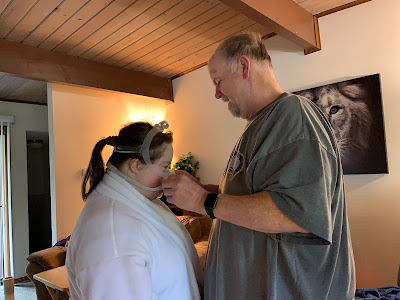 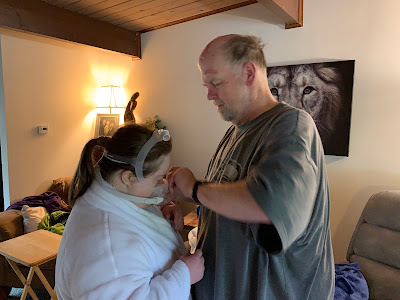 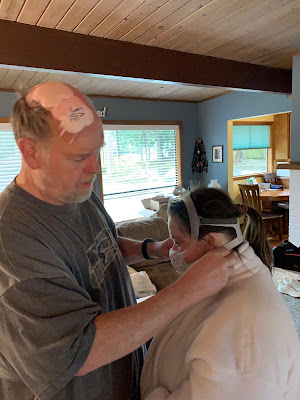 She and I went grocery shopping so she could get some distilled water for the machine and she wore it last night for the first time. I'm hoping it helps her sleep better.
Posted by Cindy at 8:19 PM

I hope the new mask will help her out. Glad your husband has time to get better. So sorry about your sister. I am sure you have great memories. Enjoy your week!

Hope the new mask helps her. Glad to hear your hubby is well.

Thanks for the update. Hope the monitor will show nothing wrong, too. Hope Beth's new mask helps her sleep better.

You do have a lot going on right now. So glad Chuck's tests have been normal thus far, and praying all will be well with the rest of the tests. Glad he is able to rest while his head heals too. Hope that Beth's new mask helps her. It will be interesting to see if it really makes a big difference for her. (((hugs))) as you continue to grieve your sister's sudden loss. I know birthdays, etc. make it more difficult. Praying for God to comfort you as well as give you peace.

I hope Beth's new mask will help. And that you get some definitive answers about Chuck soon. That's a lot of worry for you.

Isnt that frustrating that they cant figure out why something that serious happens? Hopefully the other doctors will have more insight.
Hopefully Beth is getting some sound sleep. I'm sure you're ALL hoping for that - LOL

You are a rock for your family, my friend. I pray that the new mask works and she and you can get much-needed sleep. Also prayers for your husband.

Bless your heart. I am so sorry you have so much to deal with right now. You must be on quite the emotional roller coaster ride. I hope Beth is sleeping better. Insomnia or poor sleep can be so hard on a body.

Glad that your husband's tests are coming back negative but that doesn't minimize his issues. Praying the doctors continue a very exhaustive examination into what could be causing his problems.

Happy heavenly birthday to your sister. Hope your celebration of her life is comforting.