An Update on Chuck

Chuck had his second infusion today. It started with a visit to the dermatologist first thing this morning and he counted 13 nodules (up from 8 last time we were there) and another tumor behind his ear.

Plus he found a spot that looks suspiciously like basal cell carcinoma so he did a biopsy. He said it's very mild, it won't spread and if it is cancerous they'll be able to get it all with surgery. He was very casual about it. We should get those results in about a week.

But... all of this is expected because the medication takes a few weeks to really begin to work. It's natural for the cancer to grow during that time.

The view from the waiting room. 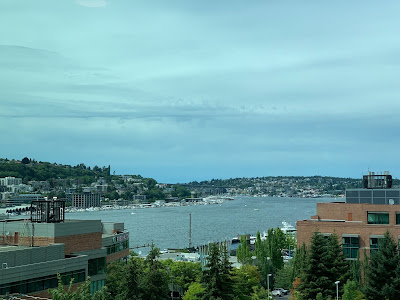 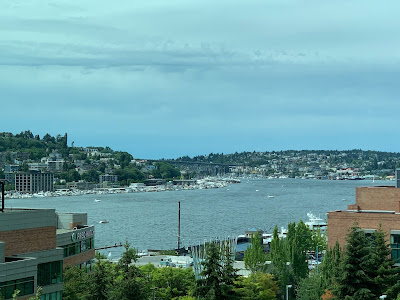 We left for a few hours (bought a new microwave and Chuck got a new Smart watch) then we stopped at Lake Washington for a few minutes before heading back for more appointments. 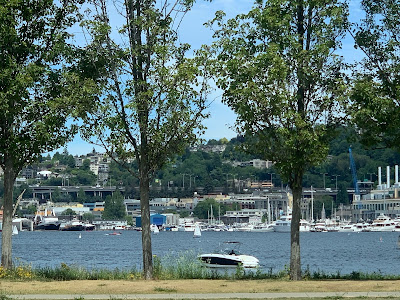 The nurse practitioner felt so bad that we had to come back and she told us that it's perfectly okay to ask the scheduler to try and get all the appointments around the same time.

They did a blood draw and we found out that everything came back normal. Everything! That's a direct answer to prayer!

Next they put in the IV line, then we headed to the back for the infusion. He didn't get a lot of sleep last night so he dozed off during the procedure. (He worked until 1am.) We're thankful they got us in early. We actually left there before the time of our original appointment! So now we wait and watch for this cancer to shrink! 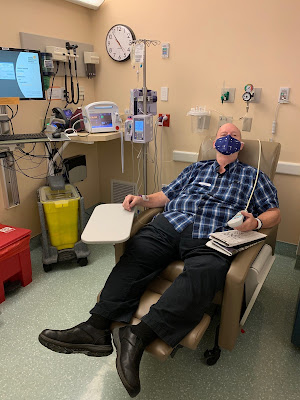 Cindy,I'm so grateful for today's medical technology. I think back to the early days of medicine and how doctors just didn't have the knowledge to treat cancer.

Praying all goes well with his treatment. My aunt has been going through treatment for breast cancer and after a few months the tumor has shrunk. I got her a pink breast cancer mask. Be blessed!

Yep - we will definitely wait for it to shrink!! Lifting up prayers it does just that FAST!

The good thoughts continue to come your way, Cindy. All the best for Chuck.

Bless your heart and your husband's. I have had to have biopsies and the waiting is the worst. Praying you soon have the results back and a plan of attack in place if you need it.

You left me a sweet message on my blog about considering creating a bucket list. I would love for you to join me in this activity. It doesn't have to be a bucket list as in things you want to do before you die! But a bucket list of little things you would like to try this summer. A new restaurant. Movie night. Getting a manicure. Massages for the whole fam. I try to add health and wellness activities as well as spiritual and some things just for fun. I have a bucket list email group that I send the link up code to and the optional graphics. If you would like to be a part of the group, please let me know. My email is mommyhon333@hotmail.com

I am praying for Chuck. God's got this!

Praying everything comes back good. So glad all went well during your visit. The scenery is gorgeous! Glad you could see something beautiful and relaxing while you waited. God is with you and He is working on this. Just relax and trust Him. We will keep praying.