I'm Not Sure You Could Really Call It A Date

Beth told me last Friday that her and Nick were going out for breakfast 'tomorrow'. He told her she could pick the restaurant this time, as long as she picked IHOP or Dennys. :)

I asked Beth if his mom was available to drive him. I told her she needed to check with me and dad to see if one of us was available to drive them. What time would they meet? Which restaurant were they going to? Her and Nick were texting back and forth when finally she said that Nick wanted me to email his mom. Too many questions I guess.

We met at a restaurant that was about half way between our homes, Chuck and I arrived first. Beth had asked Sharaya and Diana to come as well and Diana told us, "Beth is riding with us, the cool kids!" Well fine then! :)

Chuck sat at the 'old folks table' and the waitress took me to the table where the kids would be sitting. Nick and Loren arrived next and Nick came over to give me a big hug. He sat next to me and began talking about what he was going to eat, how important it is for the man to pay and when is Beth coming?

When the girls got there, Nick got up and gave Beth a hug, I think he called her Sweety. Beth and Nick sat next to each other and Sharaya, Diana and Allie sat across from them. We could hear them talking and laughing but Diana was the only one I could see. Is it considered a date if you're with your boyfriend and your sisters? Chuck, Loren and I were kind of in a different room and we had a great breakfast. It's been fun to get together with another mom who has an adult child with Down Syndrome. There's so many issues that just aren't there when your kids are little. We talk about jobs and transportation and living away from family. It's amazing to think that we're in this stage of life with Beth.

After a while, Diana texted us saying they all wanted to go to the mall. I explained to Beth that she was going to ride with Nick and his mom to the mall, then her sisters would meet them there. She was definitely okay with that! She got to sit in the back seat with her 'babe'!

Diana told us later that they all got to the mall and she, Sharaya and Allie went one direction and Nick and Beth went the other direction! On the drive home Beth told her sisters that they talked about how many kids they were going to have. Nick wants to have 2 kids some day but Beth isn't ready yet. Oh my.


(Thank you Sharaya for taking these pictures!) 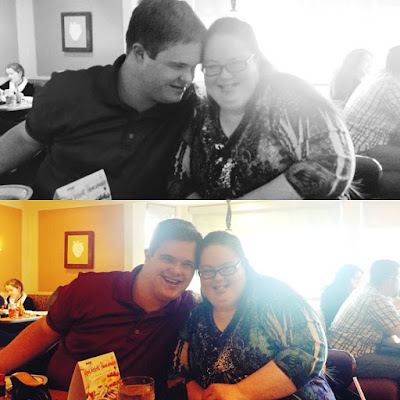 Love this soooo much!

That sounds like a fun time....exciting to hear how their relationship has really taken off.