We walked into the medical clinic yesterday and Beth handed her picture ID and insurance card to the receptionist. We no sooner sat down in the waiting room when they called her name. Chuck stayed there while Beth and I followed the doctor.

Through long halls and two more waiting rooms, he pointed to a door on the left. Beth sat down in the chair and I was able to stand right by the open door. These signs were everywhere. There was a big one on the door, plus smaller signs on the cupboards and the equipment. They certainly got my attention. 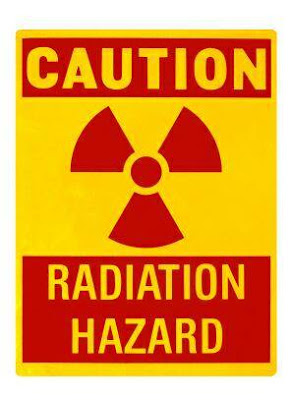 On the counter there was a small barrier, maybe a foot in diameter that, if you were standing in front of it, would protect your chest from contamination. There was a clear sneeze guard type thing on top of it, sort of at an angle so you could look over the barrier and see what was on the other side.

Doctor T put on some gloves and stood in front of the barrier. He picked up some long handled tongs and picked something up from behind the barrier. When he turned around I could see it was a small vial. He told Beth not to touch the pill inside, but to put it directly into her mouth. Still having gloves on his hands and holding the vial with the tongs, he handed the vial to Beth. She took it, bare handed. As he turned back around to put the vial down, I watched her begin to pour the pill into her hand.

"No Beth! Not in your hand! Just put the pill directly into your mouth." Doctor T spun back around just in time to see her do it the right way. Whew! Not sure what would have happened if she had put it directly on her bare hand, but I didn't want to know!

She drank a small cup of water and that was it. She got up and Doctor T lead us back down the halls, through the two waiting rooms to where Chuck was. He looked up, "Wow, that was fast!"

Beth sat in the very back of the van on the way home. She put on her headphones and sang most of the way home. She's been downstairs ever since, only coming up to use the bathroom. We've gone down a few times to check on her (besides bringing her meals) and she's always doing well. They said she could have neck pain because the thyroid sometimes is swollen during this treatment, but she hasn't had any side effects.

On the ride home yesterday she asked if we could buy her The Little Mermaid. Her copy of the movie is so old it doesn't work well anymore. As she begins day two of isolation, Chuck and I are gonna go buy it for her.
Posted by Cindy at 9:28 AM

Email ThisBlogThis!Share to TwitterShare to FacebookShare to Pinterest
Labels: Adult with Down Syndrome, Radiation

Hi! I'm visiting from the blog roll at The Bates Motel.

I'm always looking for bloggers who have older kids with disabilities. My step-daughter is 11 with down syndrome. Our next big step with her is the "becoming a woman" part that makes her dad nervous. Hehehe

Well done for getting through the first stage, I hope the isolation bit goes quickly for you all.

I realized that I was holding my breath while I was reading this. Whew, glad it's going well so far!! ((hugs)) to you all...

Good telling... I was holding my breath too! Especially when the doctor turned his back. i was also thinking ... good thing Beth knows how to swallow pills! Jessie still doesn't! Be healthy! and radio-safe!

Glad to hear - so far so good. Hugs to Beth from all of us!

Nice to hear it's off to a good start! The Little Mermaid is one of my favorites too :)