A Night She Will Never Forget

Beth was up early on Saturday. I was surprised to see her up so early until I remembered... tonight is the prom!

Chuck and I had a long meeting that morning so as soon as I got home I started curling her hair. Diana and Beth had already decided on a hair style, but Diana didn't get off work til 4:00 and we needed to leave by 5:15 so I thought I'd get started on the curls.

Beth seemed a little sad so I asked her what was wrong. She said that she wanted Diana to do her hair. I told her that Diana was going to style it, I was just helping her with the curls.

"Okay. Cause Diana does it better than you."

Diana got home, did her hair and we got her dressed. I must say, she looked beautiful! She wore a black and gold lace dress with a small black jacket over it. 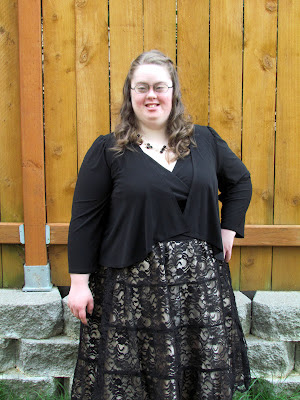 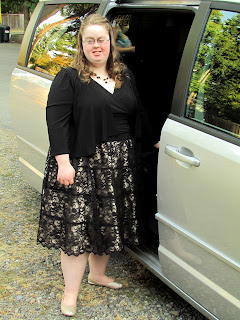 We arrived at the venue (it was a dance studio) and they had wrist corsages for all the girls! There was live music and food and flowers and gorgeous girls and very handsome guys! 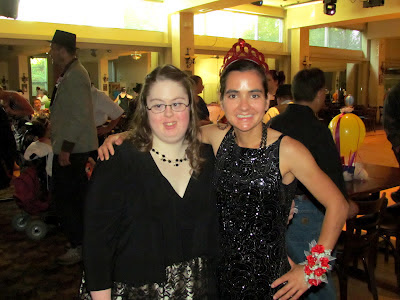 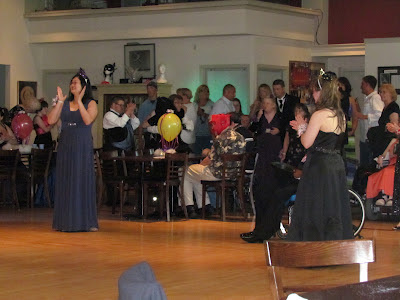 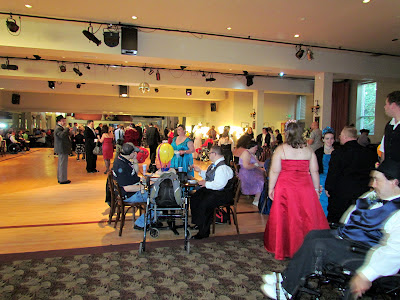 The theme was The Sky's The Limit and their table decorations were Chinese food containers with 4 straws and a balloon. Very creative! 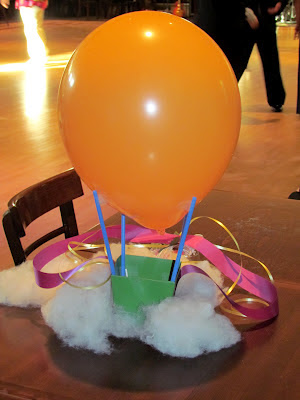 At first, Beth, Diana and I stood in the back and just watched. I asked Beth if she wanted me to stay and she said yes. I asked her a few times, just to make sure. :) We asked her if C was there but she hadn't seen him. (Remember C is the guy she was hoping would ask her to the prom but he hadn't been bowling for the last few weeks.) Chuck and Diana left to run errands and I found a seat on the side of the dance floor. Beth sat on the same side, but at the other end of the room from me. She sat there and she watched. I watched her as people came up to talk and she just hung her head. I watched people come ask her to dance and she would say no.
This is actually her reflection in a mirror. I spotted her between some posts and was able to keep watch without her knowing it. Sneaky I know. Are you taking notes? :) 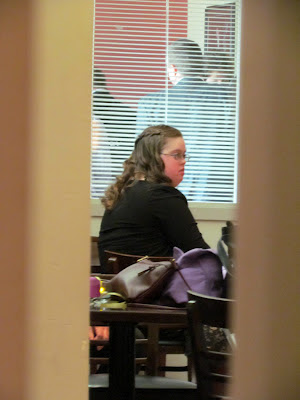 I finally saw a guy dancing by himself and did a little match making. Lots of moms were out there, getting their kids to dance with others. Some of the moms were even out there dancing! It was fun! I saw M and asked him to ask Beth to dance. I went over and pulled Beth to her feet, she did NOT want to move! 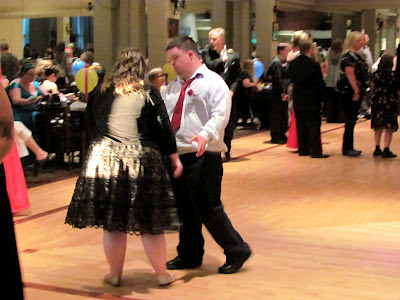 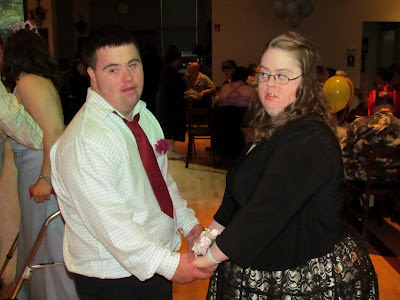 M's caregiver came over to me and said they looked like such a cute couple. She hollered over to a friend, "M has a date!" I think she was as excited as I was that they were willing to hang out together. I also asked them if they wanted to get their picture taken. I took this while the professional photographer was setting up the shot. 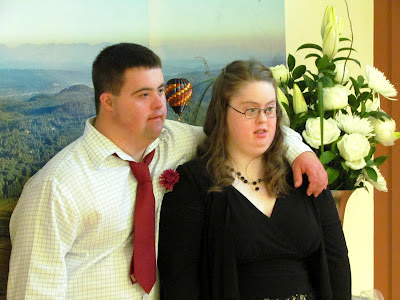 After the picture, Beth went over and sat back down in the corner. She sat there the rest of the evening and we left a few minutes before it ended. As we walked out she seemed kind of sad and I asked her what was wrong. "I don't wanna talk about it." Okay, fine.
We get in the car and Diana asks her how it went. Beth didn't respond. Diana asked if C was there.
"Yes."
We all chimed in, "He was??" "Beth why didn't you tell us?" "We wanted to meet him!" "Why didn't you point him out to us?"
It was at that point she burst into tears. "He was dancing with another girl!!!!"
I got out of the car and took her out. I hugged her as she cried. And cried. My heart was breaking for her and I cried too.
That whole time she sat there, watching the love of her life dance with someone else. There was nothing I could really say right then so I just let her cry. I'm having a hard time holding back the tears even now.
We stood there for a few minutes and she composed herself. We had planned to go out to dinner to celebrate her big evening and she said she still wanted to go out. After some root beer and pasta at Applebees she began to feel a little better.
After we got home I went downstairs to help her out of her dress. I told her I was sorry her evening didn't turn out like she planned but she still had a little fun, right? "You got to dance with M and get your picture taken and you enjoyed the punch and the fruit. And you have the cute corsage, right? Didn't you have a little fun tonight?"
She nodded and kind of smiled, "Maybe."
Posted by Cindy at 4:19 PM

Beth looked stunning! I am so sorry to read that her heart got broken:(

She was beautiful (IS beautiful) but the end of your story made me cry! Oh Beth, oh my. You so deserve to be loved, to have some one crush on you! Because you are so crush- and loveable!!!

Beth looked beautiful in that dress--excellent choice! So sad that her big night didn't go as she planned, but tell her there are lots of fish in the sea. She's a beautiful lady and she'll find the right guy for her!

Beth looked gorgeous - great dress! So disappointing about C. I hate seeing my kids hurting. Piper's big school crush isn't in her class this year. She was a bit disappointed. And then later we found out he is repeating kindergarten, so he's not in the other first grade class either. I think that somehow made her feel better ;)

Well done to Beth for getting through the event, it must have felt hard for her. She looked beautiful, and it's lovely that she could tell you what was going on and cry with you. I hope it feels less painful now.

Ohmygosh, I'm tearing up reading this!!!! Poor Beth!! What an awful feeling that is. I love the photo of her with M., though, and she looked absolutely STUNNING!!! It sounds like a wonderful night, other than that two-timing snake (joking...LOL). :-)

I just want to hug her and you. So hard, I'm sorry it didn't turn out better!

Oh, this had me in tears as well...It's so hard as a Mother to watch our kids go through any type of heart break...Maybe it's best she didn't point out C, you might have had to walk across the dance floor and ring his neck! lol...Kidding of course...Kind of...

So sorry to hear things didn't work out with C :( But Beth looks absolutely gorgeous -- LOVE the dress, Beth!!! -- and it looks like maybe she had some fun with M!

Oh what a beautiful dress! and you and Diana did a great job on her hair! I'm sorry to hear that C was dancing with someone else :( I wonder if he simply didn't know she wanted to dance with him ... not that it makes it any easier. I'm sorry she had her heart broken, but it does sound like 'maybe' she had a little bit of fun :) Maybe she can talk to him the next time she sees him at bowling and try to set something up with him.

Beth is gorgeous! And oh my, how I don't look forward to the heart breaks... But you handled it so well. I'm taking notes!