We have learned that the pets love bubbles. Well, Poppy and Moxie love them, Maya isn't too sure about these glistening things that float and then disappear right before your eyes. See Maya protecting herself in the cardboard fort? 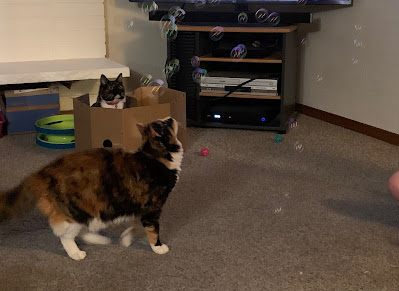 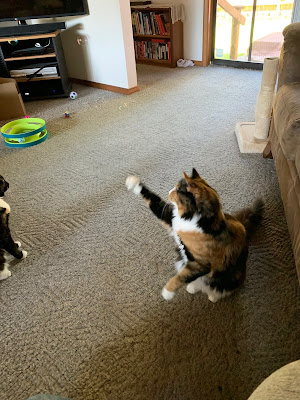 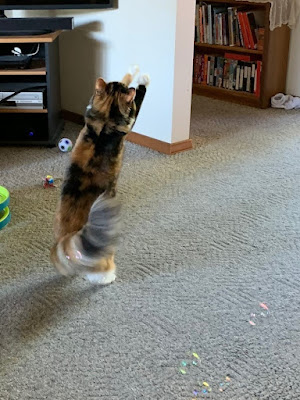 Poppy is an absolute maniac with them. We get the bubbles out about once a day and give these guys a workout! 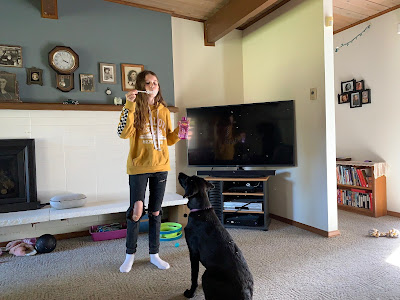 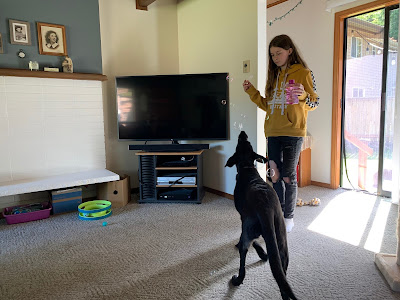 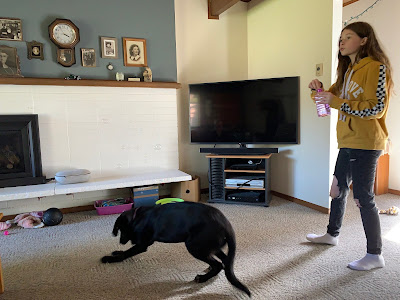 Some friends were getting rid of an old table and I've been wanting one behind the couch for keys and stuff right by the door. Now the cats use it as a perch to look out the window and earlier today we were looking for Poppy and Chuck spotted her laying under it. It's getting a lot of use! 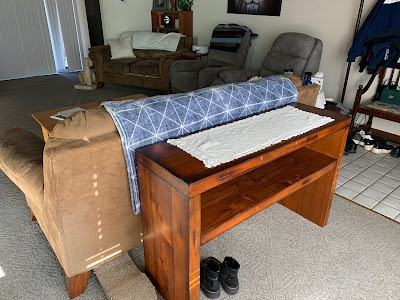 At Beth's last dentist appointment he mentioned she had a cavity and the tooth needed to come out. He said the tooth looked really fragile and he was afraid it would break into tiny pieces so she had to have oral surgery. I was nervous about it so I waited until the morning of the appointment (the 25th) and tried to be casual (she knew she was going to the dentist to have a tooth pulled but that was all) when I told her the doctor was afraid the tooth would break so they were going to give her special medicine that would let her go to sleep and when she woke up we'd go home. She was very nervous when we were walking into the building.

We got her checked in and they let me come back to the room. I could tell it was sterile so I just stood at the door while they put on the BP cuff and put a paper hat on her. I told her I needed to go move the car (I had actually parked in the wrong area) and I'd be right back. I sat in the car for about 10 minutes, went into the waiting room, grabbed a magazine, and I'm not kidding, the nurse came out before I could even open it, to tell me they were done and she was ready to go!

They wheeled her out and helped her into the car. She was so groggy! I helped her into the house and as I'm unlocking the door she quietly says, "I just wanna take a nap." I laid her on the couch and she was out! The next day she said she didn't remember being in the wheel chair!

The tooth came out in one piece, there was very little swelling, and she hasn't had any pain. I gave her ibuprofin before she went to bed that night but she hasn't had any pain at all. All of these things were such an answer to prayer!  She stayed home from work on Thursday and Friday, and she's doing great. Looking forward to church tomorrow. That pink thing on her arm is the stretchy gauze stuff that covered the IV site. 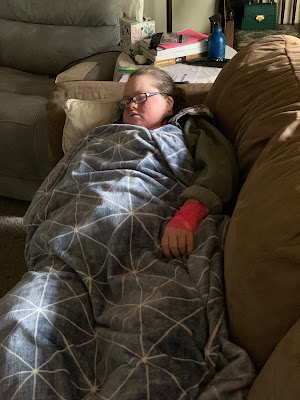 I'm so glad to hear it went well, how wise to wait until the morning of. One of our girls was born with a heart issue, and had to go to the pediatric cardiologist every six months for most of her life, until the drs. determined once a year was enough. She has anxiety issues, and would absolutely break down and throw up on the way into their office. So I did the same thing, didn't mention it until it was time to go. (When she had to go to the orthodontist for the first time, I told her we were going to get donuts, which we did, but afterward, oops, we have an appointment, honey. She still threw up.)(but at least it was donuts). :)
Della

Bless her heart. I'm so glad it all went even better than anticipated! Good news, praise God! Thanks for the update!

Those bubble pictures are adorable. That is a lovely table you got. So happy to hear that the pulling of the tooth went so well. Have a nice weekend.

So happy to hear that the dental procedure went so well and that Beth is feeling fine now. That was certainly an answer to your prayers. Now, those bubble pictures with the cats and dog are so much fun! I love bubbles too, and think they are great entertainment! That table is a great find! My son builds tables similar to that to sell in their store in St. Augustine. They call them "console tables", and they are a very popular item. He gets lots of custom orders for them. I suppose other people's cats probably like them too. I enjoyed your post. Glad all's well that ends well!

I'm so glad Beth is doing well after the surgery. And I love the cat pix -- I need to get a bubble machine!

That bubble time is fun. Glad all went well with that oral surgery!

I am so glad it went as well as it did for Beth. Bet Mom was nearly as nervous as she was....

So glad it went smoothly for Beth - & glad they got it before it broke into a ton of pieces & they had to dig the rest of it out!