It Started With Just a Bump On His Head

About a year ago Chuck bumped his head getting out of the car. You know how you bump it on the top of the door frame? Well a small bump formed and it became a blood blister. Chuck is good about regularly going to the doctor and so he's kept an eye on it.

For a long time it stayed the same but a few months ago it started changing a little bit and at his last visit the doctor decided to do a biopsy. Turns out it is cancerous, it's melanoma. 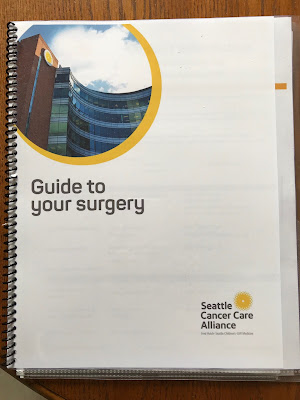 We had the first appointment with the oncologist and she explained what all would happen during the surgery. There are 3 satellite nodes that have appeared recently and we're hoping and praying it hasn't gone into his lymph nodes.

We had planned to go to Nashville next week and they were going to do the surgery after that but the trip's been canceled now due to the coronavirus. We had still planned to go but then one by one all the sites we had wanted to see were closing so that made it easier for us to make that decision.

So now we're not sure when the surgery is going to happen. I will admit I held my breath a little when we pulled into the hospital and the big CANCER sign greeted us. It's a scary word but I know this hasn't taken the Lord by surprise. Chuck feels great and even forgets the spot is there on top of his head.

And speaking of the virus, how are you doing? Chuck drives a city bus so he is still working (although there are only 2-3 people on the bus now instead of standing room only!) but our church has closed so Beth and I are at home. It's been a nice break to be honest. Sharaya is a Nanny so she's still working (although the parents she works for are working from home) and the place where Diana works has closed.

There doesn't seem to be a consistent nationwide rule for how to combat this virus. So however you're coping with this, I hope you and your family are staying healthy.

Take care of yourselves.
Posted by Cindy at 3:55 PM

Oh, no! I hate that formidable foe, cancer, so much! I am praying for Chuck, that surgery would be successful and every trace of cancer be removed from his body!!

Being homebound is not a hardship for me. I love being in my home. I have oodles of projects to keep me busy, and I can talk, text, or Marco Polo with my family and friends.

I hated not being with my church family on Sunday, though!

Praying right now for the best outcome for Chuck's bump. God is sovereign and nothing is a surprise for Him. May God cover you with his love and comfort and rest!

I see you are connected with Patti. Thank you for stopping by my Whimisacle Wednesday meme today! I will be praying for your Chuck and hope they get him in for surgery soon. Melanoma is not one to sit quietly. Do keep us posted!!

Cindy,
I will be praying for you and Chuck.
HUgs and love.

That "C" word can be really scary, I pray that everything will be okay and that they will be able to remove everything.

It's just now starting to affect our area, Bob and I are self isolating because I am high-risk. We do need to go out for a bit tomorrow, but we will keep our distance from people, use hand sanitizer and wash our hands the moment we get home. It's very hard to completely quarantine yourself.

I'm so glad that the have closed things...our church closed, schools are closed, many stores are closed in our area. All we can do is keep praying, stay calm and remember that God is in control :0)

Keep us posted, you will be in our prayers.

Praying now for Chuck and for his upcoming surgery. Praying they will be able to remove it all at once and not have a lot of treatments to follow. May God give you peace of mind and spirit as you face this uncertain road ahead. God has already gone before you and He will be there with you all the way. Please keep us informed and we will be here to pray.

Oh I hate cancer! I will certainly be praying. As for coping with Coronavirus crisis, it's been hard not being able to be with my church family and my friends. So we talk by phone, text or email.
I cope by crocheting,reading my Bible or cleaning.

Oh my gosh!!!! I hate to hear this... & I know the stress of waiting is never easy - especially waiting when so much EXTRA stress is going on with this virus.
Lifting prayers for all of you

Holy cow I hope all goes well with your husband, that sure is a scary find! This virus thing sure puts things into perspective on what's important and being prepared. Isn't it something that just a year ago we were encouraged to do the Come Follow Me at home with the church support. By doing so, it got us in the habit of studying at home. What insight and I don't believe it is a coincidence that now we are unable to attend church. We were prepared and didn't even know why. Having a good supply of food and house items have always been encouraged by the church, what a great time to be prepared and not have to worry that the world is shutting down and we need to run to the stores only to find depleted shelves. I am so grateful for a prophet who leads and directs us through the Lord. I know the Lord is mindful of your husband and hears your prayers.
X0X0

I came by to thank you for coming to Marmelade Gypsy and found your writing so beautiful and heartwrenching. Deepest wishes that you and Chuck can find the right hospital and treatment sooner rather than later. The virus itself is scary enough but knowing that there is the cancer is truly frightening and I know you want this resolved as fast as possible.

We're doing OK, sheltering at home. Rick will shop for me and I can take walks or go in the yard or for a ride, so that's good. I'll be more at ease after the first two weeks or so since contact with people is over but I'll still stay in place for as long as it takes. This one is a big deal. And since I'm relatively self contained, it isn't a hardship, but I just miss the control of not being able to do something or see someone when I want. This may be good for those of us who survive. I so value my docs and the grocery people.

Please be careful. And thanks again for visiting.

Lots of love to all of you Cindy

Praying for the spot on Chuck's head.
My son and daughter in law are working from home yet they are taking their son to his daycare lady. I don't get it but written into the Govenor's shutdown for CA, daycare can stay open. We are home and not leaving our house anytime soon. However we can't see the baby since it is always possible that the other children's parents are still working in their offices.