Beth and I drove to Bellingham on Friday - about an hour and a half from our house - so she could see Nick. His parents have been on vacation and he's been staying at an... I guess it's like an assisted living place, but for adults who have special needs.

He gave us a tour of his place and it was pretty nice! Each client has their own space and a staff member lives in a different part of the house. It was fun to see where he's been staying the last few weeks.

But before the tour, Beth and I picked him up and we went to Red Robin for lunch. It had been more than 2 weeks since they'd seen each other and they were so happy to be together again! 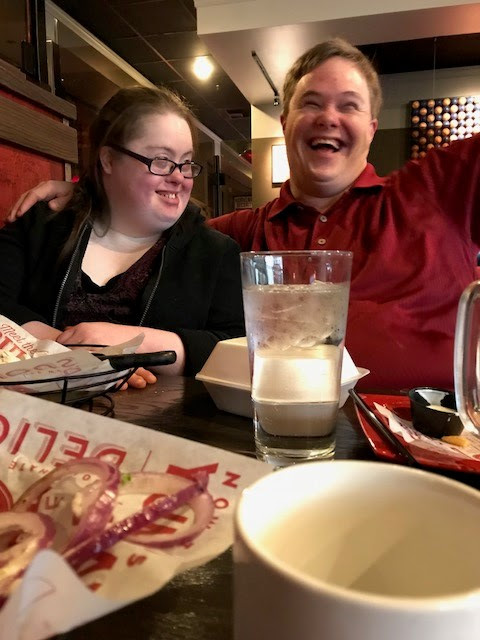 After Red Robin we went to Bellis Fair Mall and walked around there for a while. 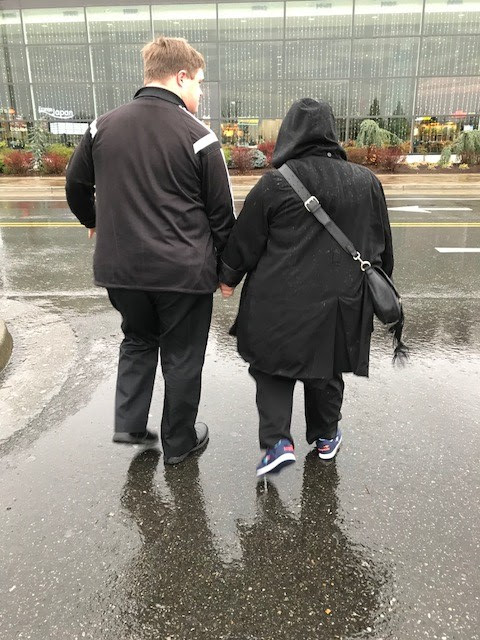 We walked by some of those massage chairs and Nick said he wanted these in their living room when they get married so I offered to pay for them to use them for a few minutes. 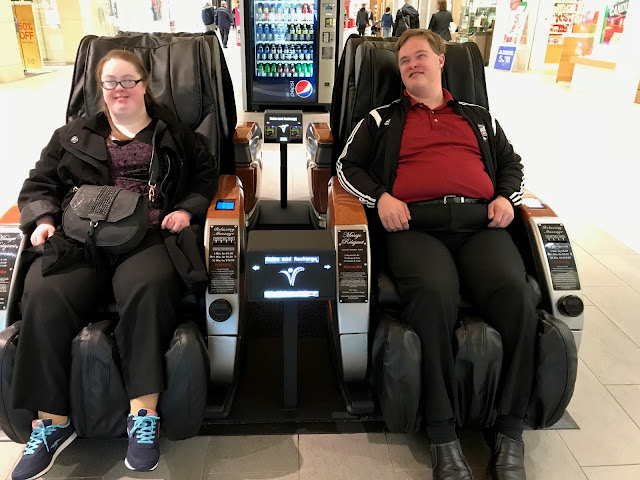 Oh my gosh you should have heard them! They both kept talking about how good it felt and how they wanted one in their rooms. At one point Nick puts his head back and very slowly says, "H-a-v-e m-e-r-c-y!! 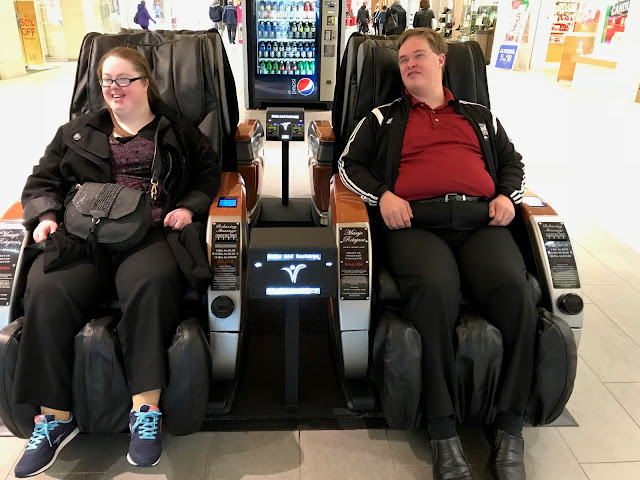 At the other end of the mall we found Target and you just can't go into Target without checking out the electronics department! Here he is telling her about one of his favorite movies. 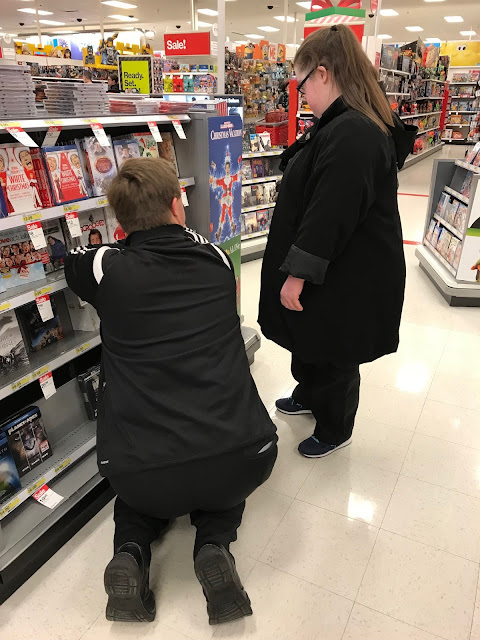 We even stopped to take a Christmas photo! 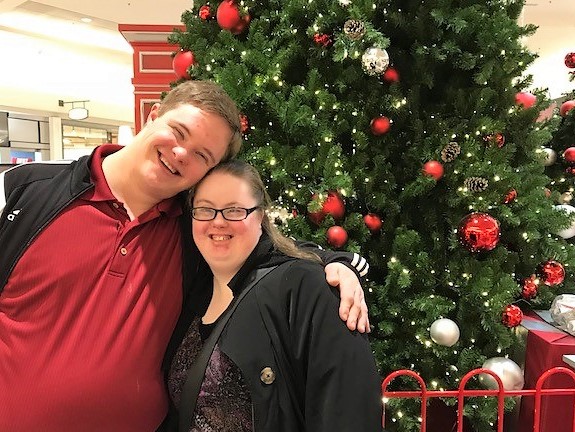 We dropped him back off and headed for home. After a little while I needed to stop and pulled off at a rest stop. 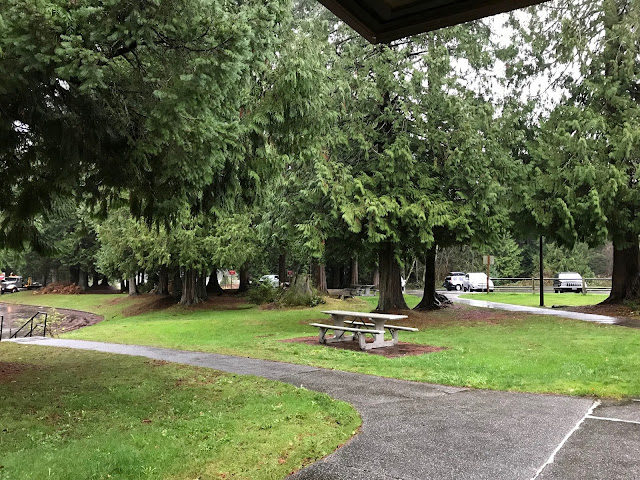 I expected her to wake up when I turned off the engine, but nope! I actually had to shake her a little to wake her up. 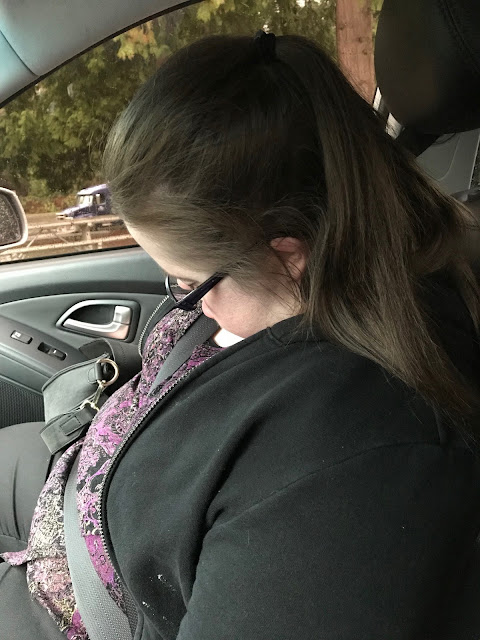 She came with me and then we spent the rest of the ride home singing Christmas carols that came on the radio!

Have you reunited with loved ones this year?
Posted by Cindy at 7:05 PM

This post was adorable...love is love, and you can tell these two really do love each other. What a fun time you guys had, Red Robin...yum, shopping, getting a massage, what a day!! I loved the Christmas Photo, they are a very cute couple!

But my favorite...singing Christmas carols on the way home, a perfect ending to a perfect day.

Give Beth a hug for me!

Such a happy post!!!
What a lovely day for Beth!!!
I loved the photos and can feel her happiness right through the screen.
Have a cozy day, my friend!

Ahhh.... beth just looks so giddy happy too.
How good a momma are you taking her to the little reunion

Oh boy, we did this same drive on Sunday and beyond Bellis Fair on Meridian to Canada. How nice that you could make the trip for the reunion. Looks like it really tired Beth out! ;)