Those words became part of Beth's vocabulary when she was just 4 or 5 years old. When we would ask her, "Do you need to go potty?" She would respond, "I no haf to", then usually pee in her pants a few minutes later. We didn't have unusually high expectations; we began potty training when she was around four. Definitely old enough to understand the 'feelings' of needing to go to the bathroom. Or so we thought.

Sharaya was almost two and we hoped that potty training them together would help Beth. We could make a game out of it; 'sisters' could sit on the potty together; they could encourage each other; they would both be out of diapers at the same time! Or so we thought. 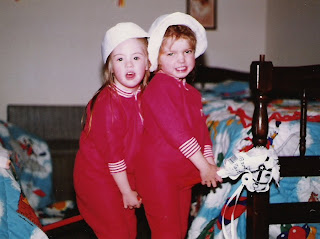 So, with this warped sense of thinking, potty training began at our house. We bought the pull up type diapers and purchased one of those toddler size toilets that sit on the floor and make it look like you have tiny elves living at your house. I would set the kitchen timer (there's that timer again, cheering me on!) for 30 minutes and every half hour I would sit them on the potty. Sharaya would go, Beth would not. Until she got up from the potty. No matter how often I put her on that thing, she would pee moments after getting off! After just two weeks, Sharaya was completely potty trained. Including nights. Beth however, continued with this struggle for a long time. 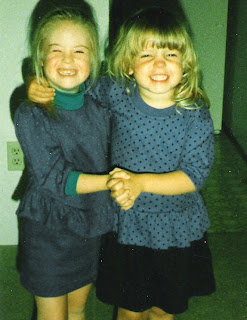 We were house sharing at the time all this potty training business was going on. We were upstairs and our close friends, the Gillums were living downstairs. Pam had an aunt and uncle visiting from out of town. After Pam introduced us they went downstairs and I went back to my dishes. Now, I need to tell you that this was during a time in Beth and Sharaya's life when they loved to play in our car. If we happened to leave the door unlocked they would climb in and play until they got caught. You probably already know where this story is going. I looked out the kitchen window at their car, to see Beth flop over the front seat into the back! AAGGHH!! I was horrified! I tried to get as much dirt off the maroon velvet seats as I could and considered for a moment, sneaking back inside and not saying a word! I knew in my heart though, I needed to do the right thing and teach my girls this valuable lesson.

We slowly made our way down the stairs as I tried to find the words to explain the situation.As Pam's aunt was graciously accepting our apology, I began to hear water running. I looked down to see Beth boldly peeing in her pants! It was running down her legs and onto the carpet! Oh my word! Red faced and speachless, I hurried the girls upstairs, cleaned Beth and layed them down for a nap!

Beth was 7 years old when we could finally say she was completely potty trained. Including nights! I will say we didn't train consistantly all those years, we'd push it hard for a while, then stop. I got discouraged with her lack of ability and some days thought it would never happen. We just kept trying and finally she did it! She matured to the level of understanding, grabbed that brass ring and moved on to the next challenge! Biting. 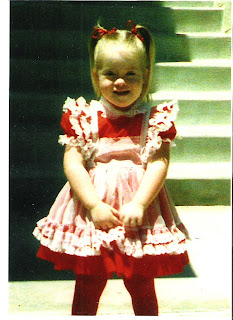 Thanks for this post! I just bought a little potty for Joel to try after much encouragement from his teacher. I just said to Keith last night that I really don't think he is ready at all and that I don't think he will be for at least a year or two (when he is 4 or 5). I just don't want to have expectations of him that are not realistic and then be anxious about it. I think I am going to wait after reading your post. It is very encouraging to read that although it took a while Beth did learn!

Wow, great post. We've been going through potty training for about 2 years now. Sammi will go, but just won't always tell us when she has to. Urgh. I am glad Beth did make it, thought! In their own time, right?